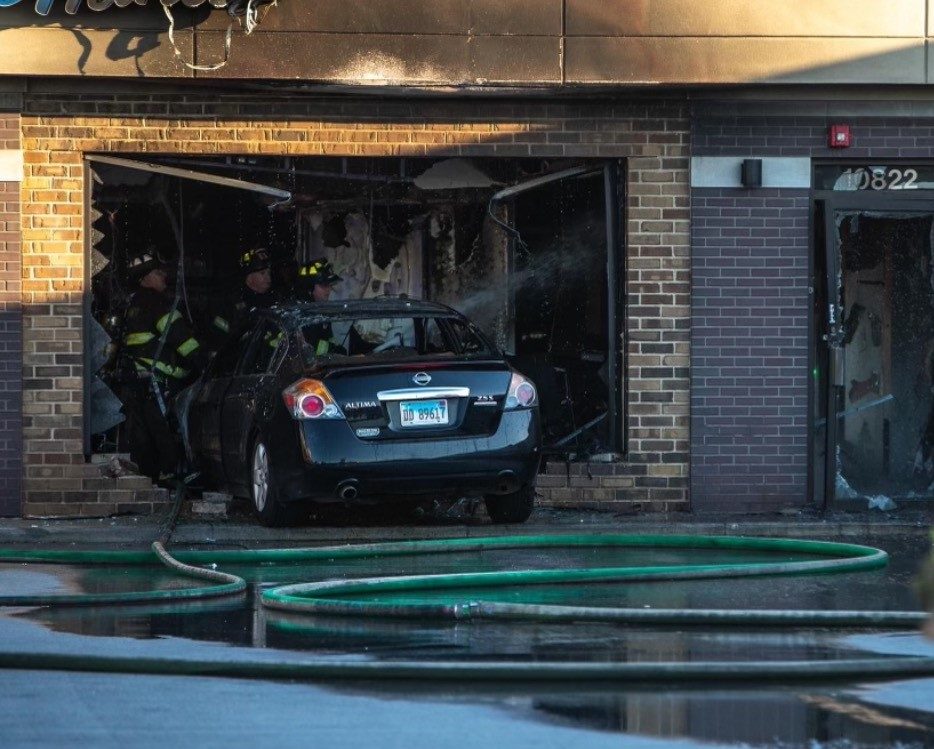 The owner of Scissor Hands salon in Oak Lawn says reopening will be a long journey. (Supplied photo)

The Scissor Hands hair salon, a longstanding business in Oak Lawn, sustained heavy damage Saturday night when a car careened out of control through the storefront at 10822 S. Cicero Ave., destroying the interior of the salon.

Jayne Molony, the owner, said the salon had closed at 4 p.m., about three hours before the Jan. 9 accident occurred, so no one was inside.

“Obviously, the most important thing when something like this happens is that no one was injured,” said Molony, a Burbank native who has owned the salon for the past six years.

“The salon itself has been there for about 30 years,” she noted, explaining that she started working there six years ago.

Molony, who now lives in Alsip, said that according to witnesses and security footage viewed by police, the Nissan Altima that struck the building was headed south on Cicero Avenue with its engine already on fire.

“I was told that the vehicle has a mechanical malfunction and was already on fire. Apparently, the brakes didn’t work so the driver turned off Cicero into our strip mall and went through the window. The car was already on fire, and the flames spread inside upon impact,” she said.

Molony said the driver “appeared fine” when she arrived.

“It does appear that the vehicle was having mechanical issues. The report indicates that a witness observed the vehicle to have been on fire prior to striking Scissorhands,” said Vetter.

He said the male driver is a juvenile from Oak Lawn so his name, age and other details will not be released. The driver escaped without any serious injury.

“The crash remains under investigation and there have been no charges filed,” Vetter said.

Molony said 13 stylists and other staff members employed at the salon are affected by the closure that will last for months while the salon is rebuilt.

“We’re expecting this to be a six-month journey,” said Molony.

“I have spoken to our landlord, and he will be putting in barriers during the reconstruction process so this won’t happen again,” she said. Frank Kopanis owns the strip mall, which includes a couple of restaurants and other businesses. The hair salon is on the southern end of the strip mall, so most of the businesses weren’t affected. But the Coin Laundry laundromat that shares a wall with it was still closed on Tuesday, and some damage was apparent inside.

Molony expressed thanks to the area salons that have offered space to members of her staff while repairs are being done.

According to information on the salon’s Facebook page, at least two of the stylists have found temporary space at Clip Artist at 4736 W. 103rd St., Oak Lawn.

“Several salons have offered space but it is not as simple as finding a chair anywhere,” explained Molony. “Some salons have different ways of doing things or use brands we might not be familiar with.”

“We are working on getting everybody a space to work,” she said.

Cathy O’Hara, owner of O’Hara and Friends Salon at 7008 W. 127th St., in Palos Heights, was among those who offered space.

“I got to know (Molony) when I interviewed her for one of the podcasts we were doing during the pandemic, when we were shut down,” O’Hara explained.

She said she reached out immediately after passing by the accident scene Saturday night.

“It was a terrible thing to happen to them,” she said. “I will help if I can.”

Two salon assistants have already started a GoFundMe page, seeking donations for “Rebuilding Scissor Hands,” which they called their “home away from home.” The page can be found by searching on gofundme.com. The effort had raised more than $1,500 toward a $30,000 goal as of Tuesday night.

“It was very thoughtful of them to do that,” said Molony, explaining that the money raised will help the staff who lost their personal equipment in the fire.