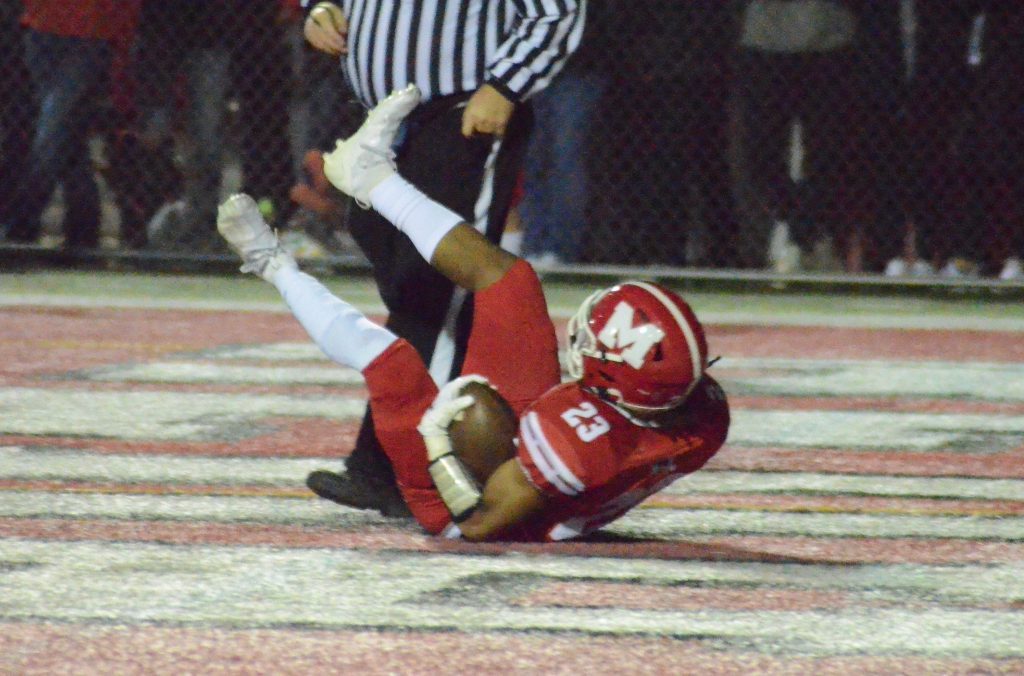 Marist receiver Patrick Johnson and all of the players in the CCL/ESSC Blue will have rough and tumble games this season. Photo by Jeff Vorva

It’s that time of year.

The IHSA has released the 2022 football schedule.

So, from now until Aug. 26, one can go on the IHSA website, look at the schedules and see all of the blanks where the results and scores will be. It’s a clean sheet for all, and the time for dirtying up and filling in those blanks will be here before we know it.

Here are a few observations after scanning the area schedules:

Standing out like a sportswriter in a GQ magazine is the stew in the Blue.

Any game in the four-team powerhouse Chicago Catholic League/East Suburban Catholic Conference Blue is must-see. There are only six contests and they are all gems.

Marist is at Mount Carmel to kick off the conference season on Friday, Sept. 16. Brother Rice is at Loyola at 1:30 p.m. Saturday, Sept. 17.

The Crusaders host the RedHawks in the neighborhood grudge match at 7 p.m. Oct. 21 while Mount Carmel visits Loyola at 1 p.m. on Oct. 22 to close out the regular season.

People can argue all they want whether this is the best conference in the state, but there doesn’t seem to be a dud in the schedule. 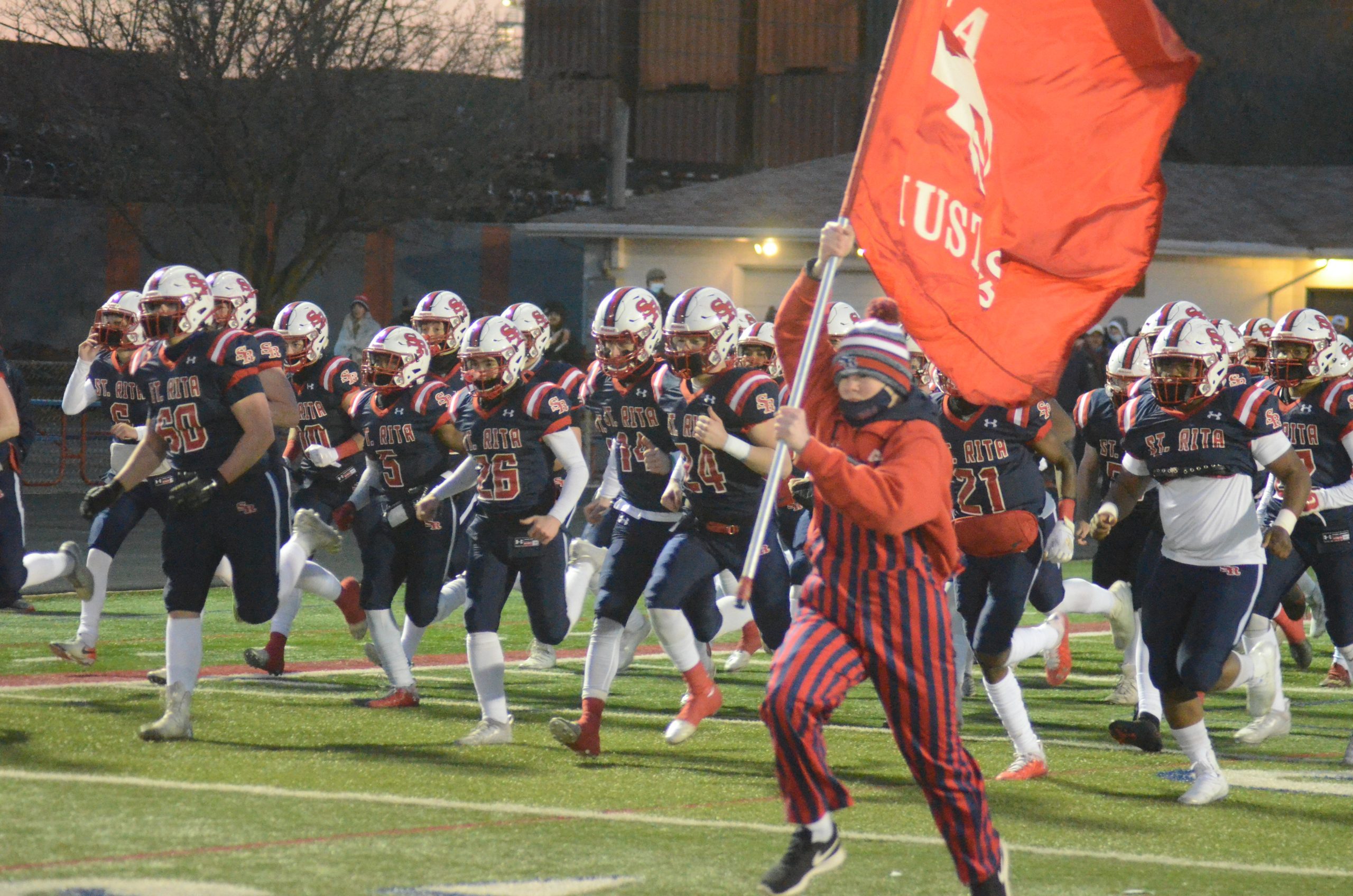 St. Rita, which finished second in Class 7A in 2021, hopes for success in the CCL/ESCC Green in 2022. Photo by Jeff Vorva

Not easy being in Green

The CCL/ESCC Green may be a tick below the Blue but it is not too shabby, with Class 7A runner-up St. Rita along with Nazareth, Benet and Notre Dame hashing things out.

Nazareth’s non-conference schedule gets off to a rocking start as the Roadrunners host Class 5A runnerup Kankakee at 7 p.m. Aug. 26.

For the most part, St. Rita will stay within the CCL/ESCC for its non-conference opponents as it faces the Blue’s Mt. Carmel, Brother Rice and Loyola, Orange member Providence and Purple resident St. Patrick.

The Mustangs also face Marian Central Catholic, which is an independent that was in the CCL/ESCC in recent years.

Chicago’s Christian’s second-week trip to Ottawa for a game against Marquette will not be the Knights’ longest jaunt of the season.

The eighth week of the season, on Oct. 15, the Knights have a long trip to Indianapolis to take on Phalen Leadership Academy.

For those unfamiliar with PLA — and that is most of us — the Falcons were 1-5 last year in games reported to MaxPreps, including an Oct. 16 forfeit to Mount Carmel because the team had several players missing due to COVID-19.

The team’s lone win was a 50-14 rout of Christel House at Manual (Indianapolis).

Too much information on Indiana football? Agreed. Let’s move on. 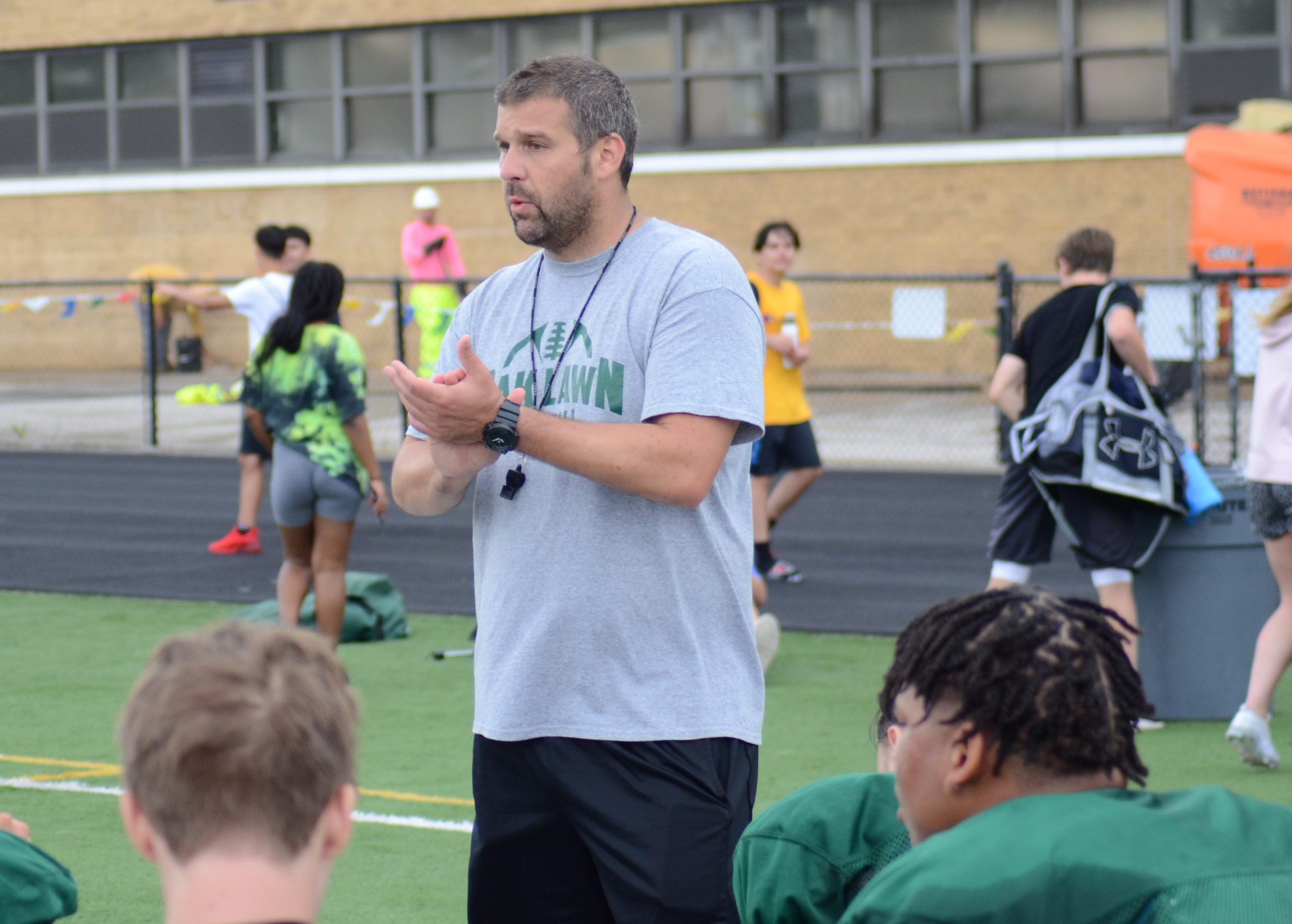 Coach Ryan Pattison needs to find an extra win in this year’s schedule for a chance to qualify for the playoffs. Photo by Jeff Vorva

An extra win in this schedule?

This year’s three non-conference battles for the Spartans are against Tinley Park (1-8 last year), Stagg (0-9) and Bremen (5-5), so a good showing against that trio and a winning record in the South Suburban Blue could put the Spartans in the playoffs for the first time since 2010.

Troy McAllister is in his second year at the helm of Sandburg. In his first year, the Eagles had one of the most amazing turnarounds from one week to the next, which was followed by a run to the Class 8A playoffs.

Sandburg hit rock bottom in the sixth week of the season with a 42-0 home loss to eventual Class 8A state champ Lockport, falling to 2-4. Its chance to qualify for its first postseason appearance since 2015 was toilet paper thin.

Then the Eagles did the seemingly impossible the following week. They knocked off Lincoln-Way East, 30-27, in Frankfort. It was their first win over the Griffins since 2007.

That sparked a season-ending streak that featured wins over Stagg, Homewood-Flossmoor and Lincoln-Way Central to help the Eagles make the playoffs.

Morton went 3-6 last season, the most wins for the Mustangs since winning four in 2010.

The Mustangs have never qualified for the playoffs. If they can pick up a couple of more victories this season, they can make history.

The bad news is they have Riverside-Brookfield, York and Oak Park on the schedule for non-conference games. They lost to those three schools by a combined score of 118-28 last year. Can they turn it around this year?

In high school football, anything is possible.

Stagg looks for a win

Stagg finished 0-9 last year and the Chargers’ closest setback was a 24-19 home loss to Lincoln-Way Central. The rest of the losses were by 19 or more points. The Chargers last win was Aug. 30, 2019 when they pillaged Little Village, 35-16, in the season opener.

Because of some CCL/ESCC defections, the conference’s Red division has just two teams: DePaul and Leo.

Thus, the Sept. 16 tangle between the two teams at Leo will determine the conference championship. 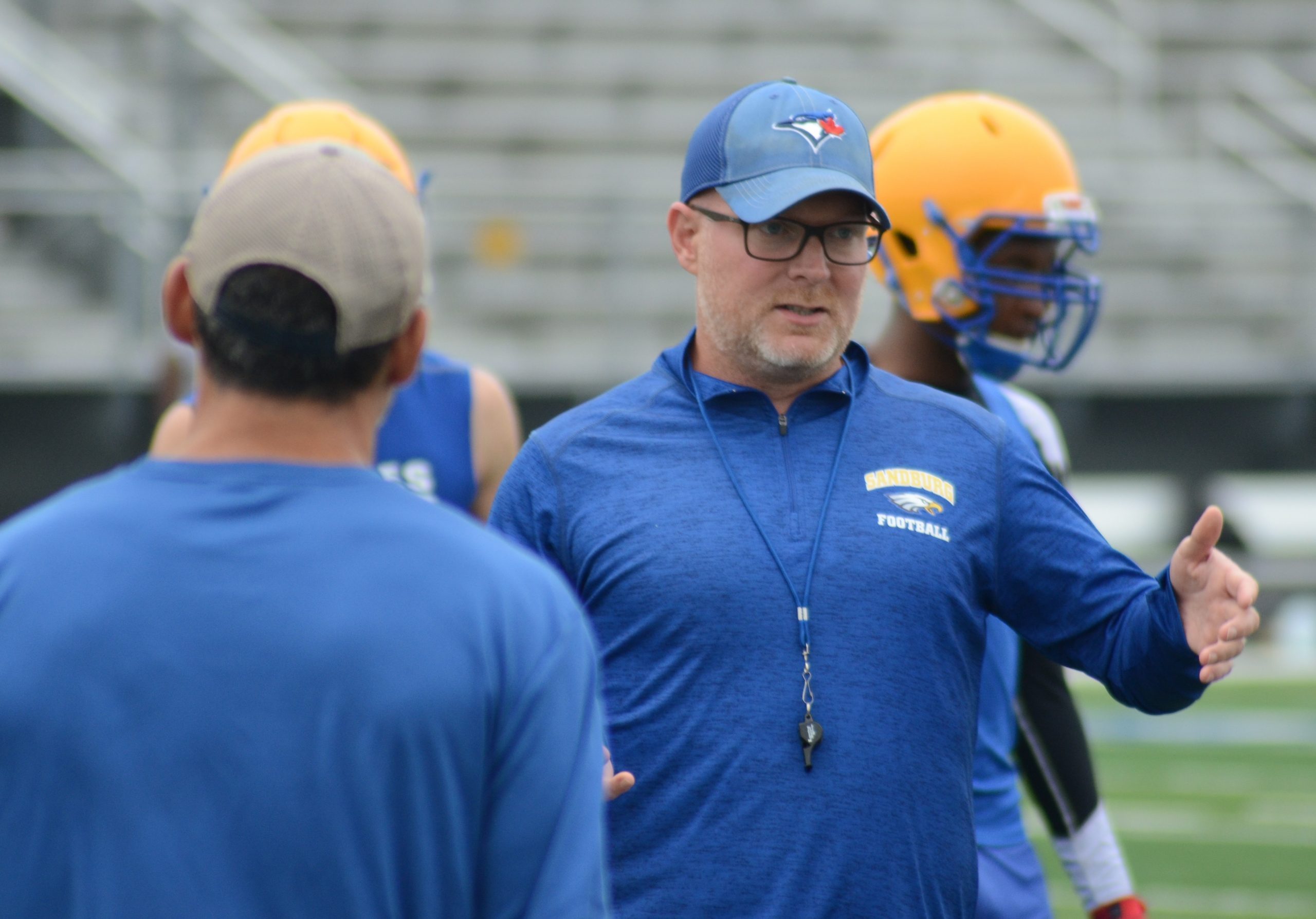 Troy McAllister and Sandburg’s football team will have interesting challenges when they face Lockport and Lincoln-Way East in back-to-back games. Photo by Jeff Vorva