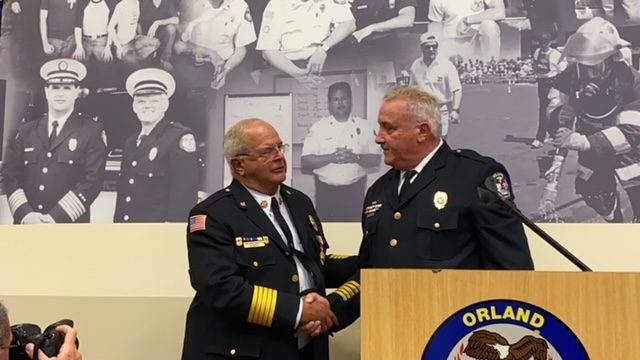 The Orland Fire Protection District, ranked as having one of the highest “save rates” in the nation, dedicated the Robert M. Buhs Education & Leadership Development Center on July 15 in honor of a former fire chief who officials said was the district’s chief architect.

Orland Fire Chief Michael Schofield said the Fire District Board of Trustees, including President Chris Evoy and Trustees John Brudnak, James Hickey, Jayne Schirmacher and Craig Schmidt, created the rank of Fire Chief Emeritus in recognition of the contributions Buhs made during his 27 years of service.

In ceremony filled with emotion, Buhs was presented with the newly created rank to reflect his role in building the Orland Fire Protection District. A naming plaque was unveiled at the Buhs Education & Leadership Development Center located at 10728 W. 163rd Place.

“Buhs is the first recipient of the rank of Chief Emeritus in the Orland Fire District,” Schofield said.

Buhs expressed his gratitude in receiving the honor, saying he is honored by “the dedication and continued spirit” of the Orland Fire Protection District’s service to the community.

“To the current young men and women who are now a member of this district, this family, let this building serve not as an educational and leadership development center, but as a reminder that it took a team, a team of dedicated people who supported me, who stood next to me, and who built the district. Now, the challenge is you to move forward. Thank you.”

Former Frankfort Fire Chief and now Executive Director of the Illinois Fire Chiefs Association Jim Grady III, who opened the ceremony, emphasized that Buhs, “Has been surrounded by and centered by family first. Always family first.”

Today, the Orland Fire Protection District is recognized as having a 65 percent save rate for individuals who suffer heart attacks. The national save rate is only 10 to 15 percent. The OFPD is Certified with ISO-1 and as an Internationally Accredited Fire Department, one of only 100 in the United States and Canada.

Schofield read the dedication on the plaque that outlined Buhs’ service, which was placed at the new Buhs Education & Leadership Development Center. Buhs began as a fire volunteer and then rose to become fire chief in 1988.

Buhs also served as Executive Director of the Illinois Fire Chiefs Association from 1988 until 1999.