Skip to content
July 19, 2022/Comments Off on Veterans and families enjoy a banner day on Orland Park 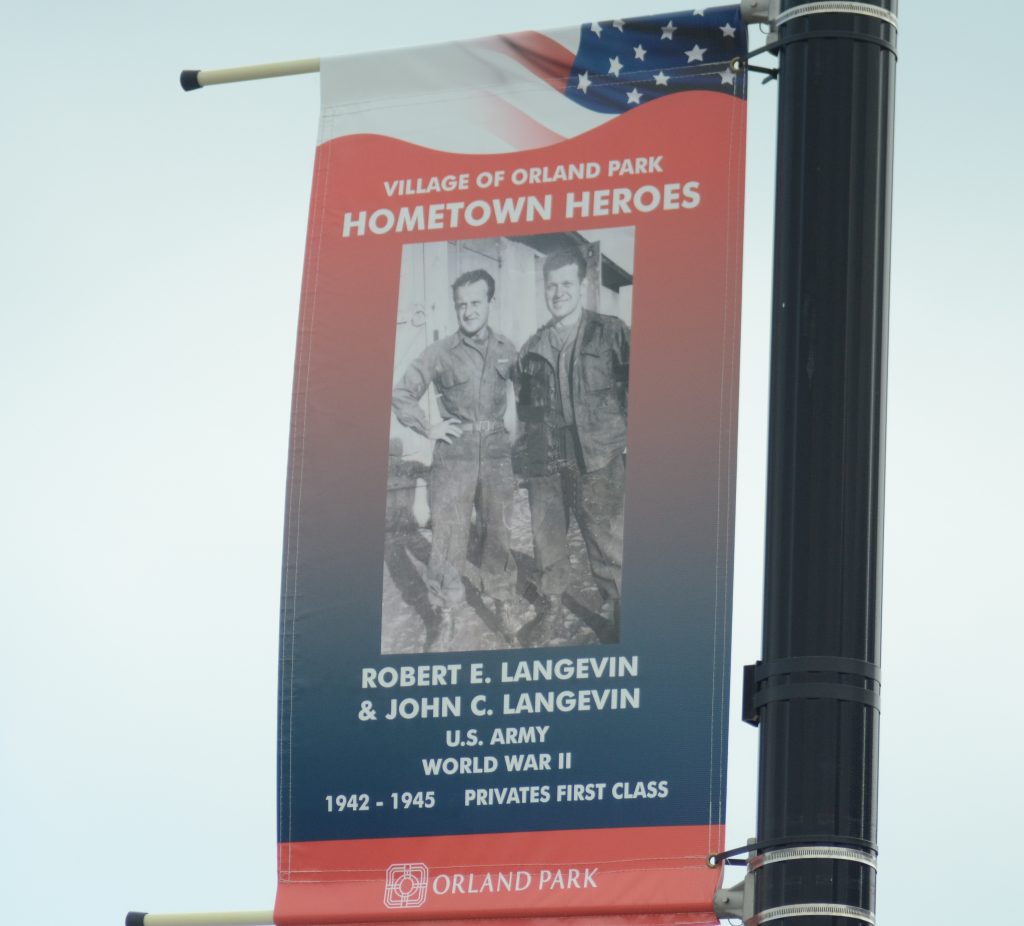 Brothers Robert (left) and John Langevin are honored by a banner in Orland Park. (Photos by Jeff Vorva)

Veterans and families enjoy a banner day on Orland Park

When former Stagg teacher Diane Gurnea looks up and sees the banner displayed on Ravinia Avenue and 143rd Street in Orland Park, she can’t help but to be proud.

Her father, John Langevin, and uncle, Robert Langevin, share a banner that was recently erected. The Village of Orland Park held its Hometown Heroes 2022 banner ceremony on Saturday. There was a banner dedication and walking tour as 35 banners with military heroes will be displayed for a year.

That includes the Langevin brothers, who served in World War II.

“This is the first time we have had two service members on the same banner,” Veterans Commission Chair Dale Carver said. “It might be the only time that happens.

Robert is two years older, and both served in several different countries while in the Army. Gurnea an Orland Park resident, said she loves the photo of the two on the banner because of its historical significance.

It was taken in front of a prisoners of war camp in Moosburg, Germany, where Robert was with a group trying to liberate that camp. 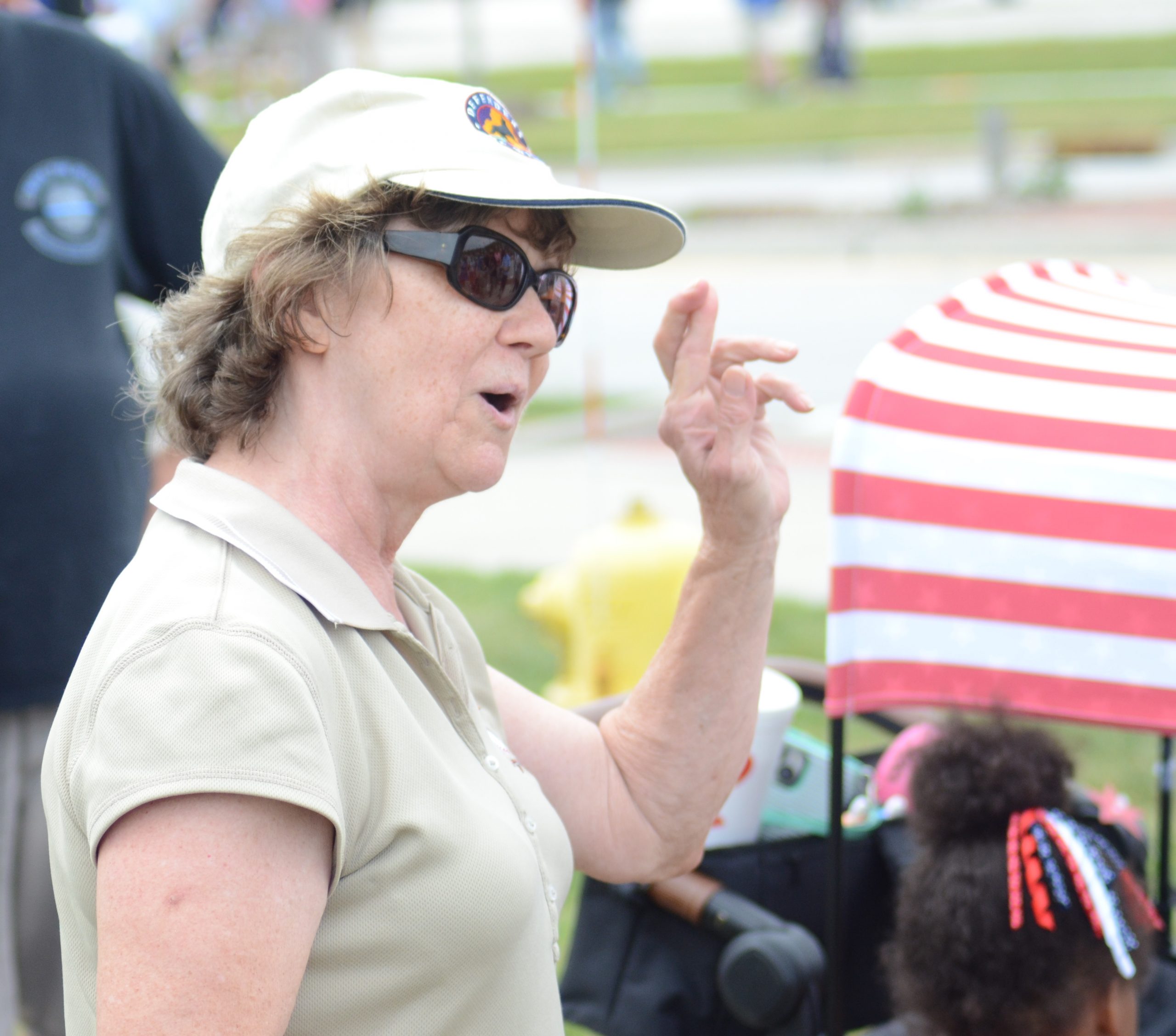 Orland Park’s Diane Gurnea talked about her father and brother during the banner ceremony on Saturday.

“My dad hadn’t seen his brother – my uncle – in four years,” she said. “He was stationed at the time in France, and he insisted to his higher ups that he wanted to find his brother. They told him ‘no’.”

But John pressed on.

“He went to the Catholic chaplain because he was a good Catholic boy,” she said. “And he was denied a pass. So, he goes to the Protestant chaplain and gets a pass.

“Two sergeants escorted him into Moosburg and that’s the surprise picture. I love that picture because that’s how it was back then. It was rough. It wasn’t pretty.”

Another banner went to William Nicholson, who grew up in the Back of the Yards neighborhood and attended St. Rita High School. He was living in Orland Park and died at age 97 in 2021.

According to a biography that was put together by his daughter, Jan Adamo, after he served in World War II in the Air Corps, Nicholson worked at the University of Chicago on the Manhattan Project, as an assistant in the Met Lab working with and machining uranium and other metals for the development of the atom bomb.

His wife, Loretta, is 97 and was married to William for 72 years and she said she appreciated the village honoring her late husband.

“This is a wonderful tribute,” she said. 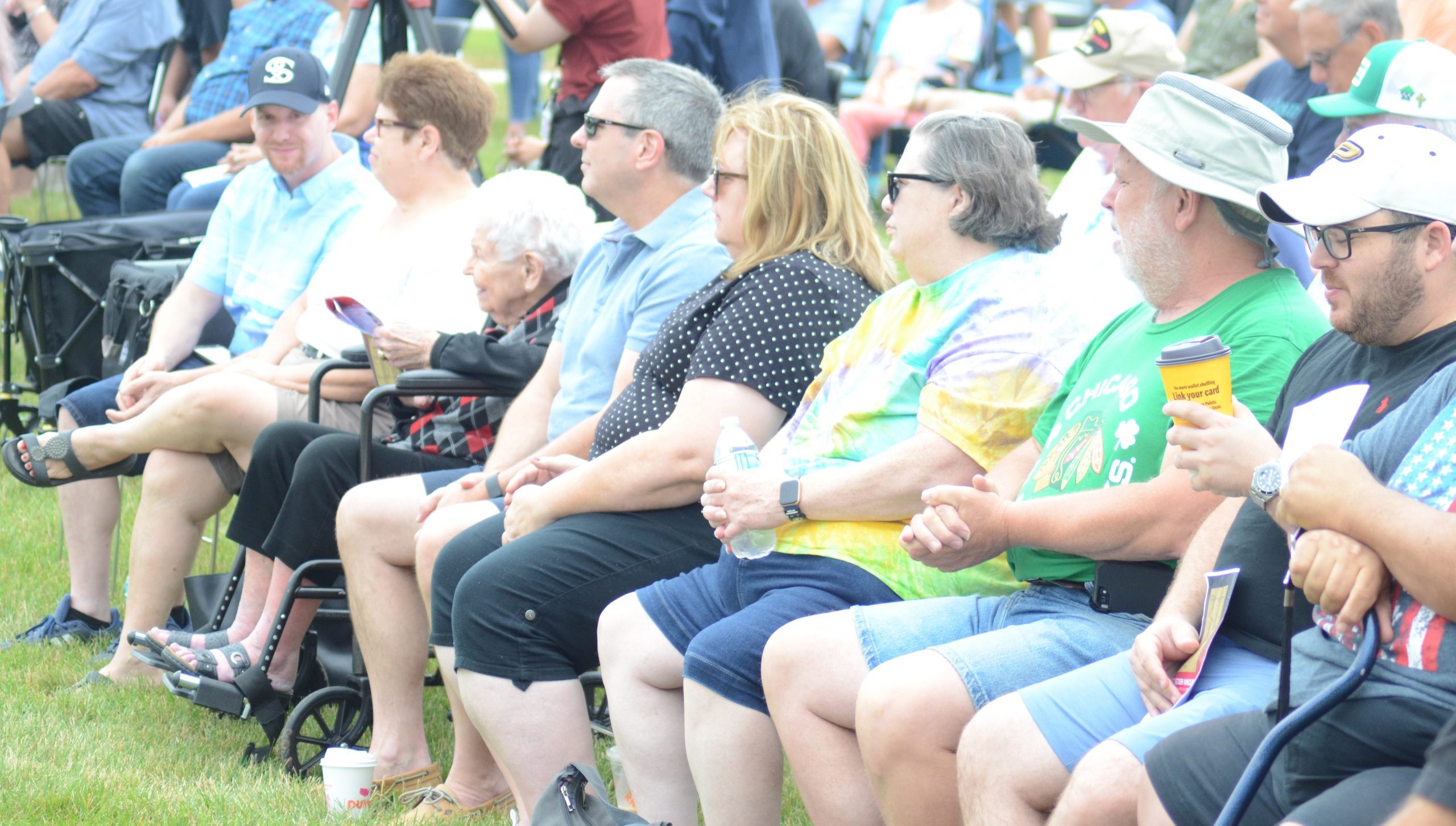 Carver gave credit to anyone who served no matter what capacity they served.

“They all went somewhere because they were willing to stop forward. And because they stepped forward, we are who we are.”

Kampas said there have been many sacrifices made by those who served.

“Veterans defend liberty 365 days a year,” he said. “Their service often means long separations from their families and missing important milestones in their children’s lives.

“They often deal with extreme environments, ranging from subzero frigid to baking in the desert. Some are confined to cramped spaces like the interior of a submarine while others stand post for long hours of boredom, or worse, of terror-filled moments with the high stress of combat.”