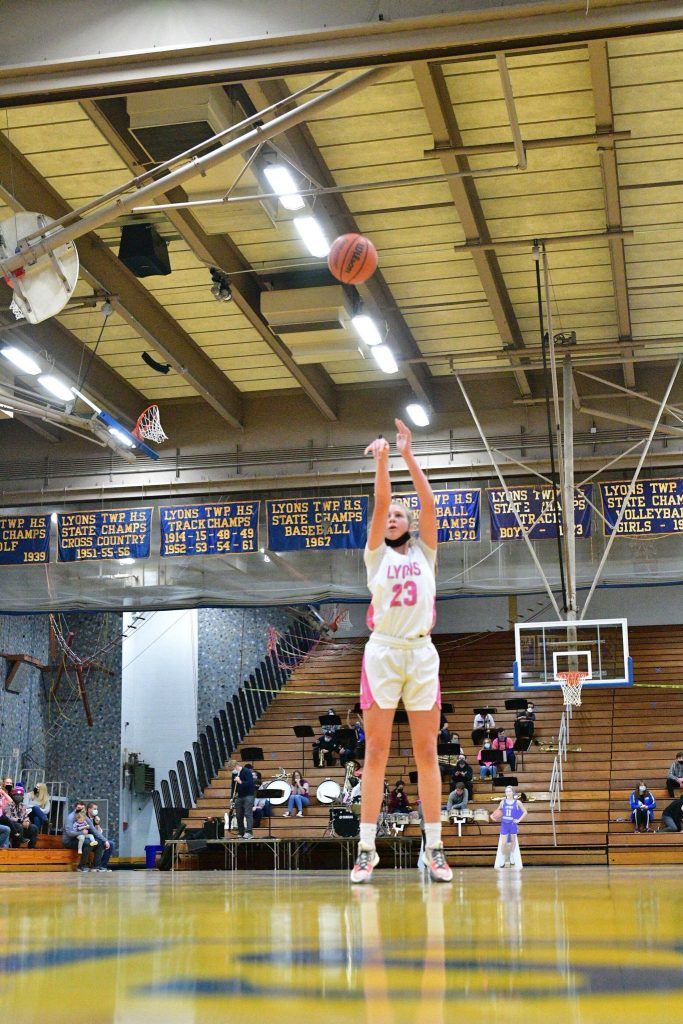 Lyons graduate Izzy lee will continue her athletics career at Illinois, where she will play soccer for the Fighting Illini. Supplied photo

Izzy Lee grew into her role as a two-sport standout at Lyons.

Now she’s taking that growth to college at Illinois, where she will play goalie for the women’s soccer team.

A couple years ago, Lee experienced a growth spurt. Being taller and stronger predictably supplemented her soccer and hoops skills.

“Everyone was shocked when I came back. I had knee pains for a little bit, but [the size] helped a lot. As a goalie in soccer I knew the footwork before, but now I had the extra length.

“In basketball I was a guard, but by senior season I had switched to being a post player.”

COVID canceled the spring soccer season in 2020, and Lee stepped into the starting goalie role as a junior in 2021. She earned Second Team All-State honors while helping the Lions (20-1) to a runner-up finish in the Class 3A State Finals. Her season included a 15-game shutout streak, and she allowed just four goals, finished with 17 shutouts and had 103 saves.

During her senior season she allowed five goals, made 72 saves, and had 14 clean sheets as the Lions registered a 20-2 record before falling to Glenbard West (15-7-1) in a shootout (2-1, including 4-3 in the shootout) in a sectional final match.

“It was tough,” Lee said of losing the sectional title game. “We beat them in the regular season (2-1 on May 10) so we were expecting to win. But a highlight of the season was when we beat Loyola (1-0 on April 13 in the Group C Final of the Lou Malnati’s Deep Dish Classic) and spending time with my teammates my senior year.”

“I watched her grow into an outstanding individual who excels in both academics and athletics,” Hutchens said. “As Isabella’s basketball coach, I witnessed her extraordinary drive, passion for excellence, and competitive edge in everything she does.”

Lee averaged 14 points and eight rebounds per game while shooting 55.5 percent from the field last season. She was named to the Third Team of the Illinois Basketball Coaches Association All-State team and also to the West Suburban All-Conference squad. She helped the Lions to a 28-4 record, their best mark since going 30-5 in 1999, before losing to Whitney Young in the sectional final.

“She is a relentless competitor with endless energy, which impacts all facets of the game,” Hutchens said. “Isabella’s intensity and commitment to winning lift the best out of her teammates, everyone plays harder when she is on the floor. Her work ethic allowed her to lead the team in two main statistical categories, points and rebounds.

Lee has been playing soccer and basketball since she was 7 or 8 years old. She doesn’t prefer one over the other, she says. But when Illinois offered her an opportunity to play goalie, the choice was easy.

“It’s great to be here,” said Lee, who was in Champaign for the first official team meeting the second weekend of July. “I’ve always had Illinois at the top of my list, so once I got an offer it was a no-brainer. Both my mom and dad (Jason) went here, and three of my cousins are here now, too.”

Did she consider doing both basketball and soccer there?

“I was thinking about it,” Lee said. “But since I’m majoring in engineering a lot of my time will be taken up with school. It’s a great school both academically and athletically, and I’m super excited for the next four years.”