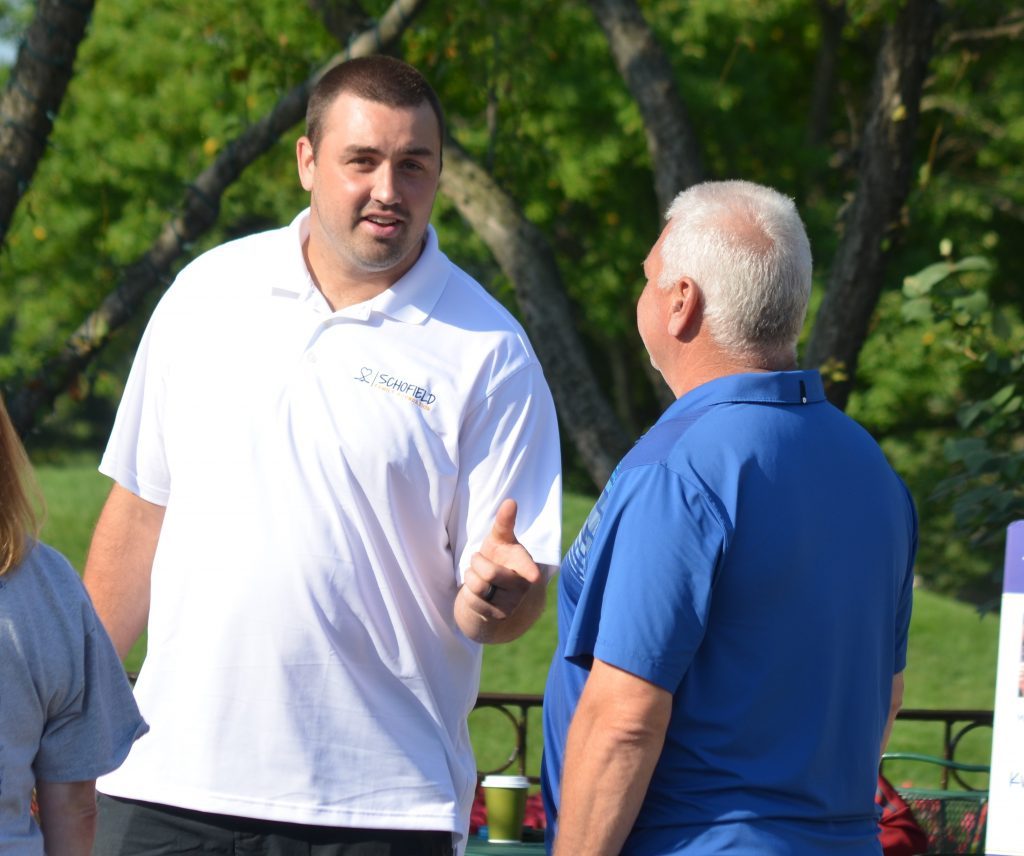 Michael Schofield, shown at a Schofield Family Foundation golf event, was signed by the Chicago Bears on Monday. Photo by Jeff Vorva

Last September, Michael Schofield was looking for work after being cut during training camp by the Baltimore Ravens.

His people contacted the Chicago Bears.

It sounded like a pretty good idea for both parties.

He had experience — and a Super Bowl ring — as an NFL offensive linemen and the Bears appeared to need some help in that area, as they had Andy Dalton and rookie Justin Fields to protect at the quarterback position.

According to a source, the Bears weren’t interested and told him they were set on the line.

Well, it’s 2022 and the phrase “what a difference a year makes” can be dusted off and used again. The Bears have a new coaching staff and general manager, and Schofield was looking for work again.

What stayed the same is that the Bears still need help on the line.

Schofield hopes to provide that help.

On Monday, the Orland Park native and Sandburg graduate was signed by the Bears to a one-year deal. He was scheduled to join the team Tuesday as it opened training camp. Chicago gave him a workout July 24 in Lake Forest and liked what it saw.

The 6-foot-6, 300-pound Schofield will be battling Sam Mustipher for the starting right guard job. The Bears also drafted four linemen and one of them might be in the derby for that spot as well.

Schofield, 31, played in 102 regular-season games with 81 starts and 5,533 snap counts with Denver (winning a Super Bowl as a starter for the 2015 Broncos), the Chargers and Carolina. He’s been penalized 17 times and allowed 22.5 sacks during his career.

Should Schofield make the Bears out of training camp, that will increase his profile in the Chicago area. He and his wife, Team USA hockey hero Kendall Coyne Schofield, are already active in the community. The couple founded the Schofield Family Foundation, which in recent years has raised money for first responders, families, youth sports and education/research. Kendall has hosted youth hockey camps and Michael has run linemen camps in the summer.

After COVID-19 made a mess of the 2020 high school football season in Illinois, Michael was available as a volunteer assistant coach for Sandburg during the abbreviated 2021 spring season.

Both are also part owners of the Chicago Red Stars of the NWSL.

Schofield got his start in football with the Orland Park Pioneers youth football program because his younger brother, Andrew, wanted to play. Michael said he was more of a baseball player at the time. He played wide receiver and linebacker for the Pioneers, but converted to a two-way lineman at Sandburg. He blossomed into an elite lineman at Michigan and was drafted in the third round by Broncos in 2014.

He did not play a down for the Broncos that year. But when head coach John Fox left and later coached the Bears and Gary Kubiak took over in Denver, Schofield quickly worked his way into the starting lineup and helped the Broncos win the Super Bowl. It was the last time Denver made the playoffs.