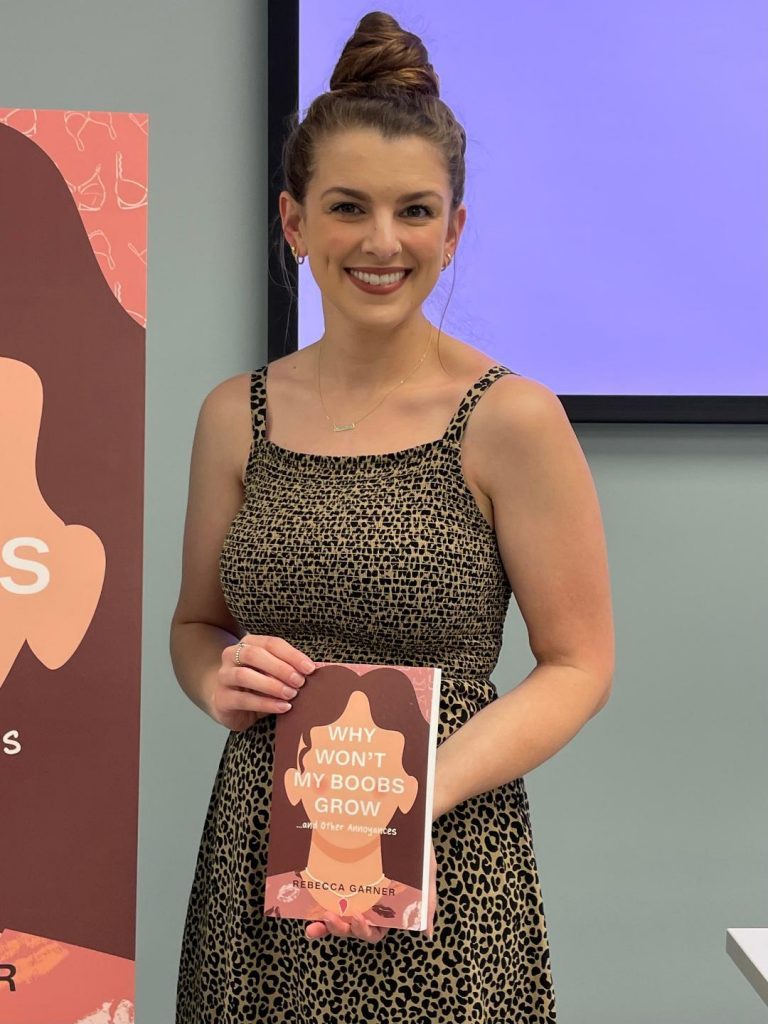 Rebecca Garner presents her book, “Why Won't My Boobs Grow... and Other Annoyances,” at the Chicago Ridge Public Library, 10400 S. Oxford. (Photos by Kelly White)

Growing up in the Chicago Ridge, Rebecca Garner, found lots of inspiration in her hometown. She used that inspiration to help write novel, “Why Won’t My Boobs Grow… and Other Annoyances.”

“I think that for adults, this book is a fun trip down memory lane,” Garner, 33, now of Oak Lawn, said. “For teenagers, I think it’s an opportunity to see themselves on the page. Emma (the main character) is your average teenager, no special powers, no wild adventures, just the ups and downs of everyday life. I hope it helps them feel less alone, and reminds them that even if there are moments it feels like your life is over, everything is going to turn out OK.”

Garner, who attended Our Lady of the Ridge School and Richards High School, presented her book at the Chicago Ridge Public Library, 10400 S. Oxford, Chicago Ridge, on Monday, June 20. 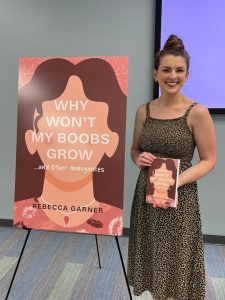 “Rebecca and I actually went to the same grammar and high school,” Lori Lysik-Forney, Adult Programming Coordinator at the Chicago Ridge Public Library, said. “I saw that she was coming out with a new book and I thought that a perfect place for her to promote her new book would be her childhood library. By local libraries creating a space for local authors to feature their books, it gives them the opportunity to put their name out there and attract potential readers.”

“Why Won’t My Boobs Grow… and Other Annoyances” was published on May 31, 2022 through New Degree Press, a hybrid publishing company.

It is about a 14-year-old girl named Emma, who’s just trying to make it through eighth grade. She’s dealing with zits, boys, friends, and, of course, wondering if her boobs are going to grow. It’s a funny and realistic look at trying to navigate being a teenager and figure out who she is.

“The best way I can describe this book is a blast from the past,” Lysik-Forney said. “This really brought me back to eighth-grade and had me reliving feelings that I completely forgot about as an adult. In the end I felt like this is a story for the girls who had a hard time in grade school but can say that “hey I made it alive and everything’s going to be OK.”

The book, Garner said, was inspired by none other than her teenage self.

“I would have loved to have found this book on the shelf when I was a teenager,” Garner said. “I wrote this book because I wanted teenage girls to not only see themselves in Emma but to also feel seen and heard and understood.”

Not only with school though, there are other settings throughout the book from around the Chicago Ridge area that Garner used in her book.

“Emma and her best friend Ruby often walk to school, which is the same route my best friend and I took walking down 110th street to Oxford (in Chicago Ridge),” Garner said. “There’s also a pretty major scene that takes place at a park, which I envisioned as the park on Oak Avenue — We always called it Oak Park, but I don’t think that’s the official name.”

Garner went on to attend DePaul University where she earned a Bachelor’s Degree in Elementary Education with middle school endorsements in both English Language Arts and Social Sciences. From there, she earned her Master’s Degree in Curriculum & Instruction with the ESL Endorsement through American College of Education.

Even with her extensive background, Garner said Chicago Ridge will always be home.

“I think one of the highlights of every year growing up in Chicago Ridge was going to Ridge Fest over the summer,” she said. “Everyone would be there, and we would run around all day going on rides, eating funnel cakes, and of course, talking to boys. On a more regular basis though, I have a lot of memories of just walking around the neighborhood with my friends and hanging out at the parks.”

When Garner was teaching middle school, people would gasp and say, ‘Ugh, why? Teenagers are horrible?’. This left her wanting to dig more into teenage mind.

“Yeah, they can be horrible, but I also love teenagers because they are so full of emotion and passion, on the cusp of not being a kid anymore, trying to figure out who they are and where they fit in the world,” Garner said. “I loved getting back into the head of a teenager and letting my thoughts and emotions run wild. I’d put on some 90s or 2000s throwback music and try to transport myself back to that time. How was I feeling? What was important to me? How would I react? It was really fun.”

Garner’s book is available on Amazon, Barnes & Noble, Bookshop.org and copies are also available at the Chicago Ridge Public Library.