Alyssa Mautz (center) is joined by her teammate for a ceremony Saturday at Soldier Field before the Red Stars' loss to San Diego. Mautz retired and will be an assistant women's soccer coach at Texas A&M. Photo by Jeff Vorva

The postgame attention – and surely a lot more attention to come – went to 17-year-old Jaedyn Shaw.

Mautz announced that last Saturday’s game against the San Diego Wave would be her final last for the Chicago Red Stars. She has accepted an assistant coach’s position on the Texas A&M women’s soccer staff.

The Red Stars held a ceremony for Mautz before their Soldier Field showdown with the Wave.

In a match that featured some of the world’s best soccer players, it was Shaw — signed by the Wave on July 18 — who in her first NWSL game and scored the game’s only goal in the 1-0 victory over the Red Stars in front of an announced crowd of 23,951. The match was the nightcap of a doubleheader after the Chicago Fire drew 0-0 against Atlanta.

“I saw her play when she was 10-years-old,” Red Stars coach Chris Petrucelli said of Shaw. “She was like this then. She was scoring goals and playing against 12- and 13-year-old players. She was dangerous.

“I wasn’t surprised by it by any means. She’s a great talent. I’m sure she’s going to do great things.” 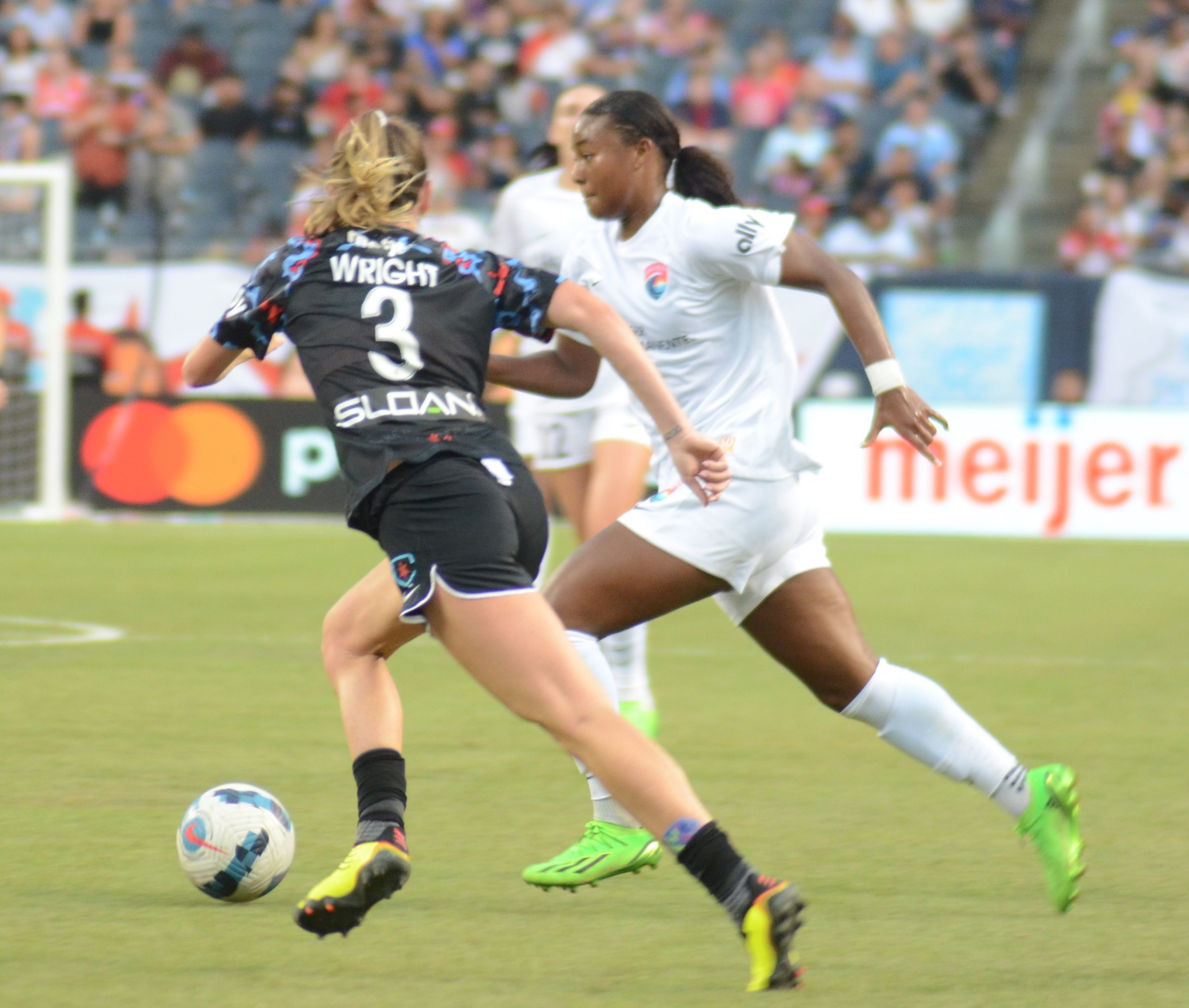 Mautz joined the Red Stars in 2012 during the club’s time in the Women’s Premier Soccer League Elite. In 2013, when the NWSL was formed, the midfielder was allocated to the Red Stars via the NWSL Supplemental Draft and proceeded to play in 18 matches, starting in eight, and scoring four goals. Since then, the St. Louis native has been a reliable presence for the club.

“It was a pretty fast decision,” Mautz said. “It came out of the blue. I wasn’t searching for anything. It was the right time, I guess. I never thought I would retire in the middle of the season. That killed me a little bit, but nothing is ever perfect.

“I definitely made the right decision, but I hate to leave my teammates. They will keep working hard and keep fighting and showing that grit out there.”

Another veteran on the Red Stars, Vanessa DiBernardo, had a hard time composing herself when she talked about Mautz’s retirement.

“She’s come back from two ACL [surgeries] and her mother passing away,” DiBernardo said. “And she still comes here and shows up. And she’s a great person outside of soccer.”

“She’s a complete pro,” Petrucelli added. “She plays with passion and intensity. I said before the game we weren’t playing for Mautz; we wanted to play like Mautz.”

Mautz will end her career as one of six players who have been rostered with the same NWSL team for all 10 seasons and one of the few players to play 100 regular-season matches with the same club.

She is among the all-time league leaders in goals with 16 in 143 regular-season matches. In 2013, Mautz scored a goal in 40 seconds against Western New York Flash, one of the fastest goals scored in league history.

“Mautz is the definition of Chicago Red Stars soccer,” said Michelle Lomnicki, the Red Stars’ associate general manager and a former teammate of Mautz. “The culture and mindset she helped create at this club is one of the reasons for its continued success. There are not enough words to describe what she means to this club and to me personally.”

The Red Stars fell to 5-3-5 and have lost two in a row. San Diego moved back into first place with a 7-3-4 mark. The Wave was a player down for 32 minutes after Abby Dahlkemper picked up her second yellow card, but the Red Stars could not score. Chicago outshot San Diego 20-9.

The Red Stars return to SeatGeek Stadium on Sunday for a 5 p.m. battle with Gotham. The Red Stars beat Gotham on the road, 3-0, on July 2. Ella Stevens, DiBernardo and Sarah Luebbert each had goals for Chicago. 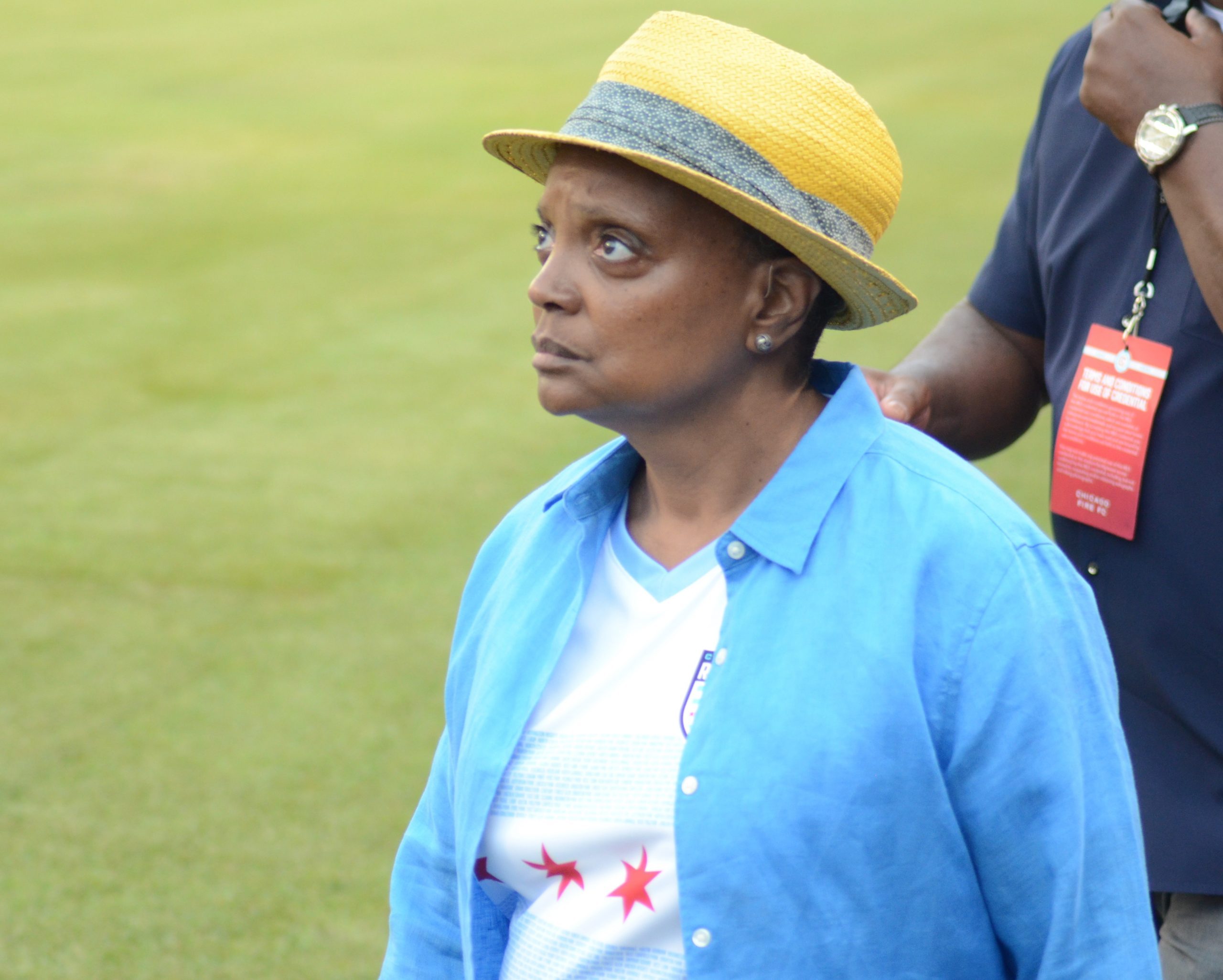 Chicago Mayor Lori Lightfoot checks out the crowd after she participated in the coin flip before the Red Stars game with San Diego Saturday at Soldier field. Photo by Jeff Vorva

Help in the net

The Red Stars signed goalkeeper Kelsey Dossey to a replacement goalkeeper contract on Saturday. Dossey will fill in for Emily Boyd, who sustained an injury last week.

Dossey, from Plainfield, Indiana, played college soccer at Missouri, where she ended her career as one of the most decorated goalkeepers in Tigers’ history. Dossey had 203 saves at Mizzou, 11 career shutouts and 24 victories — both good for fourth in program history.

The red-hot Chicago Fire opened the doubleheader with a scoreless draw against Atlanta to halt its winning streak at three games, but kept alive its unbeaten streak at four.

The Fire (7-10-6) tied a Major League Soccer record for most home shutouts in a 15-game span as they racked up 11 clean sheets.

The home fans celebrated what looked like a second-half goal from Xherdan Shaqiri, but he was ruled offside after the officials reviewed the play and the goal was taken off the board.

Third game at the Geek?

The Fire has two games scheduled for SeatGeek Stadium this season because of Soldier Field conflicts with the Bears. There are rumblings there could be a third if the Fire decides for a change in venue for its Aug. 21 game against New York.

The Red Hot Chili Peppers are playing a concert at Soldier Field on Aug. 19 and Bad Bunny will play there on Aug. 20. Fire officials are concerned about what shape the field will be in on the 21st.

The Fire II tied Rochester 1-1 Saturday on the road and earned a second point with a 5-4 penalty kick shootout in an MLS NEXT Pro game. 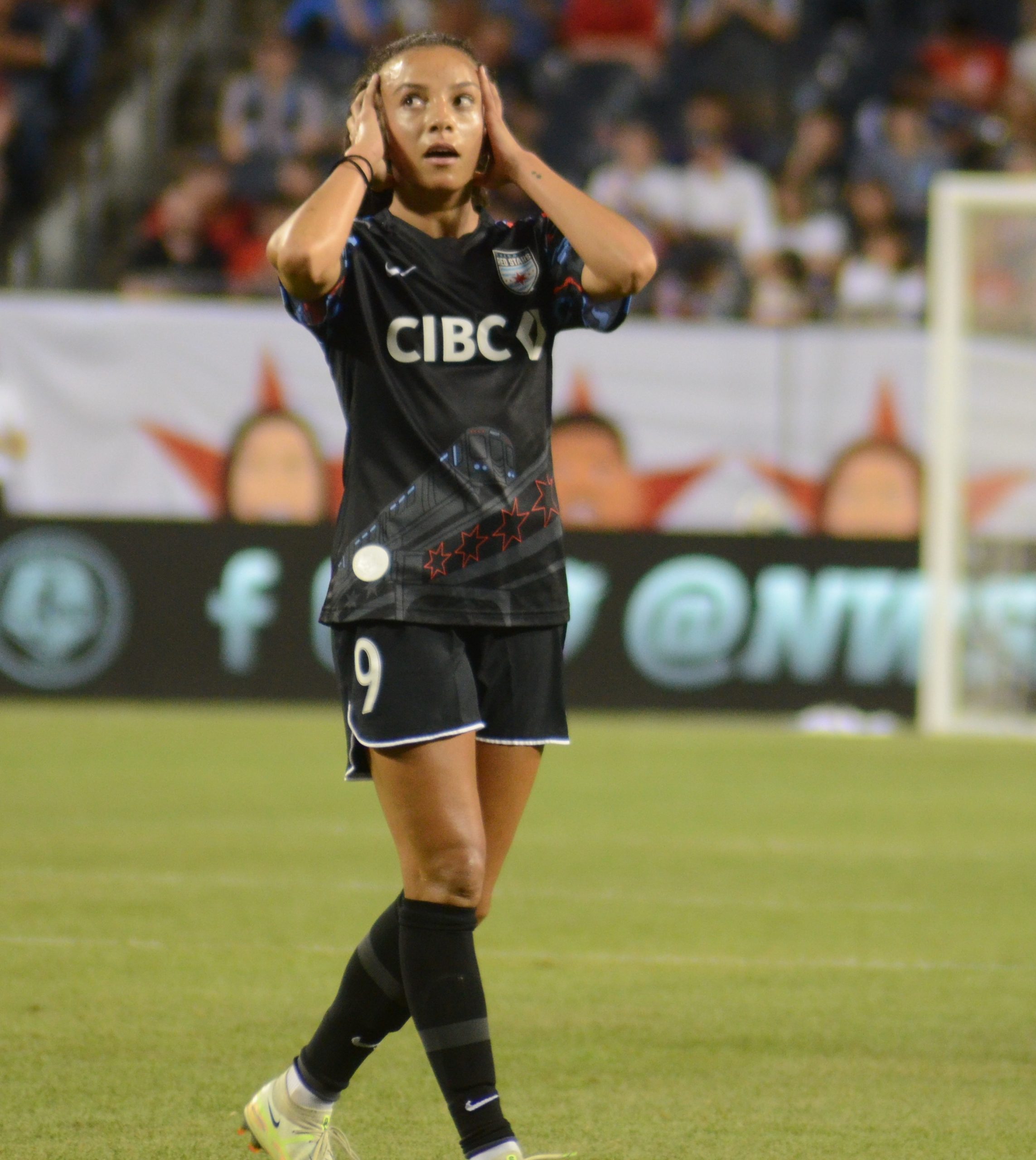 Red Stars standout Mallory Pugh shows frustration after being fouled on a breakaway in a 1-0 loss to San Diego Saturday at Soldier Field. Photo by Jeff Vorva