Skip to content
August 5, 2022/Comments Off on Orland getting ready to welcome Pete’s Fresh Market next year

An artist's depiction of what Pete's Fresh Market in Orland Park would look like.

Orland Park’s Board of Trustees made some decisions for Pete’s sake.

During Monday night’s board meeting, the trustees passed modifications of building codes as well as approving special use permits to build a Pete’s Fresh Market at 15080 S. LaGrange Road, a spot that housed the Art Van Furniture Store.

This project has been in the works since 2020 and mid- to late-2023 could see the opening date come to fruition. 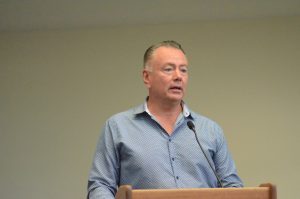 Pete’s Fresh Market representative Eugene Grzynkowicz gives an update to the Orland Park Board of Trustees on Monday. (Photo by Jeff Vorva)

Eugene Grzynkowicz, representing Pete’s, said the market is anxious to open because there have been delays in the project due to economy and equipment.

“With the approvals today, we will be starting our mass demolition quickly,” he said. “We will start that in mid- to late-September. The grand opening, though? It depends on the materials coming in and transformers from Commonwealth Edison. We anticipate the grand opening sometime in late summer or fall of 2023.”

“We’re excited to have you here,” Pekau said. “I wish it would have been a little bit sooner but with what is going on, there is nothing anyone can do about it. We look forward to seeing you coming to Orland Park.”

According to the market’s website, the Orland store is scheduled to be the 18th to open in the Chicago area. There are seven in Chicago, plus stores in Bridgeview, Evergreen Park, Calumet City, Oakbrook Terrace, Oak Park Willowbrook, Wheaton, Glen Ellyn, Lemont and Matteson.

There are future locations planned in Oak Lawn, Tinley Park, New Lenox and a second store in Oak Park.

Trustee Cynthia Nelson Katsenes said she was happy to have a role in bringing Pete’s to town.

“One of the cool things about being on this board is you come up with ideas sometimes,” she said. “I had an idea that I ran by [Village Manager George Koczwara] about Pete’s Market. Pete’s Market is a wonderful store and I frequent the one in Lemont when I don’t shop in Orland.

“George set the wheels in motion and got Pete’s to come here.”

Orland Park’s Summer Concert Series will take 2023 off due to future construction at Centennial Park West.

Pekau said free concerts will be held at Centennial Park West’s parking lot instead and the concert series will resume in 2024. One of the big improvements to the park will be a permanent stage.

There are two concerts left on the 2022 schedule – tribute bands for Elton John, Pearl Jam and U2 on Aug. 20 and alternative rockers Hinder, the Spin Doctors and Dishwalla on Sept. 3.