Skip to content
August 6, 2022/Comments Off on Charge man with murder in birthday party shooting

Guest of honor shot in the head

A 28-year-old man has been charged with murder and aggravated battery in connection with a double shooting at a backyard party in Back of the Yards.

Jorge Espana, who police said lives in the 3500 block of West 73rd Street, allegedly shot and killed 37-year-old Huberto Rosales in a home in the 5400 block of South Winchester at about 3:30 a.m. Sunday, July 24. Espana’s 25-year-old girlfriend and their child live in the attic of the home. 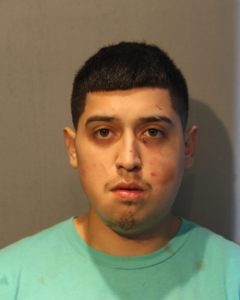 At the time of the slaying, a group of people was at the home to celebrate Rosales’ birthday. Rosales was pronounced dead at the scene at 3:42 a.m.

According to published reports, Espana became entangled in an argument at the backyard party with his girlfriend’s brother. As the chest-to-chest dispute escalated into fisticuffs, Espana allegedly claimed he was going up to the attic to get a gun.

In the attic, his girlfriend—who had fallen asleep–woke up and tried to stop him by locking a door. When Espana heard a noise on the other side of the door, he allegedly raised a gun and fired a shot. The bullet grazed his girlfriend’s armpit, went through the door and hit Rosales (the girl’s stepfather) in the head.

Espana then reportedly fled the scene with his sister. He was arrested later that day, at 8:54 p.m. at 6705 S. Pulaski.

Bond was denied by Judge Charles Beach, and Espana’s next court date is Aug. 15.

At his bond hearing, Espana’s attorney said the shootings were accidental and reportedly described his client as a churchgoer, “animal lover” and “helpful” member of the community, according to a published report.

According to public records, Espana has been arrested five times by CPD since 2015, mostly on cannabis-related charges.