Orland Park native Tatumn Milazzo is all smiles during the Red Stars' 2-0 victory over Gotham. She scored a goal and anchored the defense in a shutout. Photo by Jeff Vorva

At one time in early July, the Chicago Red Stars were tied with San Diego for the most points in the NWSL.

For most of the month they hung around second place, but after ending July with a two-game losing streak, they entered Sunday’s home game against Gotham FC in fifth place.

Thanks in part to a goal from Orland Park native Tatumn Milazzo and another from rookie Ava Cook, the Red Stars got a great jump on August with a 2-0 victory in front of an announced crowd of 5,078 Sunday at SeatGeek Stadium in Bridgeview.

The header in extra time in the first half was Milazzo’s second career NWSL goal and first at SeatGeek Stadium, where she usually has a team full of fans in the stands.

“I got to see them on the sidelines [minutes after the game] and they were screaming and yelling, and that was really fun,” she said. “My mom and sisters and grandparents were here, and my high school principal and one of my middle school teachers were here. They were excited.” 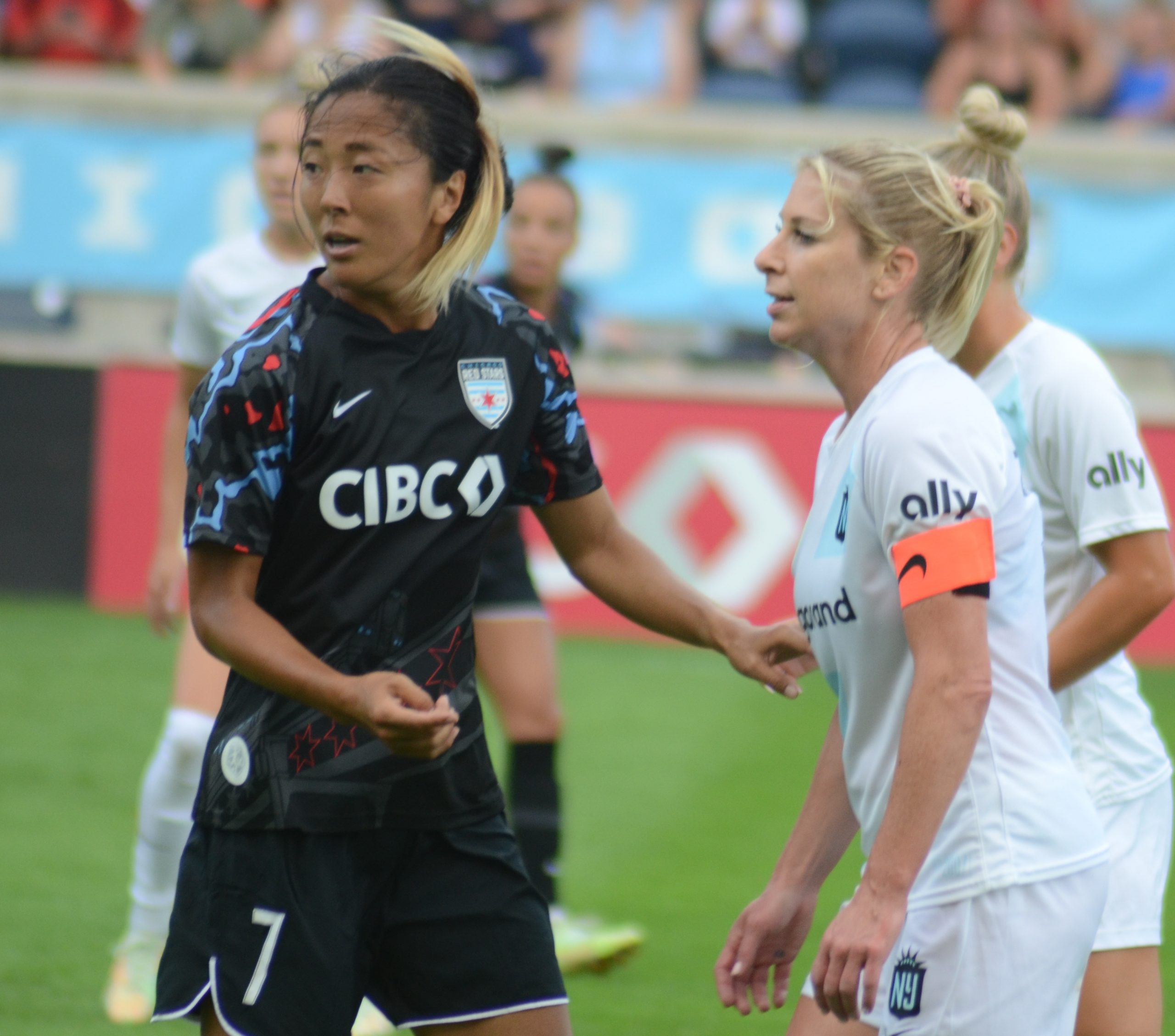 Watch what you say

Gotham’s McCall Zerboni came under fire for what, to some, was an innocent comment, but angered others.

After a match against Houston on July 31, Zerboni talked about players blending in by saying “You’ve got to have enough Indians, there can’t be too many chiefs.”

That didn’t sit well with some people — especially Angel City’s Madison Hammond, who claims to be the only Native American playing in the NWSL.

“I’ve spoken with McCall and I know she didn’t intend harm, but phrases like ‘too many chiefs,’ ‘pow wow,’ ‘sitting Indian style’ and many more are rooted in brutal racism and are way too common in our everyday lexicon,” Hammond said in a tweet. “They may seem to be harmless, but they’re not.”

Gotham issued a statement denouncing the comment and Zerboni apologized on Twitter, saying, “im sorry if anything I’ve ever said has offended any1. The last thing I would ever want 2 do is hurt someone’s feelings or make them feel unloved.”

The Red Stars play four games in a row on the road including Sunday’s matchup at Angel City (5-5-3).

Their next home game will be Sept. 14 against Kansas City.

When the Chicago Fire play games in Bridgeview on Aug. 21, Sept. 10 and Oct. 9, area fans will get a chance to see a young goaltender who is literally going places.

Gabriel “Gaga” Slonia, 18, was transferred to Chelsea FC in the English Premier League for a multi-million transfer fee on Aug 2.

The Addison native will stay with the Fire for the rest of the 2022 season but will be considered on loan.

It’s the most expensive transfer for a player in Fire history, and Slonia is the youngest Fire player to sign with a team in a top-five European league.

“Gaga is a role model to many aspiring footballers in Chicago and this transfer demonstrates that a player can progress to the first team from our academy before joining one of the biggest clubs in the world,” Fire Sporting Director Georg Heitz said in a news release.

Missael Rodriguez scored his second goal in as many games for the Fire (4-9-5, 19 points), but St. Louis scored a pair the rest of the way to secure the victory.

The Fire II finish a three-game road trip with a game against the New England Revolution II on Sunday. 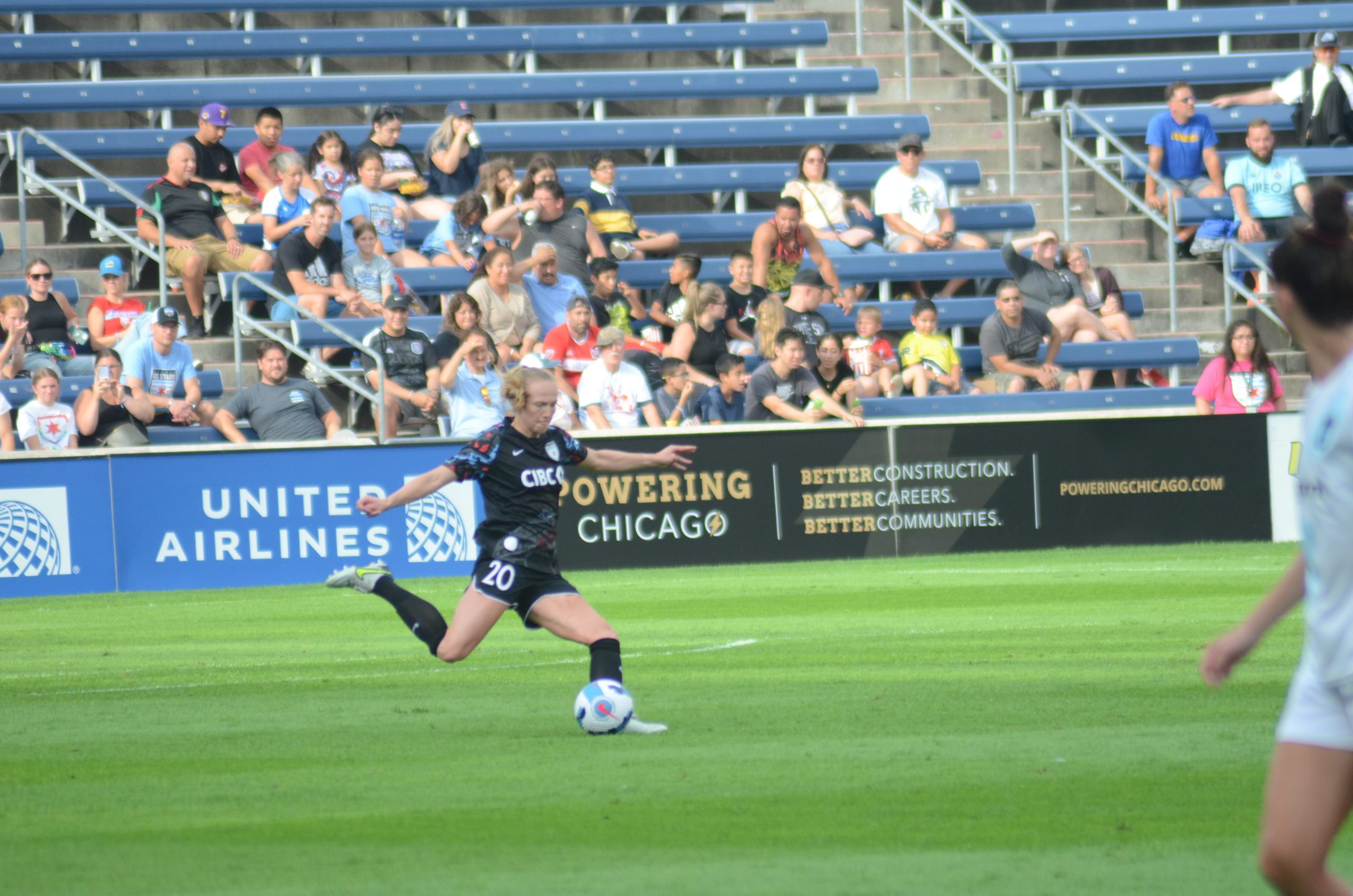 Zoe Morse of the Red Stars gets ready to boot the ball downfield Sunday in a 2-0 win over Gotham. Photo by Jeff Vorva