Brother Rice players go through their drills during the first day of football practice on Monday. Photo by Jeff Vorva

You might say the man they call “Coach Q” was as cool as a Q-cumber on the first day of high school football practice for the 2022 season.

He also was an assistant coach at Loyola High School in Los Angeles, where he learned the craft from Marvin Sanders, who coached at USC and Nebraska.

So, on Aug. 8, when football practice started all around the state, the new Brother Rice head coach sported a shirt that said “One Team, One Way, 100 MPH.”

Yet, minutes before the start of practice, he was calm about the new journey he was about to take. For some, the difference between being an assistant coach and being the boss is huge.

But Quedenfeld was matter-of-fact about how he felt before leading his troops in the first practice.

“It’s just football,” he said. “I’ve had great mentors who have kind of prepped me for this. In all seriousness, it’s nothing new or anything that I’m not accustomed to doing before.”

Quedenfeld is one of four new head coaches at area schools. There were also changes as Argo, De La Salle and Riverside-Brookfield.

Of those four, Brother Rice had the most success in 2021. Former Crusaders head coach Brian Badke bowed out after leading his team to a 10-3 record and reaching the Class 7A state semifinals.

Before the first practice on Tom Mitchell Field on a rainy late afternoon, Quedenfeld spent some time in a classroom with the defense. Last year’s defense gave up 56 points to Joliet Catholic, 46 points to Loyola, 45 to Wheaton North in the semifinals and 36 to Mount Carmel.

Those totals do not exist for Quedenfeld.

One of the anchors on this year’s defense is Trey Pierce, an Evergreen Park resident who has committed to Wisconsin. 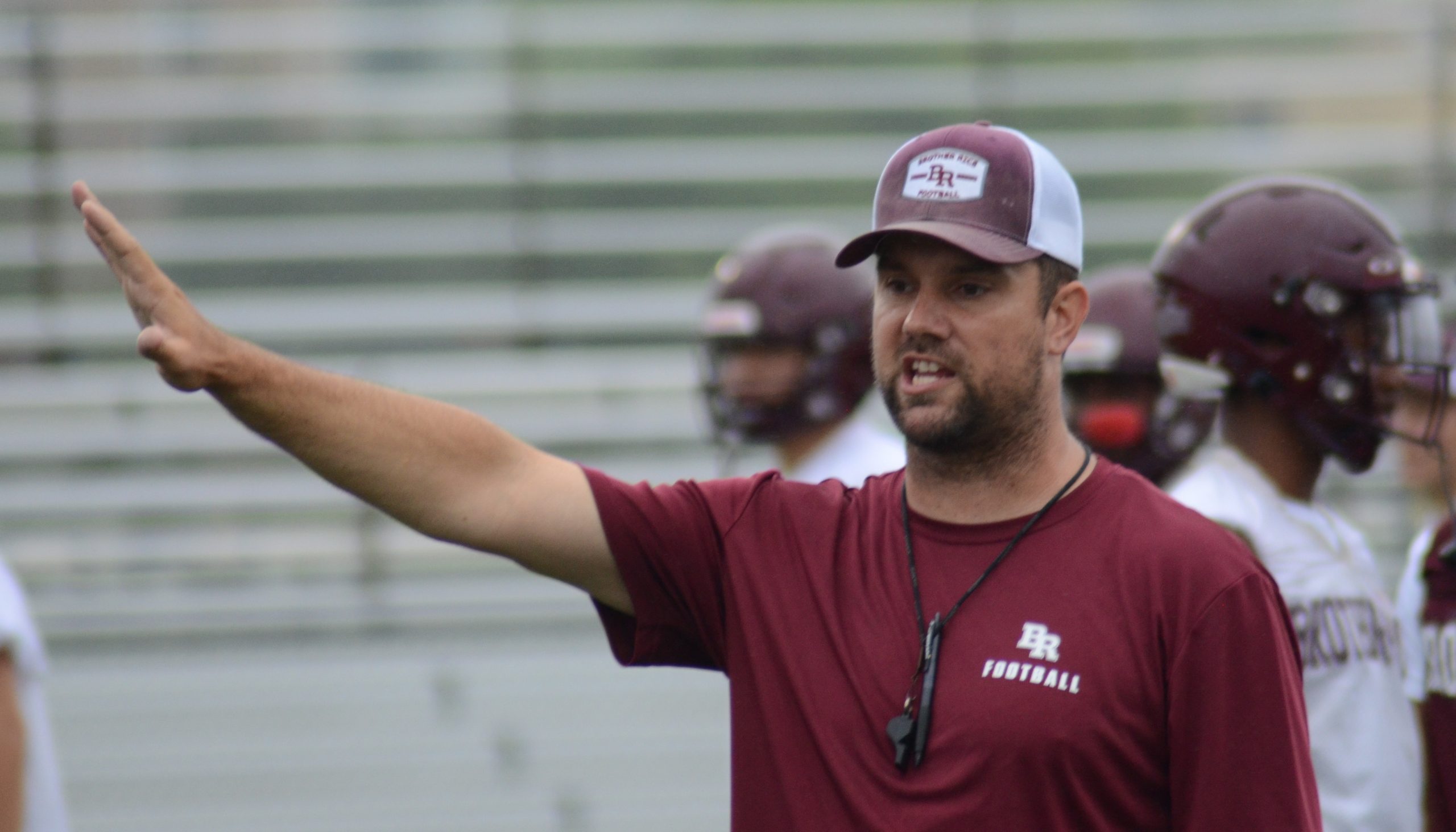 On offense, replacing Jack Lausch at quarterback will be a challenge. Lausch, who originally planned to walk on to the Notre Dame baseball and football teams, accepted a scholarship offer to Northwestern. His passing and running ability will be missed, but juniors Ryan Hartz, Jake Dugger and Marcus Brown will battle it out at that position in camp to replace him.

Texas and California are hotbeds for high school football and Illinois can hold its head high as well. Quedenfeld didn’t want to compare and contrast the talent in the three states but said all are strong.

“In Texas, communities surround themselves in high school, especially in public schools,” he said. “In California, the private schools in Southern California are serious. At Brother Rice, the administration is taking it serious and I wouldn’t have moved if they weren’t serious.”

Changing of the Guard 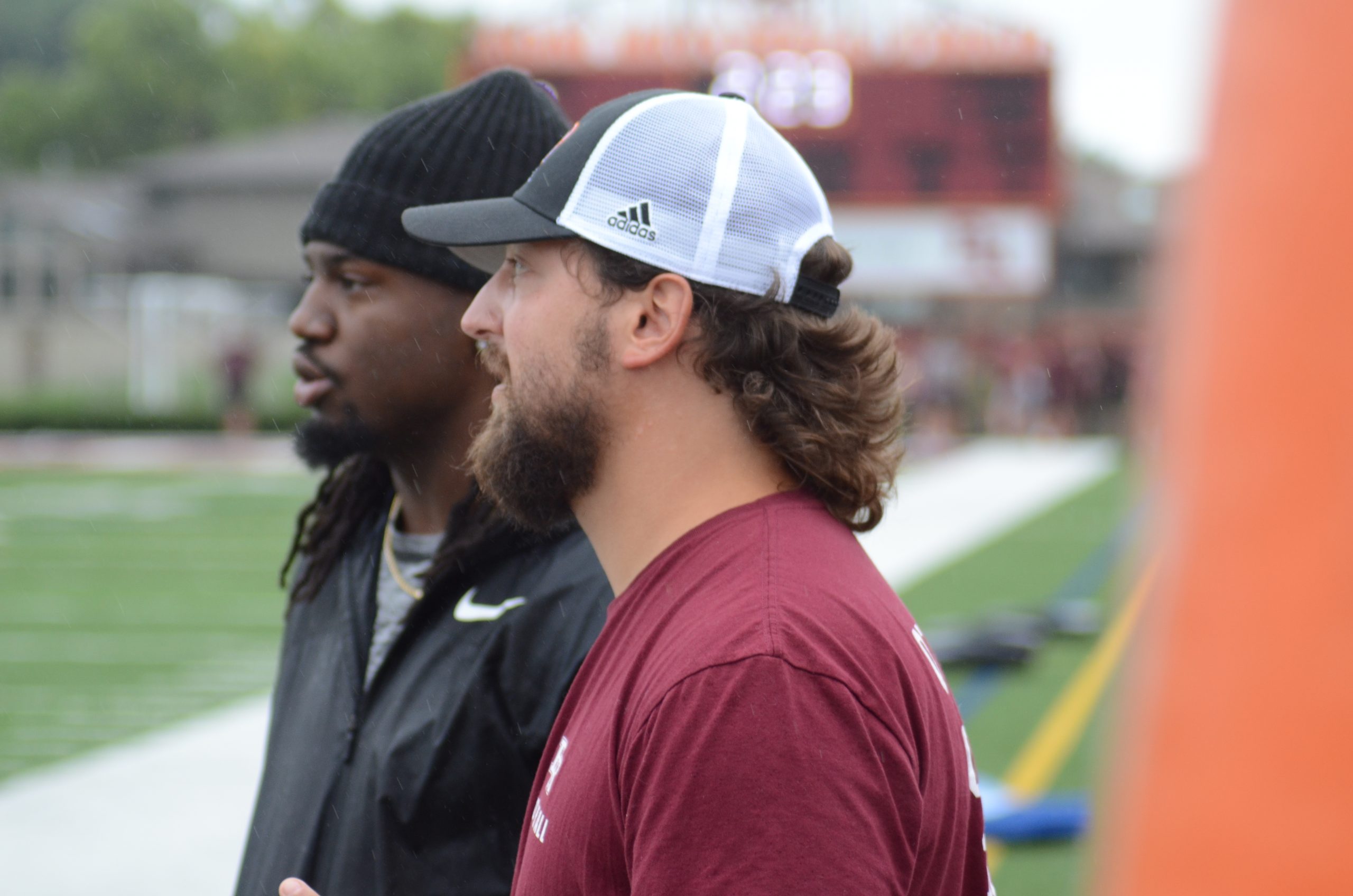 Ricky Smalling, left, and Dino Borrelli — two star players on the 2016 Brother Rice team – take in the action Monday during the first day of practice. Borrelli is serving as the quarterbacks coach for the Crusaders. Photo by Jeff Vorva

Orland Park police arrested Juan G. Regalado, 17, of Orland Park, at 7:05 p.m. July 6 and charged him with reckless driving, unlawful use of a weapon and reckless conduct after he allegedly threw fireworks at pedestrians from his car window as he drove in the 7700 block of 157th Street. His court date was…

Palos Heights police arrested Elias Mejia, 28, of Chicago, just after 11:35 p.m. on June 30 and charged him with driving under the influence (DUI) of alcohol, driving with a blood alcohol concentration (BAC) of .08 or more and speeding after he was stopped by police in the 11700 block of Harlem Avenue, police said.…

Orland Park police arrested Kevin M. Defamo, 28, of Chicago, at 1:41 a.m. July 1 and charged him with driving with an expired registration, driving with a suspended license and operating an uninsured motor vehicle. He was also cited under local ordinance for possession of cannabis after police allegedly found 2 grams of the substance…

by Kristen Wajda staff reporter A former teacher at Stagg High School was convicted last Friday on one count of indecent solicitation of a child after he attempted to lure what he thought was a 13- year-old girl into participating in sexual acts with him. James F. Leonard, 54, an Orland Park resident and former…

by Michael Gilbert staff reporter The Palos Park Police Department has issued a community crime alert after a residential burglary occurred late last month in the 12800 block of Misty Harbour. Jewelry and a collectable Babe Ruth baseball were reported stolen between 9:45 and 10:15 a.m. Wednesday last week, after an unknown subject entered the…

Orland Park police arrested Benjamin F. Sappington, 26, and Robert J. Matlock, 23, both of Ottawa, just before 2 a.m. June 19 and charged each with two counts of battery after they allegedly fought with other patrons at a bar just outside Orland Square Mall. Their court date is July 14 in Bridgeview. In other…

Palos Heights police cited Jennifer M. Scholl, 18, of Chicago, with illegal consumption of alcohol by a minor, speeding and disobeying a traffic control signal just after 1:30 a.m. on June 29 after she was stopped by police for traveling 50 mph in a 35 mph zone in the 12700 block of Harlem Avenue, police…

Palos Heights police arrested Melon M. Keith, 47, of Chicago, just after 9:30 a.m. on June 22 in the 12600 block of Harlem Avenue and charged her with forgery after police learned she allegedly removed mail from mailboxes in several towns and reendorsed checks to herself and attempt to cash them, police said. A bond…