Skip to content
August 11, 2022/Comments Off on Hale and hearty

Luis Gaytan and Anita Cummings of the United Business Association of Midway hold up cucumbers, zucchini and tomatoes--just a few of the fruits and vegetables now growing in the community garden outside Hale School, 6140 S. Melvina. --Photo by Dermot Connolly

The community garden at Hale School that was expanded through a partnership with United Business Association of Midway and other local non-profit organizations is growing in more ways than one this summer.

Besides all the vegetables and herbs planted this year that are now in full bloom outside the school, 6140 S. Melvina, several fruit trees and bushes were added in late July. Grapevines and other additions are expected to be planted soon also, so there should be even more crops to pick in 2023 and beyond.

Hale started the community garden in 2020, and it began to flourish last year with the help of volunteers led by Hector Villalobos, a Hale parent and Local School Council member who built garden boxes and does a lot of the planting and watering. 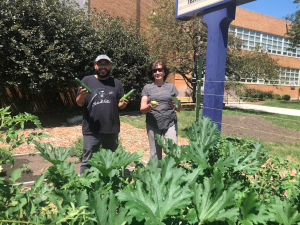 Luis Gaytan and Anita Cummings of the United Business Association of Midway hold up cucumbers, zucchini and tomatoes–just a few of the fruits and vegetables now growing in the community garden outside Hale School, 6140 S. Melvina. –Photo by Dermot Connolly

On weekends, Boy Scouts from Troop 1439, which Villalobos leads, volunteer their time to water and care for the plants. The troop is sponsored by Two Holy Martyrs Parish. The Scouts also built two wooden benches that were placed just outside the garden, but they may only be there temporarily.

After several UBAM member organizations expressed interest in creating a community garden this year, UBAM Executive Director Anita Cummings put them in touch with Hale officials. They agreed to work together on the existing project.

“This project is a beautiful example of what dedicated community partners can accomplish. This is a ‘win-win’ for UBAM, Hale School and our entire community,” Cummings said.

Those involved include the Garfield Ridge-Clearing Community Garden, a group of residents whose plans to obtain a space for their own community garden fell through last year. Vanessa Sepcot and other members of the group have shared their knowledge of gardening with Villalobos and other leaders of the Hale project. Sepcot also provided the mulch for the garden this year.

Luis Gaytan, public health ambassador of Envision Community Services, another UBAM member, has become very involved too. His group applied for and received a $1,400 grant from Microsoft that is going, in part, toward the new plantings.

“We’re learning about gardening as we go,” said Gaytan, who recently filled in for Villalobos while he was on vacation and oversaw the delivery and planting of a dwarf apple tree and a peach tree in the garden. He pointed out two raspberry bushes that were planted at the same time, as well as a pumpkin vine.

“We should be getting strawberries and grapevines soon too,” said Gaytan, explaining that Villalobos plans to build an archway to support the grapevines and serve as an entrance to the garden, which stretches across the front lawn of the school.

“We planted the trees near the front fence, so people can pick the fruit from the sidewalk,” he explained recently, as he and fellow Envisions public health ambassador Esmeralda Anaya watered the new trees.

The office of 13th Ward Ald. Marty Quinn donated soil in June for the garden to get started, and now tomatoes, cucumbers, zucchini, a few varieties of peppers, as well as basil, cilantro and other herbs are available for local residents to pick and take home. There is still some of the soil left over, and Villalobos may build another garden box so the remaining soil can be used to plant even more crops.

“The garden is growing strong and has provided lots of veggies for the community. I love seeing families walk by and engaging with the garden to see what is growing and how it is growing,” said Samantha Kyme, dean of students at Hale and leader of the culture and climate program there. She serves as point person for the community garden project.

Hale kindergarteners got involved this year by planting sunflowers, and the plan is for the garden to be used as a learning experience for students in other grades as well.

“I’m pretty excited about all the additions and how well it is doing,” said Gaytan, noting that the community garden has the potential to benefit residents from throughout the Southwest Side.

He explained that Envision staff help stock and maintain the Good Neighbor Love Fridge at 6601 S. Pulaski, and some of the produce will go there.

Love Fridges, essentially mini-food pantries, are located in neighborhoods around the city are open to anyone in need of food.

“If we see fruit and vegetables getting ripe and not being picked by neighbors, rather than letting it go to waste we will bring it to the Love Fridge,” said Gaytan.

Regarding the grant that is funding a lot of the expansion, Gaytan said the last $600 will be awarded after the project is inspected.

“I wouldn’t mind giving that money to Hale for maintaining the garden, because their hoses and other equipment are being used,” he said. Gaytan suggested that eventually adding an automatic watering system might be helpful as well.

What’s old is new again at the GRCL

Almost exactly seven years after he was sworn in as president of the Garfield Ridge Civic League, Hank Pukala (right) formally stepped down last week. He announced he is retiring and moving to California. His replacement is also his predecessor. Rick Techman (next to Pukala) served as GRCL president for a number of years. Also…