August 13, 2022/Comments Off on Tunes and tons of local restaurants come together at the Taste of Orland

American English, an award-winning Beatles cover band, entertained the large crowd for over two hours, despite on-and-off rain, as the final act of Sunday's event. (Photos by Isabella Schreck)

The Supremes, John Mellencamp and The Beatles came to the Taste of Orland.

“I was really impressed with American English,” Rebecca Whealan, of Palos Heights, said. “From the costumes to their sound [Eric Michaels] as Paul McCartney, who played lefty just like actual Paul McCartney. It was absolutely wonderful.”

Hundreds of people parked their lawn chairs on the grass in front of the main stage or sat at the dozens of picnic tables surrounding the field to listen to each of the bands that came up to the stage.

American English closed out the three-day weekend, entertaining a crowd of fans young and old with Beatles’ costumes, a two-hour set list and even British accents.

The Taste, held Aug. 5-7 with free entry, featured various entertainment at the site outside and inside the Civic Center.

As bands played from the Village Green each day, attendees parked their lawn chairs in the grass or sat at the many picnic tables on the grounds while eating food from a number of local restaurants. Cooper’s Hawk, Buona Beef and Papa Joe’s were only some of the businesses there. Nothing Bundt Cakes and Rainbow Cone offered dessert options. Multiple vendors offered alcoholic drinks.

“I really enjoyed the diversity of all the foods and entertainment,” James Crowley, of Beverly, said. “The chicken shawarma is delicious.”

“We really enjoyed our time together,” said Vista Fletcher, who came to the Taste with her son, Anthony. “Anthony was able to spin the wheel [at one of the tables], and he won a little prize. He got some Mo’s [Chinese food], and it was really, really good. It was just nice family time.”

The Taste of Orland kicked off Friday at 5 p.m. with a country-music performance from Hillbilly Rockstarz and later on a blast from the ‘80s, which lasted the rest of the night. 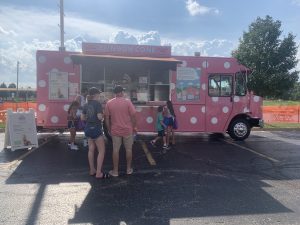 Rainbow cone brought its pink truck to the Taste grounds, selling its classic cones to help people beat the heat.

Saturday had the most packed lineup of the weekend.

Tom Holland & the Shuffle Kings, the first band of the day, played the blues, followed by The Motor City Revue (Motown) and at night a variety show.

Fletcher, of Orland Park, said she and her son also enjoyed the final act.

“The band 7th Heaven was awesome,” Fletcher said. “One of the songs we heard there was ‘Life is a Highway.’ It’s in the movie ‘Cars,’ so when we came home, we watched it because when we heard the song, he got all excited. I was glad I was able to go.”

To beat the heat, people went inside the Civic Center for trivia on television and movie favorites and Bingo.

Sunday’s rain, which came sporadically throughout the event, did not stop the final day of festivities, which included a performance from the No Limit Laughs Comedy Improv group and tributes to John Mellencamp and the Beatles.

“If anything, it was way more fun to dance in the rain with all my friends while Beatles music played,” Whealan said. “It was a great time. Rain didn’t stop us.” 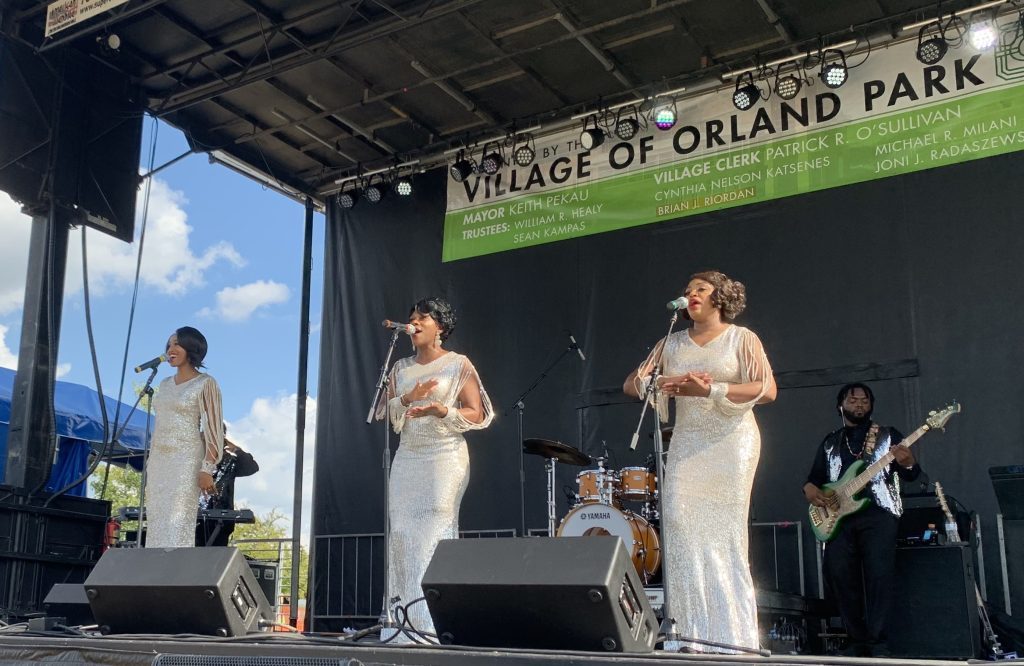 Three singers from the Motor City Revue gave a tribute to the Supremes, singing songs such as “Stop! In the Name of Love” and “Baby Love.”