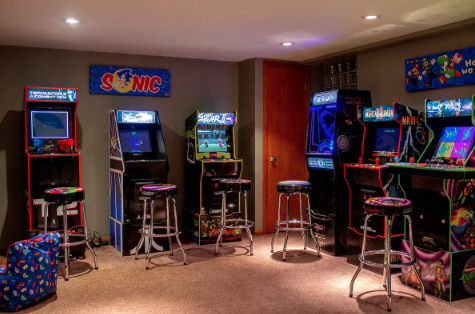 The basement at 5304 S. New England has been transformed into a pinball and video arcade by the house’s new owner. --A photo posted by the owner to airbnb.com

The short-term rental of the single-family home at 5304 S. New England (listed as “Mario’s Pad” on airbnb.com) will continue for the weeks and months ahead, despite the objections of some of its neighbors.

“The meeting went well,” Tabares told the Clear-Ridge Reporter & NewsHound late last week. “It was good to meet him and share with him the views I’ve heard from many people who live on that block and in the immediate area.” 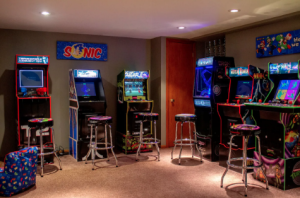 The basement at 5304 S. New England has been transformed into a pinball and video arcade by the house’s new owner. –A photo posted by the owner to airbnb.com

Those views include fears that 5304 will essentially become a party house and possible a menace to the well-being of the neighborhood.

“How will any of us know who [Williams] is renting to, and when?” asked one neighbor who requested that his name not be disclosed. “The renters may be just a group of nice people; but on the other hand, it could be a bunch of gangbangers having an all-night party. Nobody knows.

Williams purchased the property in May, applied for and obtained a short-term rental license from the Chicago Department of Business Affairs and Consumer Protection and then registered with airbnb.com.

He has said he is a responsible property owner dedicated to being a good neighbor, and that he has done everything legally and above board.

If enough legitimate complaints are made, Tabares said, Williams could be summoned to an administrative hearing with BACP in City Hall, possibly resulting in the revocation of his license.

To date, she said, there has been just one 911 call made in recent weeks, regarding 5304—according to what police have said.

Mario’s Pad is listed on airbnb.com at a rate of $899 a night, with a two-night minimum. After fees are added, the rate jumps to near $1,100 a night. The listing has a clearly stated prohibition on parties, events and indoor smoking.

“I think the price itself is an indication that you won’t see lowlife gangbangers renting it,” said another neighbor, who also asked that his identity not be disclosed. “Why don’t these neighbors raising such a fuss mind their own business? [Williams] is doing everything legally.”

Tabares said she is “very upset” with the process by which property owners obtain BACP licenses to rent houses. She said that so many other things homeowners want to do that require city permits—everything from putting an addition on a home to building a driveway to even having a block party—take longer than getting a BACP short-term rental license.

Sitting in on the meeting at Tabares’ office was Garfield Ridge Neighborhood Watch President Al Cacciottolo.

“The alderman ran the meeting well,” he said. “She was very authoritative and made it clear what the community expects [of Williams]. Garfield Ridge is a place where people watch out for each other. We protect each other and each other’s property. That was made very clear. I don’t expect any problems going forward.”

Click here to read earlier coverage of this issue.