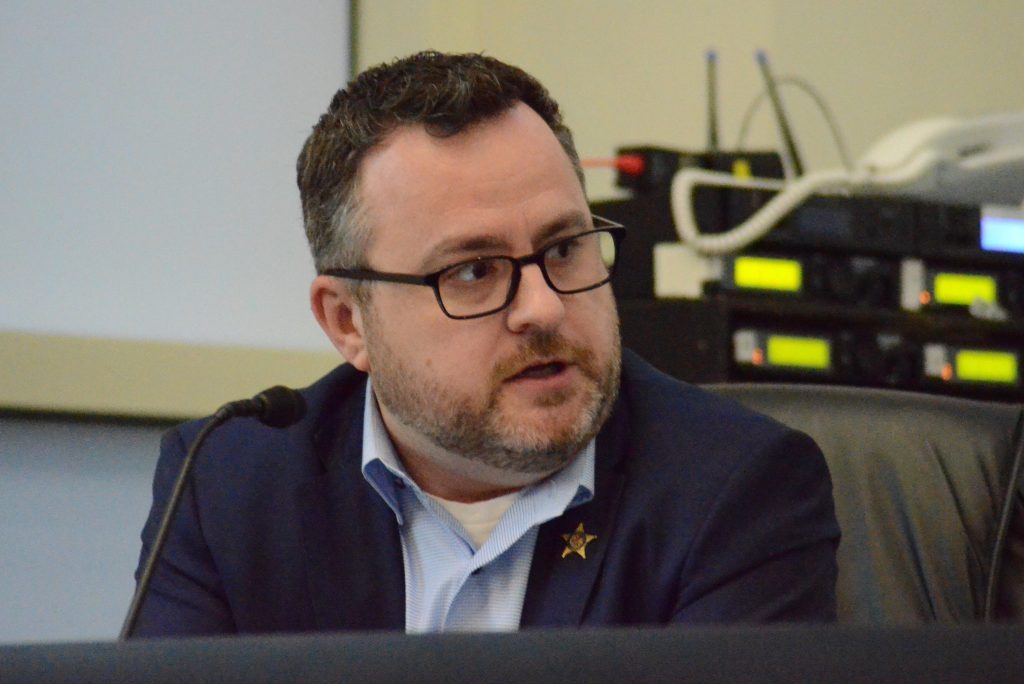 Orland Park Trustee Sean Kampas said the board will not be hasty in making decisions on how to design the rest of the Main Street Triangle. Photo by Jeff Vorva

Current members of the Village of Orland Park Board of Trustees believe that slow action or no action is better than making a bad decision when it comes to the decades-old Main Street Triangle issues.

In short, a portion of the project at 143rd Street and LaGrange Road was completed under the watch of previous boards. More needs to be done. But because the University of Chicago Medical facility and Ninety7Fifty on the Park residential building are multi-stories high, the vision of what it could have been and what it has turned out to be are two different things, according to the current office holders.

“Again, we’ve been going at this for a long time – about 20 years,” Mayor Keith Pekau said at the Aug. 15 board meeting. “What was sold to us was this quaint walkable downtown like Frankfort and it was shot out the window by four-story and five-story buildings.

“And we’ve heard things like [having a feel of downtown] Naperville but those are four block-by-four block or three block-by-three block areas. This is one block by one block. It’s a much smaller area.”

The board is taking small steps to rectify the situation and voted to recommend Orland Park-based Edwards Realty Company as consultants on the project.

Edwards has drawn up plans in the past that have pleased the board for the most part. But when plans came that called for more than 60 percent of the remaining parcels to be residential, Pekau was not pleased.

Edwards officials reversed course and came up with a new gameplan, one that the board is willing to work with.

“We’ve all seen the plans and when we interviewed them, we pointed out some of the concerns that we had,” Pekau said. “Some of those concerns were that there was too much residential. They understood that concern. They mentioned it’s possible they won’t have residential. We said, ‘the less the better.’ They took that to heart.

Trustee Sean Kampas said the board will move forward cautiously and that “Previous administrations believed they knew the market and they lost.”

Thus, the board still wants a downtown area with shopping, office space and entertainment.

“All of us on the board are painfully aware of the challenge that this corner of our village represents,” Kampas said. “We’ve inherited this challenge and are taking a different course and now we’re moving forward.

“Pressure to do something after decades of inaction led to now having three multi-story structures blocking out the southern boundary of this development. We will be more reliant on the eastern entrance.”

Pekau said he was resigned to more tall buildings in the wake of what has already happened there.

“Everything is tall in the front, and we may have more tall stuff coming,” he said. “But we will still try to build something that will be very nice.”

What’s old is new again at the GRCL

Almost exactly seven years after he was sworn in as president of the Garfield Ridge Civic League, Hank Pukala (right) formally stepped down last week. He announced he is retiring and moving to California. His replacement is also his predecessor. Rick Techman (next to Pukala) served as GRCL president for a number of years. Also…