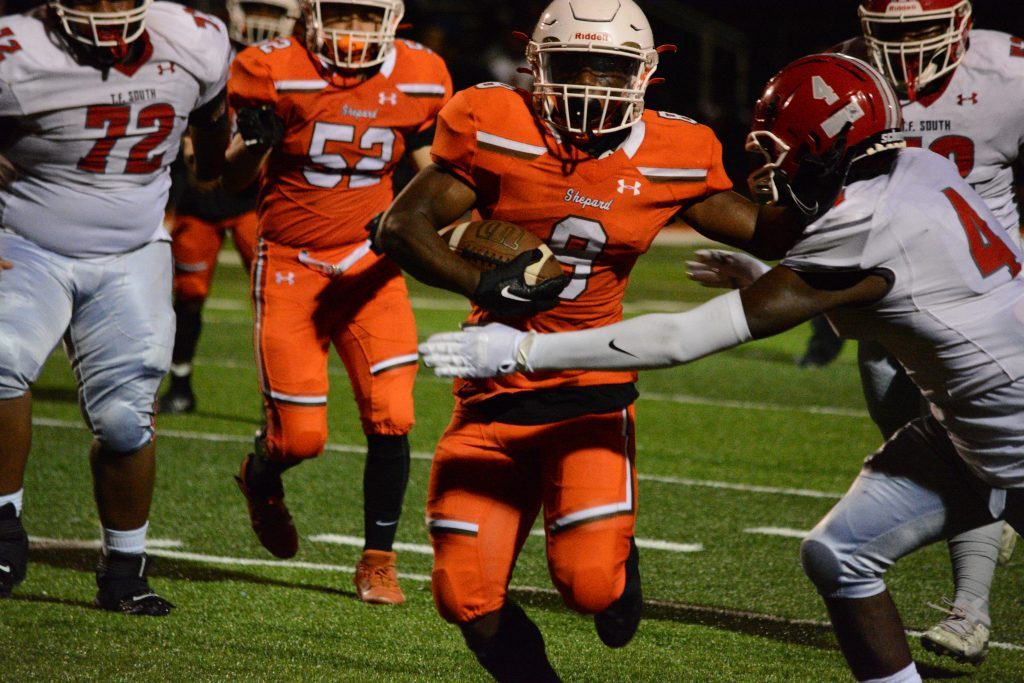 Shepard senior Xavier Rogers takes on a T.F. South defender during the Astros’ season-opening victory over the Red Wolves on Aug. 26. Photo by Jason Maholy

Shepard coach John Rone said he challenged Xavier Rogers to get stronger, faster and better during the offseason.

If Week 1 of the 2022 season was any indication, the senior running back/linebacker fully embraced that challenge on all fronts.

Rogers scored two touchdowns and was a key cog in a defense that forced and recovered four fumbles in the Astros’ 37-24 season-opening victory over T.F. South on Aug. 26 in Palos Heights.

Rogers opened the scoring in the first quarter with a 57-yard fumble return for a touchdown, then closed it with a game-clinching 63-yard sprint with less than 3 minutes to play.

He helped set up his second score when, with Shepard (1-0) clinging to a 31-24 lead and the South (0-1) offense driving, he broke into the backfield and laid a crushing hit on Red Wolves junior quarterback Dion Hayes. Rogers’ hit knocked the ball loose and the Astros recovered.

Four plays later, he took a handoff through the right side of the line and galloped 63 yards for the score.

Rogers has worked to address getting caught from behind, which Rone said has been one of the few things keeping the three-year varsity player from being an elite game-changer. 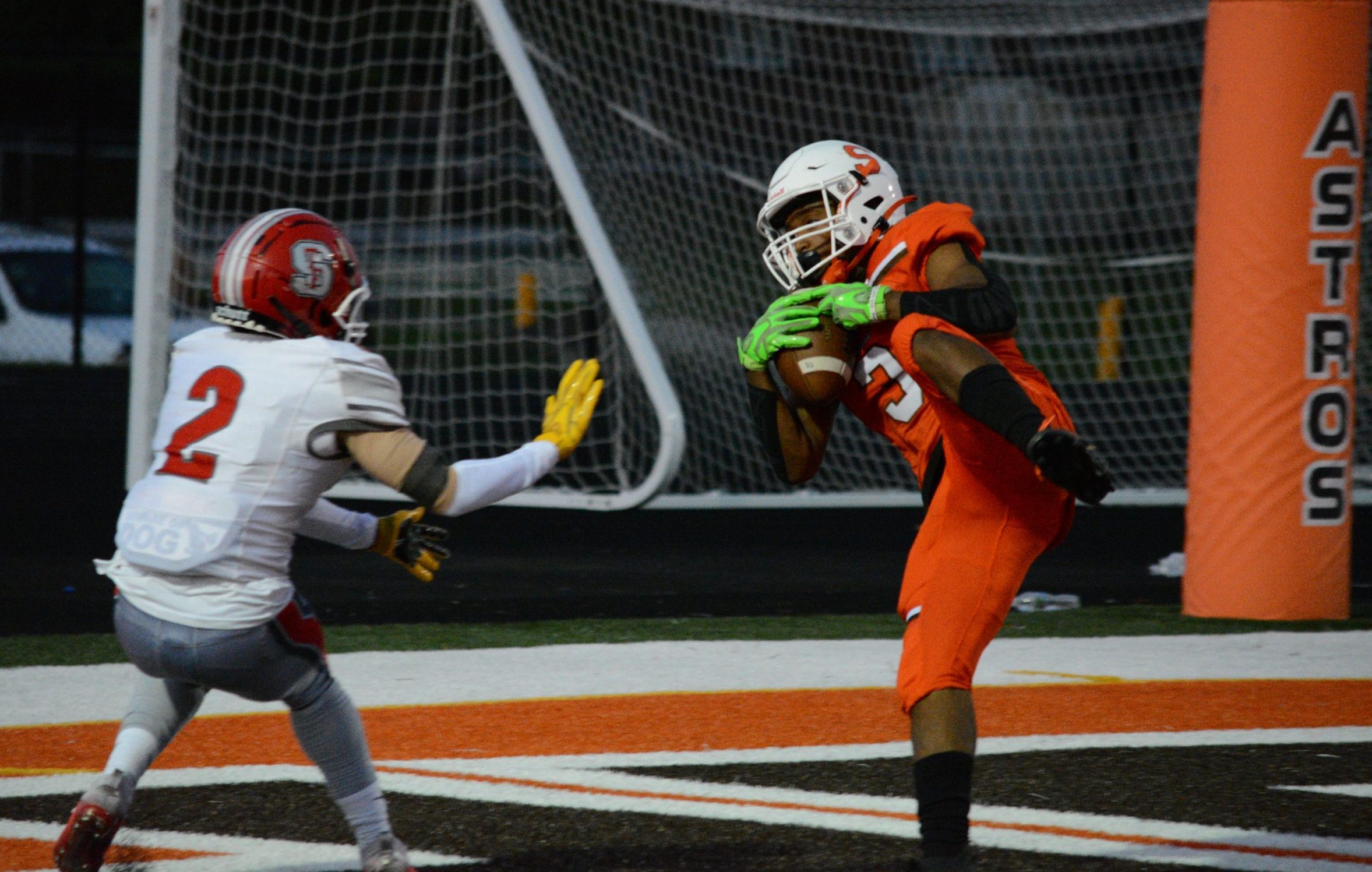 Shepard senior wide receiver Elijah Tyson makes a twisting catch of a Quran McClellan pass to score a touchdown in a 38-24 win over T.F. South. Photo by Jason Maholy

“I told him, ‘If you’re going to be a running back and be as good as you say … you used to make a lot of good runs and get caught,” Rone said. “Those super-duper running backs, they don’t get caught.

“That last run he didn’t get caught.”

Rogers’ efforts thwarted a spirited comeback by the Red Wolves. The Astros raced out to a 17-0 first-half lead and were up 23-8 in the third quarter with the chance to put the game out of reach. But after having a first down and goal-to-go from the 1-yard line, South’s defense held strong and offensive penalties pushed the ball back, resulting in a field goal attempt by Zander Soltysiak that sailed wide left.

Soltysiak had earlier in the game drilled a 39-yarder that would have been good from at least 50.

South responded by driving nearly the length of the field to creep within eight points, and a fumble on Shepard’s next possession kept the door open for the visitors. The Red Wolves took advantage, scoring again and converting their third two 2-point conversion of the evening to take a 24-23 lead.

Another Astros fumble on the first play of the final quarter put the hosts in a potentially precarious spot, but South gave the ball right back via a fumble of their own — their third of the night. On the first play of the ensuing drive, McClellan hit Hodges over the middle and Shepard reclaimed the lead with 7:25 to go. 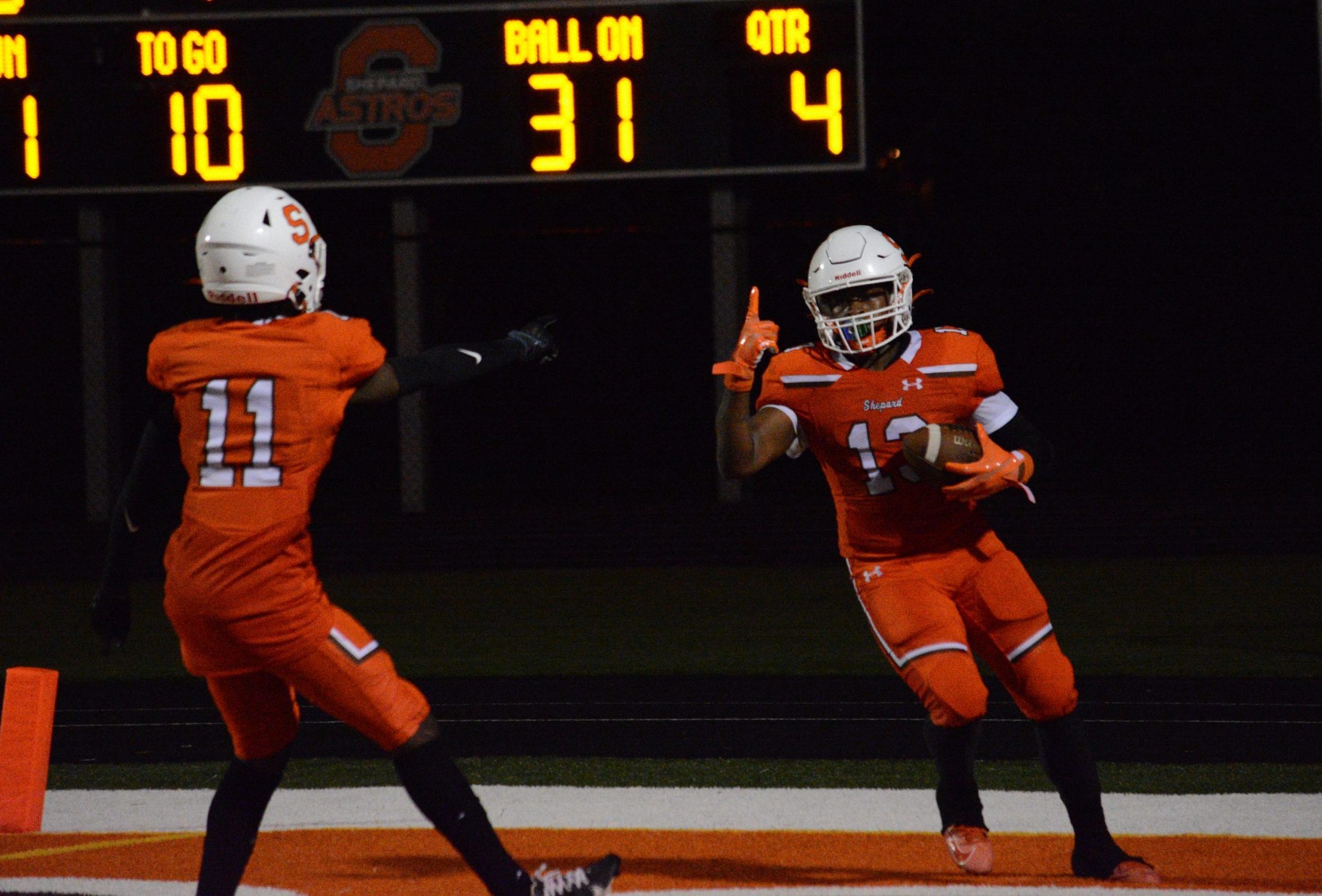 Shepard senior running back Damarrius Hodges (right) celebrates after scoring the go-ahead touchdown on a 31-yard pass from Quran McClellan during the Astros’ 37-24 win over T.F. South on opening night. Photo by Jason Maholy

The Red Wolves were not done, however, and marched 47 yards in five plays to the Astros’ 33-yard line.

But that merely set the stage for Rogers’ late-game heroics. He made his second huge defensive play of the night with his strip-sack of Hayes, then minutes later vanquished any thoughts South had of coming back with his game-closing touchdown jaunt.

Rone said Rogers — a three-year varsity player who has been a team captain since early last season — has always been a hard worker, but took his training to a new level last offseason and has become more of a leader.

“He was on a mission to improve this offseason to where he didn’t get caught [from behind],” Rone said. “He took track a lot more serious than he usually does; he would run at track then come in and lift weights after.

“He’s only done every single thing we’ve asked. He doesn’t miss a day, doesn’t miss a rep. So, as a guy whose been lucky enough to coach him for three years, I wasn’t surprised (by his performance).”

Rone was also encouraged by how his team weathered the storm after allowing a 15-point lead to slip away in the second half.

“We preach mental toughness and fighting through adversity,” he said. “Things are not always going to go the way you want, especially when you’re playing a good football team like TF South.

“You have to just keep playing and be relentlessly disciplined. We preach that to these guys and they’ve bought in, and it showed tonight.”