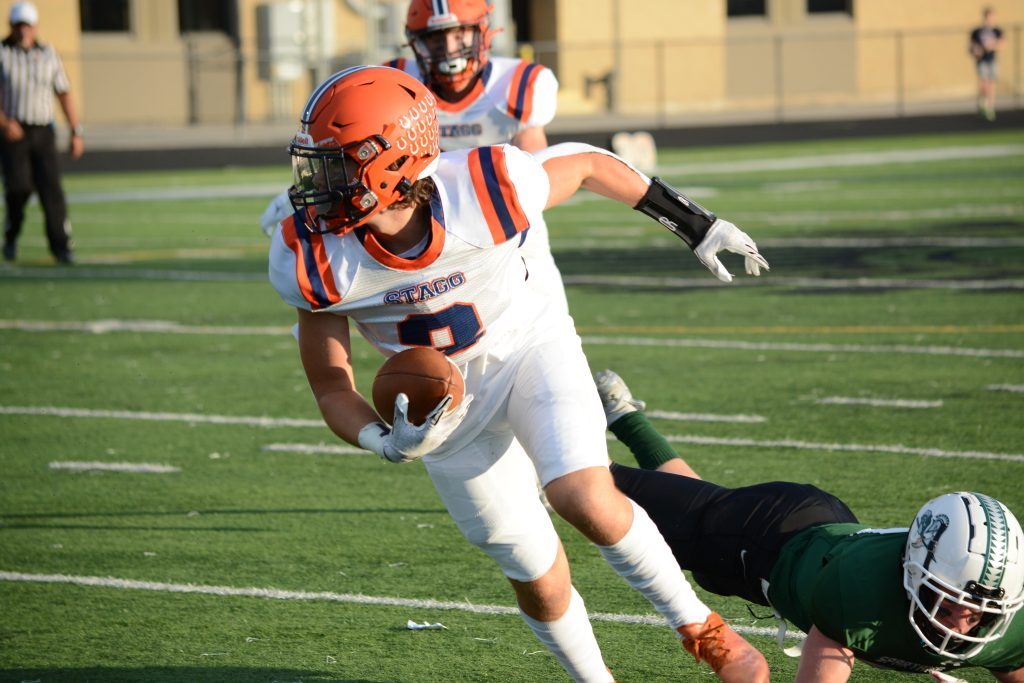 Stagg coach Colt Nero and his Chargers came into this season expecting to win.

Some might consider that a lofty expectation considering the program had entering 2022 lost 23 consecutive games and had not been victorious in Nero’s time at the helm, which began with the truncated 2021 spring season.

But that expectation has been met in each of this year’s first two games. After breaking the win drought and getting Nero his first career victory with an opening-night triumph over Reavis, the Chargers ran their streak to two with a 42-20 trouncing of Oak Lawn on Sept. 2.

The wins are the first consecutive victories for Stagg since September 2018, when it defeated Thornwood and Thornridge in Weeks 4 and 5, respectively.

“Guys are working hard,” Nero said. “We put in a ton of time in the offseason. Guys have bought into what we’re doing and now we’re reaping some of the benefits.

“Two wins feels good, but at the end of the day it’s just two wins.”

Junior quarterback Lebarion Gilmore started the scoring with a 16-yard touchdown pass to senior wide receiver Dan Sweeney, who made a nice grab in the corner of the end zone.

Oak Lawn’s subsequent possession ended with a failed fake punt on fourth-and-nine from its own 34-yard line. Two plays later, Gilmore found Justin O’Bradovich wide open in the flat, and the senior wideout did the rest, breaking a tackle, eluding another defender and then carrying a third the final 10 yards into the end zone for a 14-0 Stagg lead.

Gilmore completed 7 of 10 passes for 141 yards and two touchdowns, and added 90 yards rushing.

“He’s our leader,” Nero said of Gilmore. “The guys trust him, the coaches trust him. He works his butt off every day, puts in his time in the film room and in the weight room.” 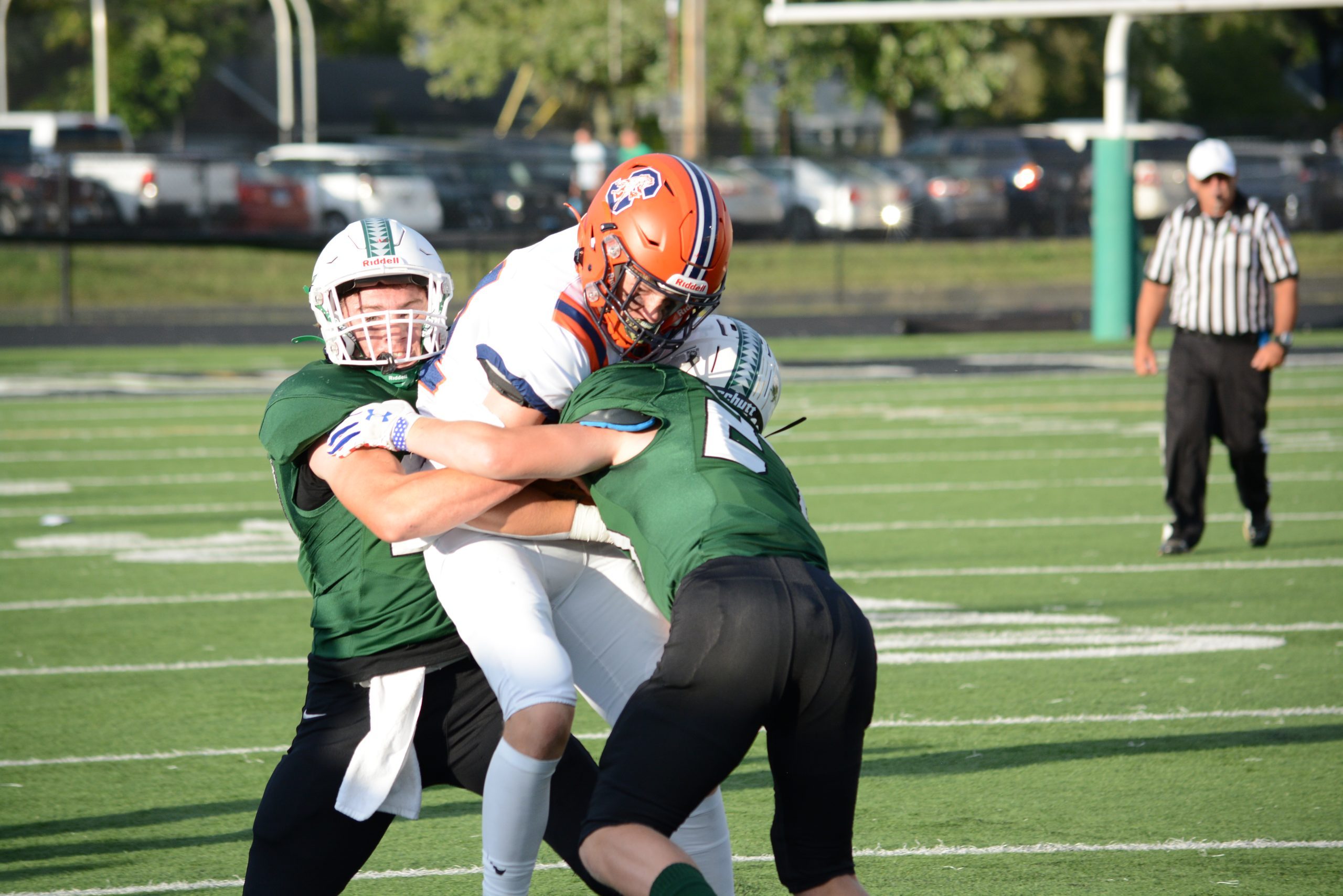 Sweeney had four receptions for 81 yards and a touchdown. O’Bradovich finished with two catches for 45 yards and a TD.

“We’ve got a new mentality,” O’Bradovich said of the Chargers’ early-season success. “This is not all we’re doing. We’re not finished.

“We’re winning, we’re on a streak and I’m just looking forward to next week.

“Next week” is Friday at Lincoln-Way East in a SouthWest Suburban Conference crossover. The Griffins are off to a 2-0 start and have for the past 18 seasons been among the premier programs in Illinois. East has the highest winning percentage in state history (minimum 250 games) at .832 (208-42). East St. Louis is a distant second at .785.

Stagg also got two touchdown runs from Zach VanLoon (10 rushes, 45 yards) and another from Josh Frolich.

Anthony Sukalo returned an interception 21 yards for a touchdown and recovered a fumble.

For Oak Lawn, Ayham Salah tossed a 10-yard touchdown pass to Jack McGlynn and also ran for a 10-yard score.

The Spartans’ offensive effort was less than crisp, but much of that had to do with the Charger defense. Sophomore defensive tackle Terrence Williams had seven tackles, including two sacks and three tackles for loss. Williams and junior Oswaldo Macias are part of a Stagg defensive front that was disruptive and got consistent penetration into the Oak Lawn backfield.

“They’re awesome,” Nero said of his two tackles. “Those guys had fantastic offseasons, put on weight, muscle and all that, worked on their speed.”

“The offseason” was also referenced by several Chargers’ players as a big reason for the teams’ success. Gilmore said players spent a lot of time together getting to know each other, whether that was in the weight room, engaging in community service projects or just hanging out.

“We’re definitely rolling and it feels good to have people to connect with,” he said of the Stagg offense. “We built a lot of chemistry over the offseason. We did a lot of bonding; a lot of lifting and a lot of bonding, and we’re using it to our advantage.”

Taking on Lincoln-Way East will be a couple steps up from the competition the Chargers have faced in their first two games, but the team is playing with confidence and executing on both sides of the ball.

“Everything’s happening right now because of the time they put in,” Nero said. “It’s not a surprise. It’s probably surprising everyone else but we’re not surprised. 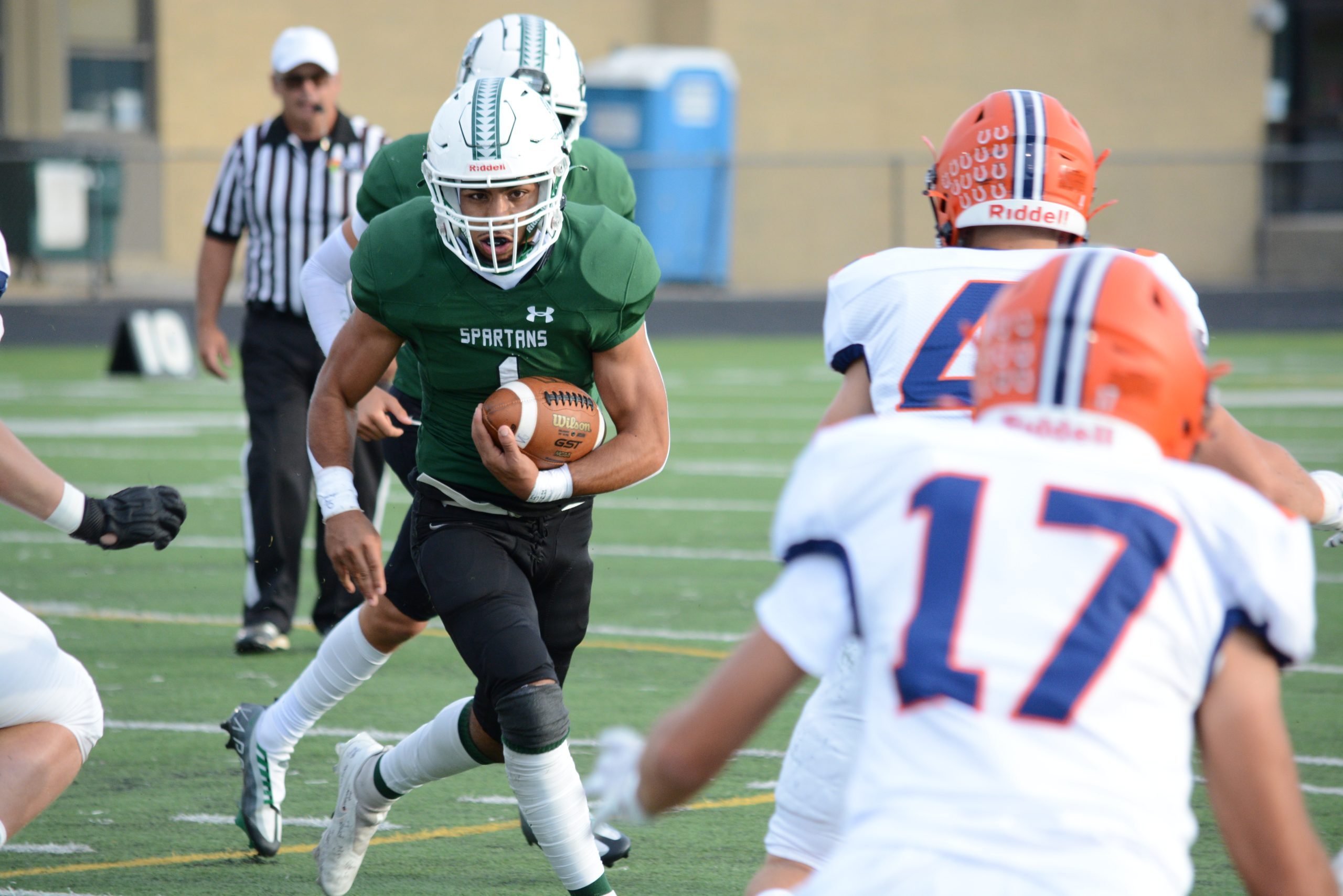 Oak Lawn senior running back Rakan Eid looks for running room during the Spartans’ 42-20 loss to Stagg on Sept. 2. Photo by Jason Maholy