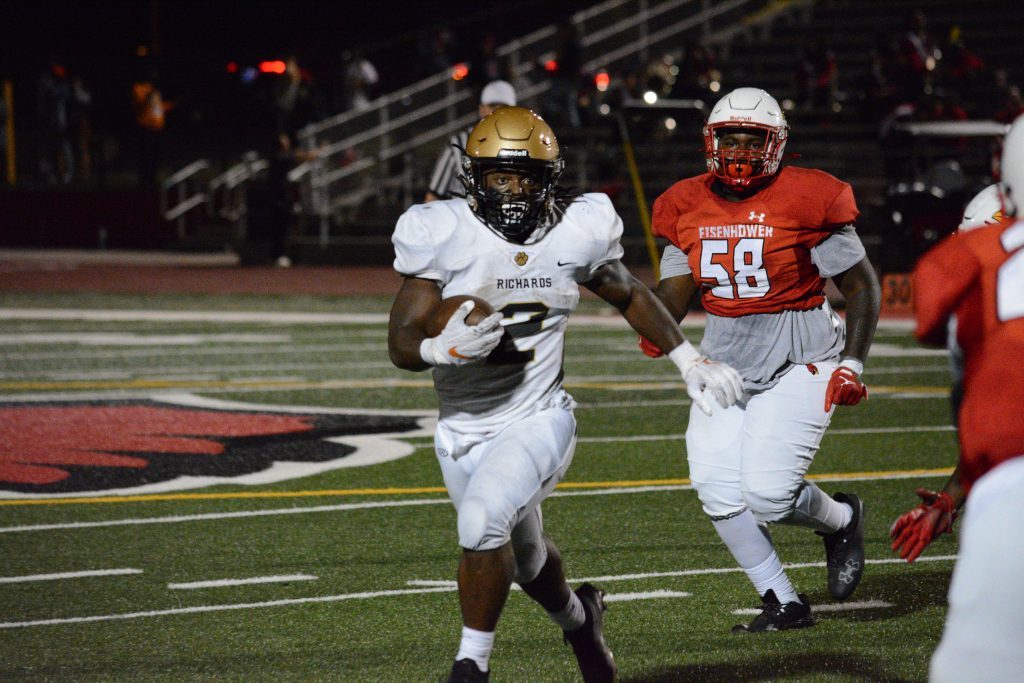 Richards senior running back Michael Maura rambles for yards during a 25-20 win over Eisenhower on Sept. 9. Photo by Jason Maholy

Football: Richards holds off Ike to break into win column

It was a bit of an ugly win in a rarely pretty game, but Richards made enough plays to defeat Eisenhower and break into got into the win column via a 25-20 victory in the South Suburban Red opener for both teams.

Senior defensive back Terangie Eskridge Jr.’s interception with four minutes remaining in the game helped the Bulldogs seal their first win of the season on Sept. 9 in Blue Island.

“We needed that,” said Richards coach Tony Sheehan, whose Bulldogs lost their first two games of the season to Morgan Park and Marist by the combined scored of 79-8. “We played two very good teams and we got it taken to us, but I think in the long run it’s going to make you better.

“You play good teams it only makes you better.”

Richards and Eisenhower combined for seven turnovers in a first half — three by the Bulldogs — that also featured three muffed punts and a Cardinals touchdown on a kick return. Things settled down in the second half, but Richards pushed Ike’s giveaway count to a half dozen with two of its three interceptions. The Bulldogs also recovered three fumbles.

The final pick by Eskridge gave the ball back to the Richards offense, which ran out the clock to preserve the victory. 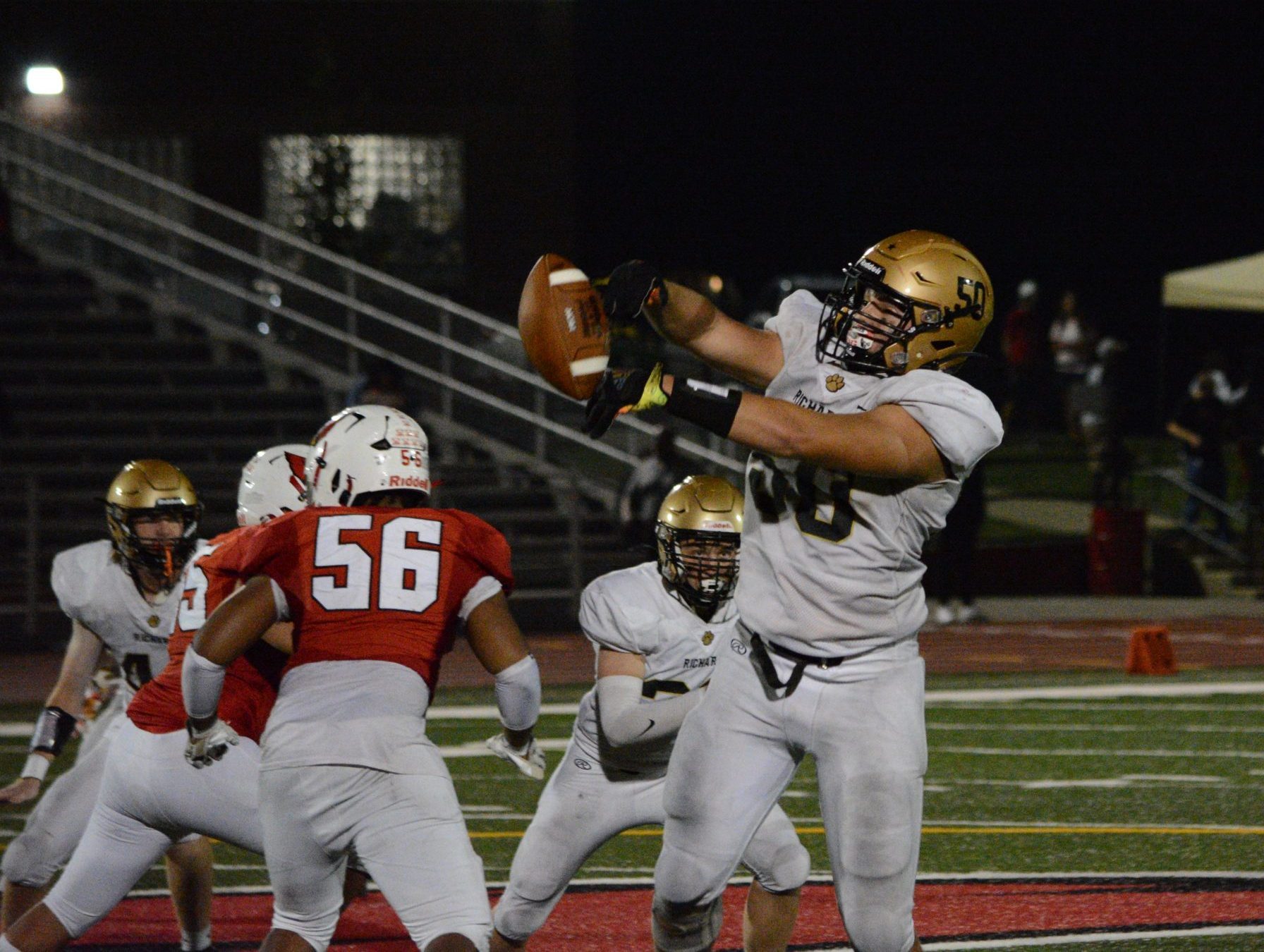 Richards senior linebacker Michal Lupa bats down a pass during the Bulldogs’ Week 3 win over Eisenhower. Photo by Jason Maholy

Eskridge did not play in the first half because he was late to practice.

“So I had to make some type of play in the second half,” he said. “I just stayed on my man. I trust myself one-one-one with anybody.”

The Richards offense found the going tough at times, but the combination of running backs Maura and sophomore Miles Mitchell helped control the ball and inflicted damage on the Cardinals defense. Maura, the more classic power runner of the two, carried the ball 33 times, while Mitchel ran 16 times for 45 yards.

Maura said the Bulldogs are built to pound the ball on the ground.

“We spent the whole summer in the weight room, got stronger, and we’ve got a great running back coach,” he said. “We practice this every day.

“When we do what we’re supposed to do, nobody can stop us.”

Sheehan said the Bulldogs’ physicality was a factor in the win. After getting knocked around by a physically superior Marist team during a 40-6 loss in Week 2, he was happy the way his team responded.

“We’ve got to be physical,” he said. “That’s what Richard football is all about is being physical, and I thought our guys did a good job tonight in being that. They stepped up.”

He was also encouraged by the Bulldogs running game.

“Mike (Maura) ran hard and he was laying the boom, too,” he said. “That’s the Mike that we saw during the summer that we were excited about, so that was a good thing to see.”

Mitchell got the Bulldogs on the board with a one-yard touchdown run in the first quarter. 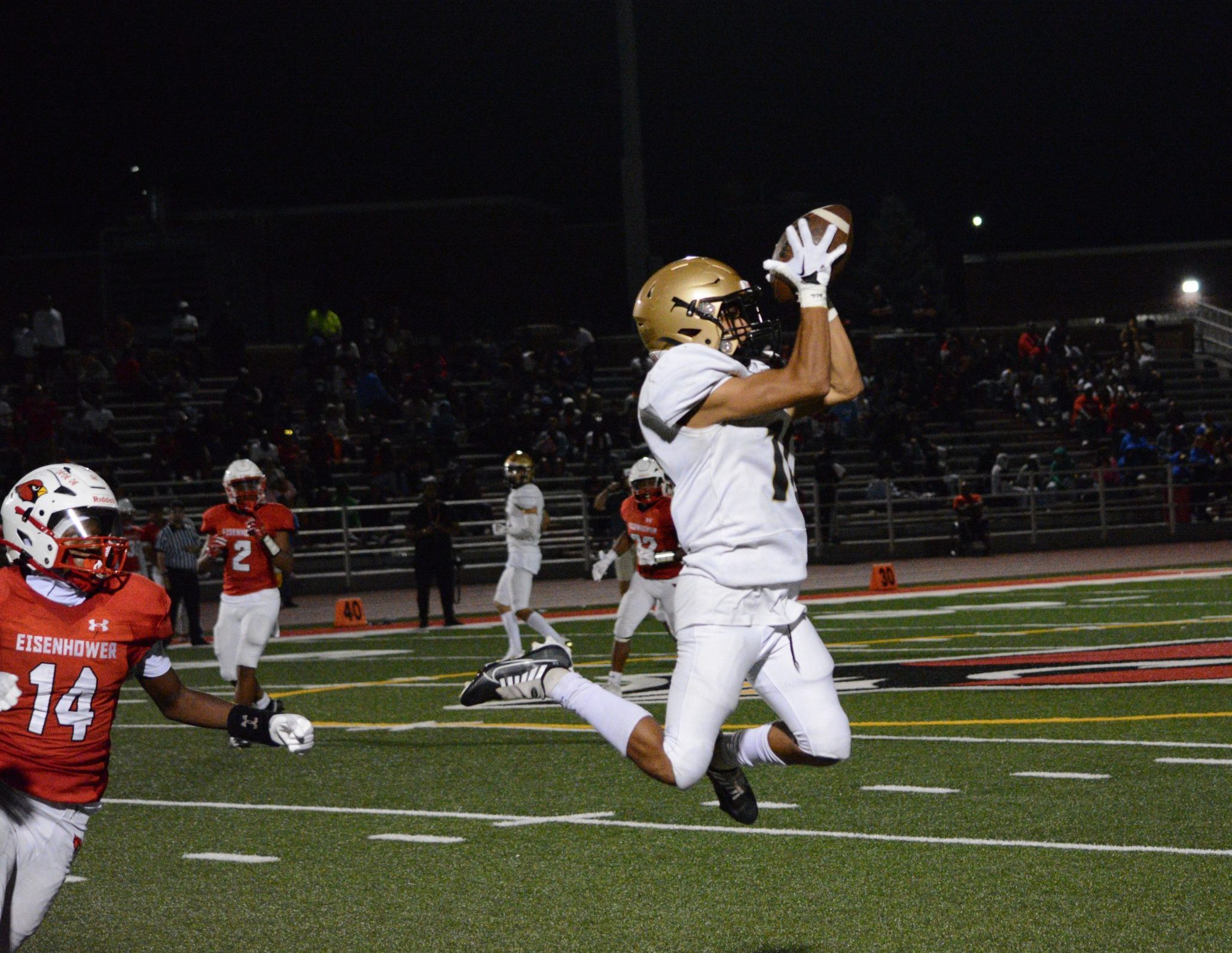 Richards junior wide receiver A.J. Pawlecki leaps for a catch during the Bulldogs’ win over Eisenhower. Photo by Jason Maholy

After an Eisenhower touchdown narrowed the score to 7-6, Maura scored on a 17-yard catch-and-run off a right-side screen to extend it to 13-6.

The two backs were complimentary of each other’s skills.

“It’s great learning from him and taking everything from him,” Mitchell said, referring to Maura. “I’m just getting more experience, getting used to everything.”

Maura said Mitchell has the potential to be great.

“He’s going to be a monster,” he said. “Way better than me, and he’s already there so there’s only up from here. The sky’s the limit.”

“He has a lot of talent and he’s just getting his feet wet,” he added. “It’s getting him in there in situations where he can do good things. We think the world if him and he’s going to be a very good football player for us.”

Mayo threw a nine-yard touchdown pass to James Smith Jr. and Maura finished off the Bulldogs’ scoring when he punched it in from three-yards out with 7:52 to play.

Maura’s TD gave Richards a 25-13 lead, but the Ike offense was quick to answer, requiring only 1:01 to close it to 25-20. Then the Cardinals defense stepped up, forcing the Bulldogs to punt and getting the ball back with 4:16 to go. One play later, Eskridge stepped in front of an Eisenhower receiver to thwart that drive and put the game in the hands of the Richards offense.