Last Friday I stopped off at the Southwest Regional Senior Center, 6117 S. Kedzie, which was holding a health fair, which they do periodically.

Lots of tables were set up, sponsored by local health care organizations and government offices. Folks were taking advantage of the opportunity to learn more about the programs and benefits available to them. In addition to the welcome information, there were lots of freebies handed out. Folks were leaving with bags of goodies. Of course, there was food.

The luncheon was important as it marked the return of the Golden Diners Program, if only for one day. Box lunches with sandwiches will continue to be available for the rest of September as they have been throughout the pandemic years. But it appears it won’t be long before the Golden Diner luncheons return.

Based on the attendance, I would say lots of people are sure glad the Center is getting back to its former self with regular programing. The parking lot was full to the brim, as were the streets in the surrounding area.

In addition to the daily fitness programs, movies and games, here’s a couple of special upcoming events: This Friday, Sept. 16, is a Mexican Independence Day celebration featuring food, music and dancing at 10:30 a.m.

Then on Saturday, Sept. 24, the book club–a collaboration between the Chicago Public Library and the Center, will discuss The Four Winds by Kristin Hannah. Copies of the book are available at the Chicago Lawn Branch Library, 6120 S. Kedzie. Book club meetings are held via Zoom or phone. Register in advance by emailing [email protected] or calling (312) 747-0639.

At the Chicago Lawn Library, Family Cinema is screening the 2016 Lions Gate film Middle School: The Worst Years of My Life on Saturday, Sept. 17 at 2:30 p.m.

This Sunday, Sept. 18, Nativity BVM Parish will celebrate its 95th anniversary with a Mass of Thanksgiving at 11 a.m. The celebrant will be Bishop Rimantas Norvila.

If you were a member of the 1987 graduating class of Bogan High School, a reunion/Christmas party is being planned for Saturday, Dec. 10. The place and time will be announced soon.

Last week in our trip back to the 1940s and 1950s, we were going to stop for perhaps an ice cream soda or sundae to finish off the summer. There were two places we were deciding on. Joan M. was the first to guess a popular stop on 63rd Street just east of Kedzie by the Marquette Theater: Cupid Candies. While Joan said she has great memories of going to Cupid, she remembers it in the 1970s, which is when I remember going there. It was a nice date night for young couples, a movie and ice cream. I looked up some advertised specials at Cupid and in the late 1940s, the summer special was a cantaloupe sundae featuring vanilla ice cream surrounded by fresh cantaloupe and topped with whipped cream and the traditional cherry.

Our other option was on the southeast corner of 63rd and St. Louis: the soda fountain in B.J. Glidewell’s drugstore. The reason we were thinking about stopping here was that Camille S. had fond memories of grape fountain soda and she said Glidewell’s was the only place she ever knew that served it.

Forty-four years ago this month, Ernie Banks was visiting the area making a personal appearance at the Jewel Grand Bazaar to sign autographs. Lucky shoppers could win tickets to Cubs game and Cubs t-shirts. Remember when sports figures would make appearances at stores back then? I remember seeing Glenn Beckert (he was my favorite Cub) at the grand opening of Home Depot on Cicero and Dennis Hull at Toys ‘R’ Us.

This week in 1978, a gala 20th anniversary celebration was taking place at a favorite Italian restaurant here on 63rd Street. We should go check it out, right? Where do you think we are going? (Hint: If you ordered from this restaurant very often you will recognize the phone number 476-5233.) 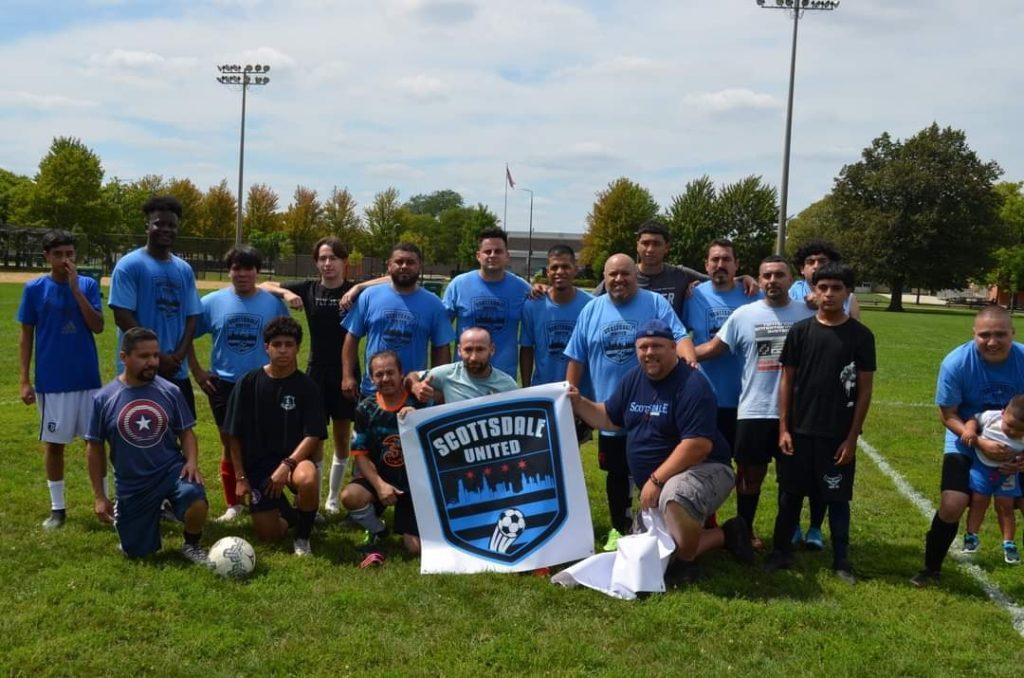