A year ago, crowds of Mexican Independence Day revelers trashed Pulaski Road—mostly between the Stevenson Expressway and Archer Avenue.

In 2022, the partiers were back, but this time they appeared to be met by a more robust and coordinated police response—much to the satisfaction of law-abiding holiday revelers and neighbors in Archer Heights. 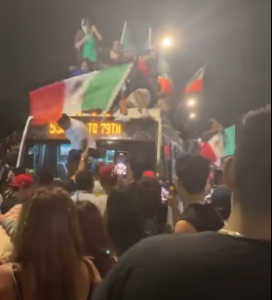 Mexican Independence Day revelers climb atop a southbound CTA bus on Pulaski, similar to what was done in 2021. But police this year appeared to respond more quickly and in greater numbers to lawlessness. –Supplied photo

“I’m proud of my heritage, and I’m all for celebrating; but a lot of these young people take it too far and get out of hand,” West Elsdon resident Urany Martinez said earlier this week. “I’m glad the police were out in force this year, at least more than last year. We need to keep our celebrations focused on the positive.”

The worst, this year and in 2021, appeared to involve mostly young men racing cars up and down the street and in nearby parking lots, until traffic became so clogged that Pulaski itself resembled a parking lot.

Revelers honked their vehicles’ horns and waved outsized Mexican flags. A number got out and walked up and down the street and adjacent sidewalks.

That spilled over into nearby sidestreets.

Last year, Chicago Police Zone 6 radio was crackling with officers on the scene describing the situation and hurriedly requesting backups, which were brought in from two nearby districts to help Chicago Lawn (8th) District police. There were reports of lit fireworks being thrown into groups of people, shots fired from revelers’ guns, and beer bottles thrown at police. 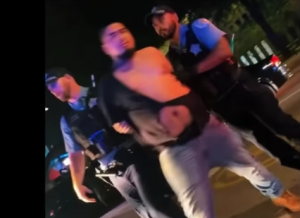 Police cuff and lead away a man who appeared to have refused to exit his vehicle and was removed by force, near Archer and Pulaski. –Supplied photo

This year, as firsthand accounts and cellphone video footage posted to social media appear to indicate, police were more effective. In one video, a man refusing a police order to get out of his vehicle was swarmed by at least six officers, who forcibly removed him and arrested him quickly.

“Damn, he bogus as hell for that,” a man taking a cellphone video is heard to say about arresting officers near Archer and Pulaski. “There was no need for that, bro. F~cking goofy-ass niggas, shorty. Look at that motherf~cking dude right there, that white [police officer]. I got you on tape, bro.”

“Good!” wrote Sebastian Mondalvo. “Much respect to the police for cracking down on these drivers who clogged our streets. A lot of these guys driving SUVs are drunk or high or both. They need to get off the road before they hurt someone. I’m glad the police did that.”

As was the case in 2021, a considerable amount of holiday-related litter was seen along Pulaski and (to a lesser extent) Cicero–like broken beer bottles, plastic cups, food wrappers and even a Mexican flag lying on the street.

A few vulgar slurs were painted on business walls, like “Viva México, putos!” on the sides of the ALDI at 4501 S. Pulaski, and Nicky’s Hot Dogs, 4601 S. Pulaski, and “F~ck CPD” on the
side of Popeye’s Louisiana Kitchen in Vittum Park, 5050 S. Cicero.

Each was reported promptly to authorities by the Archer Heights Civic Association for removal by city government crews.

AHCA President Thomas S. Baliga said this year’s police response appeared to be better planned and coordinated than last year’s, and he said he was especially grateful to see police keep revelers from spilling over into the community’s quiet residential sidestreets.

But he added he thought police “were not aggressive enough” in preventing motorists from clogging Pulaski and doing car stunts at intersections.

Police statistics illustrate their assertive approach. From Thursday through Saturday, there were
19 arrests, 33 impounded vehicles, eight (non-impound) towed vehicles, 72 moving violations, 298 parking violations, eight administrative notices (ticket arrest) and 10 firearms recovered. These are directly related to the nighttime celebrations in Pulaski and Archer corridor and are a huge increase over a typical Thursday through Saturday.

Brighton Park resident Lalo Becerra, who witnessed celebrations along Pulaski this year and last, said of this year’s police response, “Now that’s more like it, “he said. “Last year, it looked like police were scrambling, like maybe there was not enough planning from police headquarters. This year, you got the sense that there were planning meetings behind the scenes, because police were there in force, and they appeared to know exactly where to choke off the bad actors. And that was great because it let the majority celebrate the way we should: loud and crazy, but within the law.”

Ester Moreno-Sanchez wondered if perhaps staging a Mexican Independence Day parade in Archer Heights would solve a lot of these problems. “Maybe this time next year, if we have new political leadership around here, we can get a parade going. “Let people celebrate during the day, and maybe there would be a lot less craziness at night.”