Lyons’ James Georgelos goes in for a tackle of York’s Brian Filosa. Photo by Steve Metsch

Lyons’ bid for a fifth win and to essentially clinch a playoff spot was put on hold by York and junior running back Jake Melion.

Melion, thrust into the RB1 role because of an injury to starter Kelly Watson, ran for three touchdowns in a 27-14 win for the Dukes.

“When you have a lot of success — you don’t want to lose — but it can motivate your team to not be in the situation again,” he said.

Melion ran 24 times, including six carries during an 80-yard, 11-play drive to sew up the West Suburban Conference victory. A big play in that drive was when York (5-0, 3-0) senior quarterback Matt Vezza hit junior receiver Luke Mailander for 44-yards on third-and-19 from the Dukes’ 11-yard line.

“There were a lot of things we didn’t do so well. We kind of shot ourselves in the foot,” Beutjer said.

Nonetheless, the Lions (4-1, 2-1) did have York on the ropes twice in the second half after their offense did zilch with four possessions in the first 24 minutes. 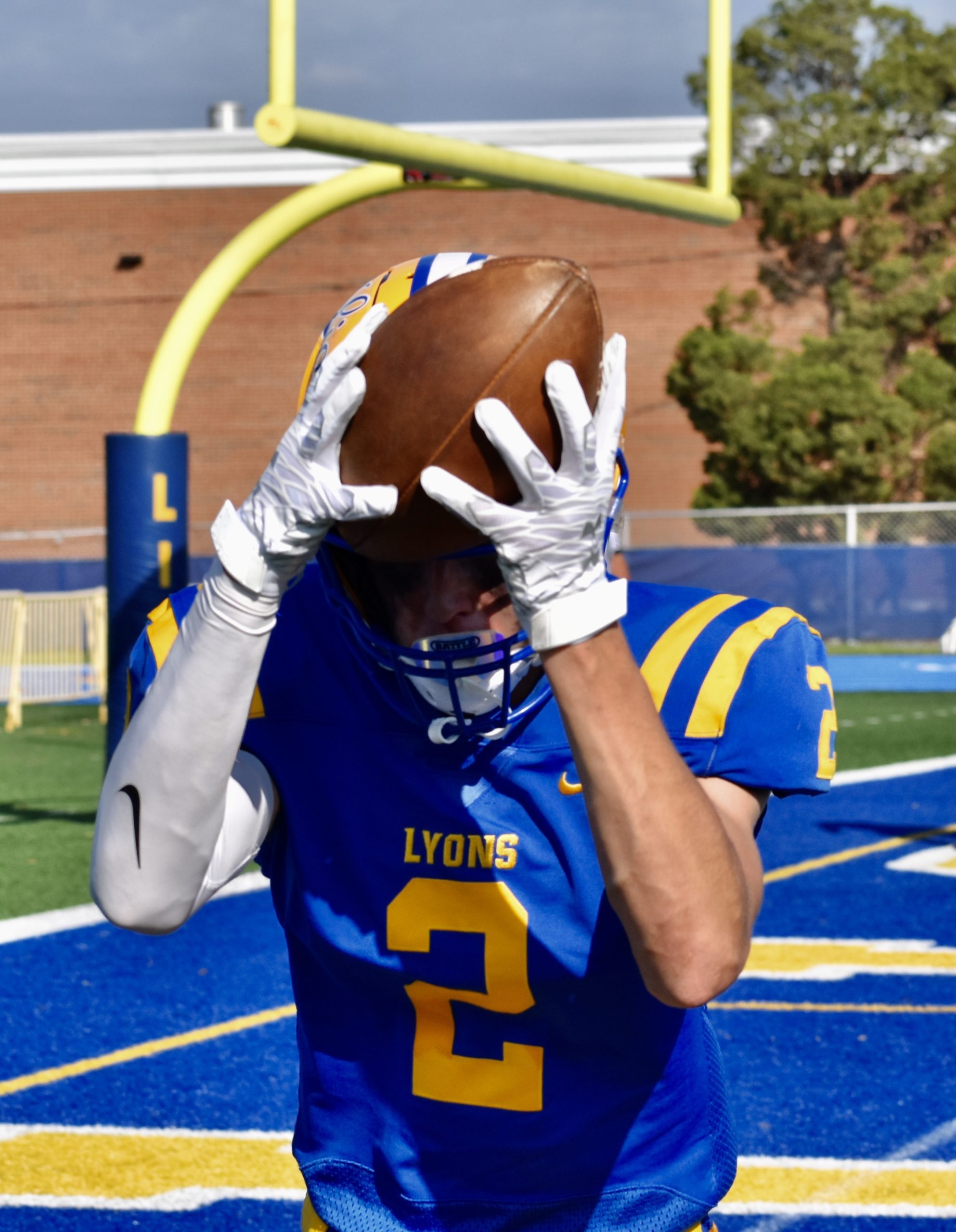 Lyons receiver Travis Stamm hauls in a touchdown pass during a 27-14 loss to York on Sept. 24. Photo by Steve Metsch

Adjustments had the Lions more aggressive in the passing game, Beutjer said.

“We have some very good skill receivers and our quarterback is very good,” he added. “Sometimes you have a plan going into a game and sometimes it doesn’t always work. And you have to go to Plan B.”

Lyons opened the second half with a drive of 80 yards that ended when junior quarterback Ryan Jackson ran for a 10-yard score. Senior David Waight’s point after cut York’s lead to 12-7.

After the teams traded possessions, it was time for Melion to do his thing, bursting through the line and dashing left for a 23-yard touchdown with 14 seconds left in the third quarter for a 19-7 lead.

Jackson found sophomore wide receiver Travis Stamm on pass plays of nine and 28 yards to put the ball at York’s 48.

On first-and-10 at York’s 24, Jackson threw a laser to senior tight end Graham Smith to put the ball at York’s 3.

After a sack, Jackson hit Stamm for a 5-yard touchdown pass cutting York’s lead to 19-14.

But Melion sealed the Lions’ fate with a 14-yard run for the game’s final touchdown.