Skip to content
September 27, 2022/Comments Off on Football: Richards scores season-high 49 in win over Shepard

Richards sophomore running back Miles Mitchell (5) ran for 142 yards and scored four touchdowns in a 49-36 win over Shepard on Sept. 23 in Palos Heights. Photo by Jason Maholy

It took all of 16 seconds for the fireworks to begin in a high-scoring South Suburban Red matchup between district rivals Richards and Shepard.

Terangie Eskridge returned the opening kickoff for a touchdown, Myles Mitchell scored four touchdowns and the Bulldogs pulled away in the second half to top the Astros, 49-36, for its third consecutive victory.

Richards got off to a slow start this season, getting outscored 79-8 in losses to Morgan Park and Marist in their first two games. There is still work to do on both sides of the ball — the Bulldogs’ defense has allowed 142 points in five games — but an offense with a wealth of playmakers appears to be finding its groove.

The game was a back-and-forth affair in the first half, with the teams trading the first six touchdowns. Richards had the final word in the second quarter, scoring on a Joe Mayo-to-James Smith 50-yard touchdown pass to take a 28-18 lead into halftime, then increased its lead on a 2-yard run by Mitchell with 8:51 to play in the third quarter.

Mitchell, a sophomore running back, carried the ball 25 times for 142 yards and three touchdowns and added a 21-yard catch for a score. Mitchell saw an increase in his workload because of an injury to senior running back Michael Maura.

“In the beginning of the season I was getting my feet wet,” Mitchell said. “Now, I’m more comfortable in the offense.

“It feels great to get the ball a lot. The coaches had a great game plan this week, the O-line blocked great and it was just a great offensive effort.” 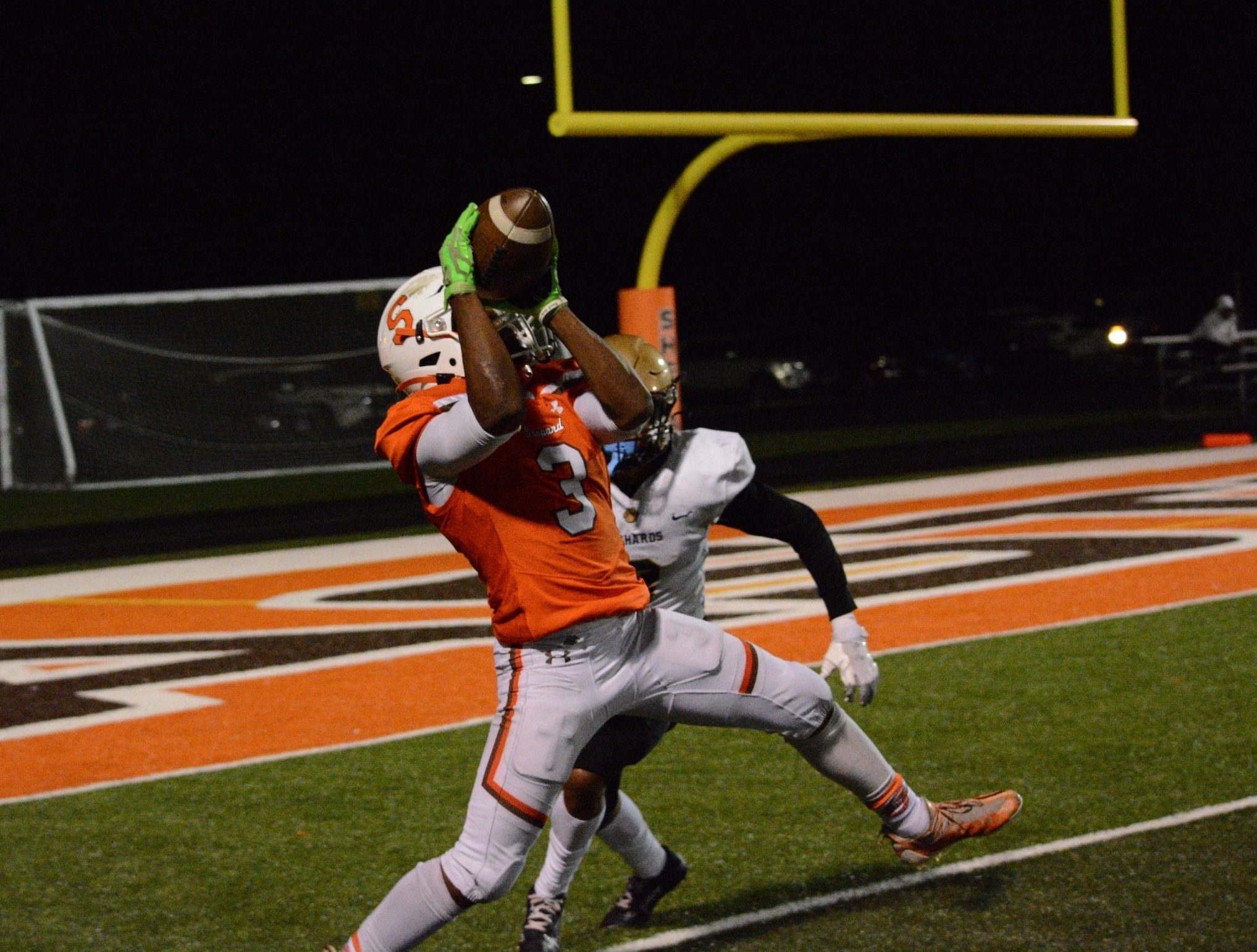 Shepard senior wide receiver Elijah Tyson comes down with a catch during the Astros’ loss to Richards on Sept. 23. Photo by Jason Maholy

Mitchell’s touchdown catch came from wide receiver Donnie Burton, who took a pitch from quarterback Joe Mayo and launched a perfectly placed pass across the grain to the sophomore back, who was streaking down the left sideline.

Burton, a senior who sustained a season-ending leg injury in Week 4 last year, also caught a 10-yard touchdown pass from Mayo. He acknowledged he is still working his way back from the injury and said the Bulldogs’ offense will only get better moving forward.

“I’m feeling good now, trying to ease back in,” he said. “Our offense is nice. We’ve got a lot of weapons. You can’t stack the box and you can’t cover us one-on-one.”

Mayo, a senior, threw for 126 yards and two scores.

The Astros rushed for 243 yards and outgained the Bulldogs, 366 to 347. They were led by senior running back Xavier Rogers, who scored on runs of 25 and 7 yards.

Lascola was forced into duty after starting quarterback Quran McClellan sustained what appeared to be a serious injury to his right leg. McClellan, a senior, was carted off the field in the third quarter.

Lascola’s first touchdown, an 8-yard pass to senior wide receiver Damarrius Hodges, brought the Astros to within 11 points with 8:03 to go in the third quarter and provided some hope for a comeback. Shepard forced Richards to punt on the visitor’s ensuing possession, but the Bulldogs recovered a Lascola fumble and scored one play later on the Burton-to-Mitchell pass to open up a 42-24 lead. 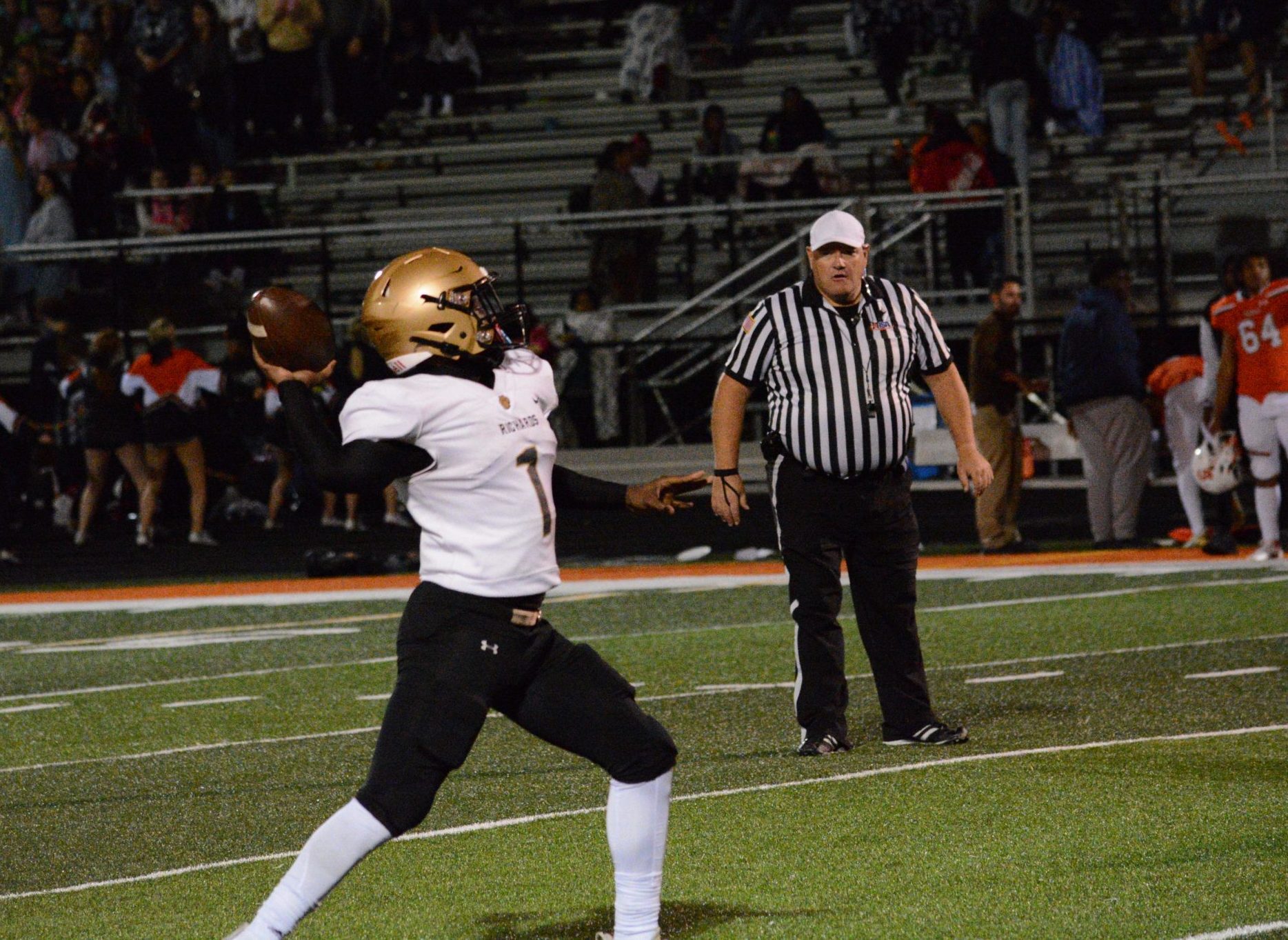 Richards wide receiver Donnie Burton reaches back before tossing a 21-yard touchdown pass during the Bulldogs’ 49-36 win over Shepard on Sept. 23. Photo by Jason Maholy