Skip to content
September 29, 2022/Comments Off on Church luncheon thanks and salutes U.S. veterans

Veterans from all walks of life can use some assistance in receiving the benefits they deserve.

Carlo Melone, senior national service officer for the Disabled American Veterans, said that servicemen and women are entitled to certain benefits that were not available to them in the recent past.

Melone was the guest speaker at the sixth annual Veterans Thank You Luncheon held Saturday at the St. Paul Lutheran Church Fellowship Hall in Oak Lawn. 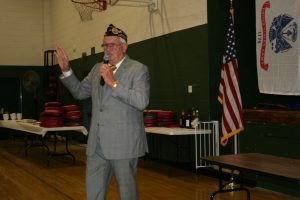 Oak Lawn Mayor Terry Vorderer, an Army veteran of the Vietnam War, spoke about how proud he was to serve during the Veterans Thank You Luncheon on Saturday.

“I had to fight for my VA claims,” said Melone, a U.S. Marine veteran. “So now, nothing is more rewarding than changing the lives of my brothers and sisters in the military.”

Melone talked about a chance encounter with a fellow Marine veteran at a pharmacy on Chicago’s Southwest Side. Melone knew he was a Marine veteran by the hat and patches on his jacket. He called out to him and they talked for a few minutes.

Jose Rosales had dropped out of high school at age 17 to join the Marine Corps. He was soon deployed to Vietnam as a military policeman. Melone said that Rosales told him he was discharged without any specific incidents but later recalled Agent Orange falling to the ground from planes overhead while he was in Vietnam.

In 1978, doctors diagnosed Rosales with Type 2 diabetes. They never linked his diabetes back then to Agent Orange.

But Melone pointed out that doctors now should know that Type 2 diabetes is often a result of Agent Orange that many Vietnam vets were victims of. Rosales was one of them.

“He had to pay over $300 a month for insulin and most of it was out of his own pocket,” Melone said.

His treatments over the next 40 years were only partially covered by insurance, Melone said. No one had told him since 2001 the Department of Veterans Affairs recognized the connection between Agent Orange and Type 2 diabetes. But he learned that by his meeting with Melone at the pharmacy in 2019. 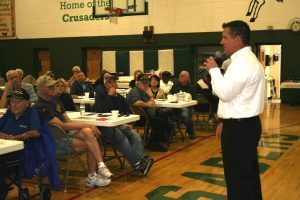 After conversing with Melone, Rosales made his first claims that were delayed due to the height of the pandemic. After much persistence, Rosales was able to receive medication and not pay out of his pocket. He was also able to pay for his wife’s cancer treatments.

His wife later died but Melone was able to fix errors that were costing Rosales thousands of dollars. Rosales now takes his daily insulin and lives a life in which he plays softball, bowls and is often on the golf course. But Rosales no longer has the financial burdens he had in the past.

“For the last 12 years, I have changed the lives of men and women in all branches of the service,” Melone said. “It is a great feeling to do that.”

Melone said that two bills have passed during the last two administrations that aid veterans.

The PACT Act was signed into law last month by President Joe Biden.

The new law that expands VA health care and benefits for veterans exposed to burn pits and other toxic substances, including Agent Orange.

Melone told the veterans who attended the luncheon that if they have any questions to call his Chicago office at 312-980-4242.

The annual luncheon is organized by Rich Przybycien, a longtime church elder and musician at St. Paul Church. Przybycien played “Taps” to honor active, retired and deceased U.S. veterans during a solemn moment at the event.

“I really appreciate everyone who came out,” Przybycien said. “It doesn’t matter what you did; whether you were a cook or served here or overseas. We honor your service.”

Sandy Barry is a longtime church administrative assistant at St. Paul. Her daughter, Mandy Barry, noted that her mother was also an entertainer who performed for over 15 years in the Chicago area.

The Barrys performed as The ByGone Gals during the luncheon, singing a variety of songs linked to World War II and the 1940s. Some of the songs they performed included “Sentimental Journey,” “In the Mood” and “Boogie Woogie Bugle Boy.”

Sandy Barry became emotional when she referred to her father and Mandy’s grandfather, who died last year. He was a veteran who was proud to serve his country, Sandy Barry said.

“My father told me before he died, you know Sandy, we have to help teach the history of the veterans to the younger generations,” she said. “If we don’t, no one will know or care about them. We have to teach them.”

Przybycien later introduced Robert Klaviter, a Navy veteran who served in the Korean War. Klaviter, who was celebrating his 90th birthday, received a lengthy applause along with a chorus of “Happy Birthday.”

The presentation of colors was given by the Johnson-Phelps VFW Post 5220 Color Guard. Oak Lawn Mayor Terry Vorderer, who is a Vietnam War Army veteran, spoke at the event.

“I wear many hats in this village but I was most proud of serving this country,” Vorderer said.

St. Paul Pastor John Moeller thanked Przybycien for organizing the event and all the volunteers who assisted. The Rev. Mark Duer, the pastor at Trinity Lutheran Church in Willow Springs, gave the blessing and closing prayer. Duer is an Army veteran of Desert Storm.

“God bless all of you and God bless America,” Przybycien said at the conclusion of the luncheon. 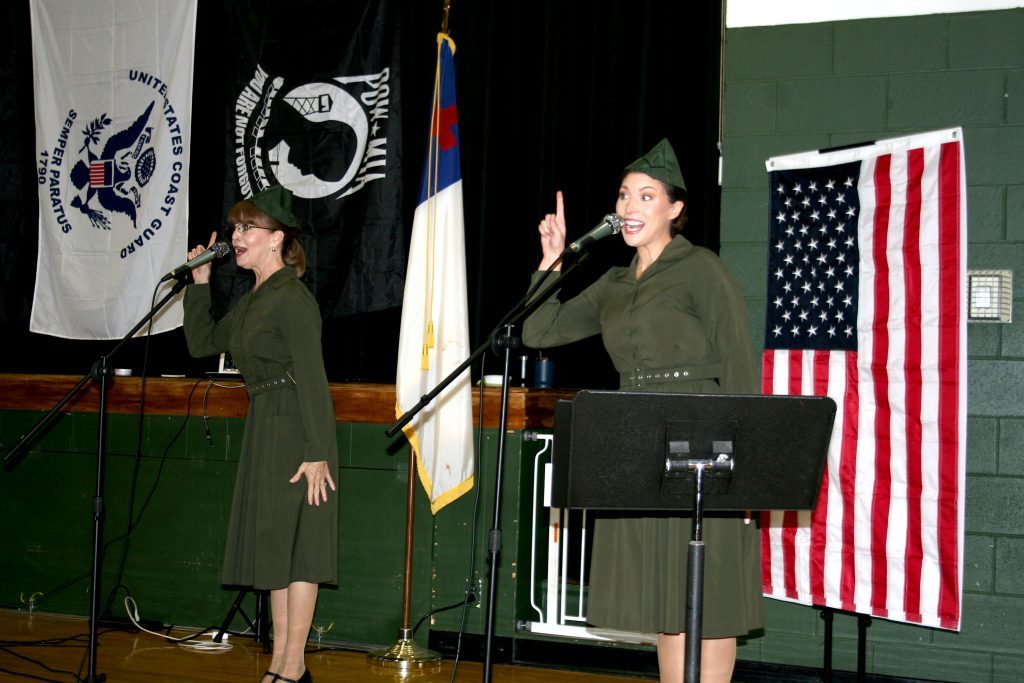 Sandy Barry (from left) and her daughter, Mandy Barry, perform as The Bygone Gals during the sixth annual Veterans Thank You Luncheon at St. Paul Lutheran Church Friendship Hall in Oak Lawn on Saturday.