Three aldermen (from left)--Raymond Lopez, Silvana Tabares and Anthony Napolitano—stand alone in City Council last week, as their resolution to hold a hearing on the SAFE-T Act failed to muster any votes other than their own. --Supplied photo

Two Southwest Side aldermen are threatening to defy their City Council colleagues and hold hearings on the impact of the state’s controversial SAFE-T Act on criminal justice.

Among other things, the resolution states that the new law “may release violent, repeat offenders” onto the streets.

“Unfortunately, socialist aldermen pushed to silence debate; but worse, moderate aldermen remained silent on the issue,” she said. “If you think public safety is at least worth a discussion in this city, please call your alderman and ask them to support hearings on the city’s plan for the SAFE-T Act.” 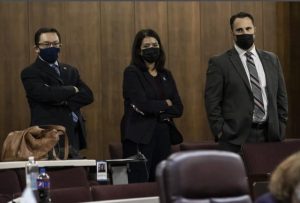 Three aldermen (from left)–Raymond Lopez, Silvana Tabares and Anthony Napolitano—stand alone in City Council last week, as their resolution to hold a hearing on the SAFE-T Act failed to muster any votes other than their own. –Supplied photo

Lopez said he wants “answers regarding the SAFE-T Act. If City Council won’t hold hearings, we will hold them ourselves, inviting its sponsors to explain its potential impact on Chicago.”

Whether the aldermen make good on their vow or whether their words are not much more than political grandstanding—as one alderman said in confidence to the Greater Southwest News-Herald—remains to be seen.

The Safety, Accountability, Fairness and Equity-Today Act, known as the SAFE-T Act, passed with the backing of the Illinois Legislative Black Caucus in the early hours of Jan. 13, 2021.

Since its passage, the measure has been amended twice to accommodate concerns of law enforcement groups, pushing back certain effective dates and changing some of the initial use-of-force language.

Proponents say the reform is a step toward making the justice system equitable for black, Latino and other minority communities.

One of the more controversial provisions of the bill abolishes cash bail in Illinois and replaces it with a system that will prioritize the severity of an offense, the risk of not appearing for court and the threat and danger the individual poses to another person or the community if they were to be released.

The provision does not go into effect until Jan. 1, 2023, but opponents claim it will allow “dangerous and violent criminals” back on the street, tying the hands of prosecutors who seek to keep the accused individuals incarcerated before a conviction.

Fraternal Order of Police Lodge 7 President John Catanzara, a Southwest Sider, has dubbed it the Anything But Safety Act. He has said the legislation “been a nightmare from the start, and all it has done is give the criminals the keys to the kingdom.”

In an election season, Republicans have used the SAFE-T Act to portray Democrats as soft on crime.

But some Democrats, including Cook County Board President Toni Preckwinkle, have pushed back.

“The recent negative rhetoric that has been circulating about the SAFE-T Act is designed to incite fear for political gain,” she said recently. “Those who attempt to vilify this legislation are proponents of a system and a status quo that has contributed to the racial injustices of mass incarceration and over policing of black and brown communities which has diminished safety, resiliency and trust for many residents. As history has shown us, these practices were unjust, did not contribute to public safety and were not solutions to crime.”

Long an opponent of cash bail, Preckwinkle said the SAFE-T Act “represents an important step towards protecting our communities, guaranteeing justice in our legal system, and addressing decades of harm to our black and brown communities. We must work to ensure the system lives up to its commitment to protect and serve all residents regardless of income or race. Thoughtful criminal justice reform that is responsive to data, research and the needs of our communities is vital to maintaining a justice system that is fair and serves the needs of the people. The SAFE-T Act and the Pretrial Fairness Act were thoughtfully drafted to prioritize safety for victims, defendants and communities.”