Skip to content
October 12, 2022/Comments Off on Evergreen Park runs for 330 yards in win over Shepard 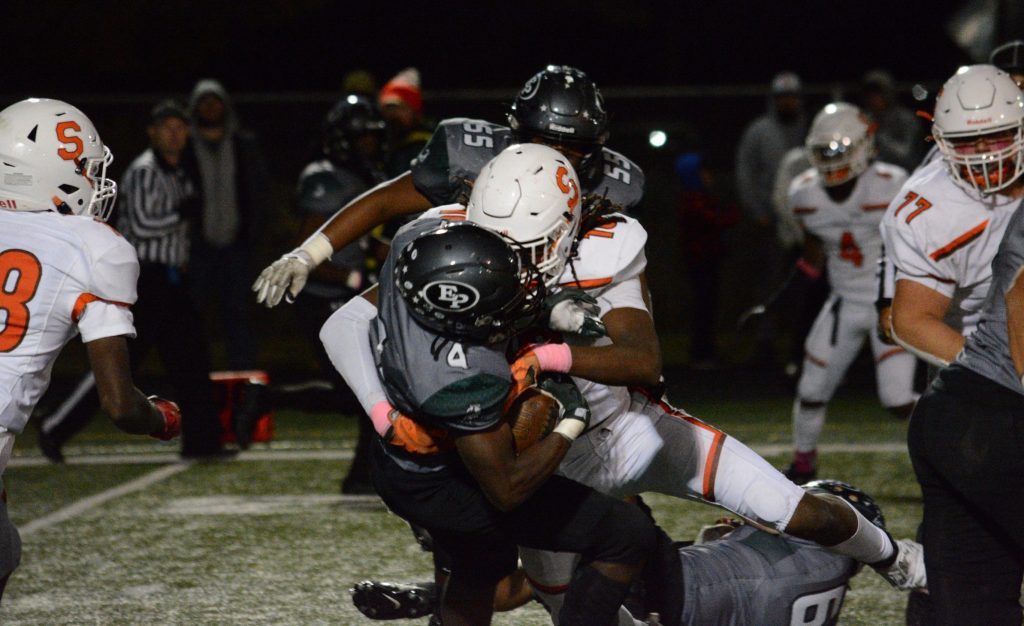 Evergreen Park runs for 330 yards in win over Shepard

Losing to T.F. South in Week 6 did not sit well with Evergreen Park’s players.

The Mustangs entered that contest with the chance to gain playoff eligibility with a win, but played their worst game of the season in an 18-7 loss to the struggling Red Wolves.

They were determined to bounce back, but up next was a battle with South Suburban Red rival Shepard, which Evergreen Park had not beaten since 2014.

In a dominant performance, the Mustangs ran for 330 yards, forced three turnovers and topped the Astros, 41-14, on Homecoming in Evergreen Park. They improved to 5-2, 3-2 in the SSC Red, and likely earned a spot on the postseason.

Leading the way was junior quarterback Deijon Feliciano, who Verde said played the best game of his life. Feliciano ran for 142 yards and two touchdowns while completing 10-of-16 passes for 160 yards and three scores. 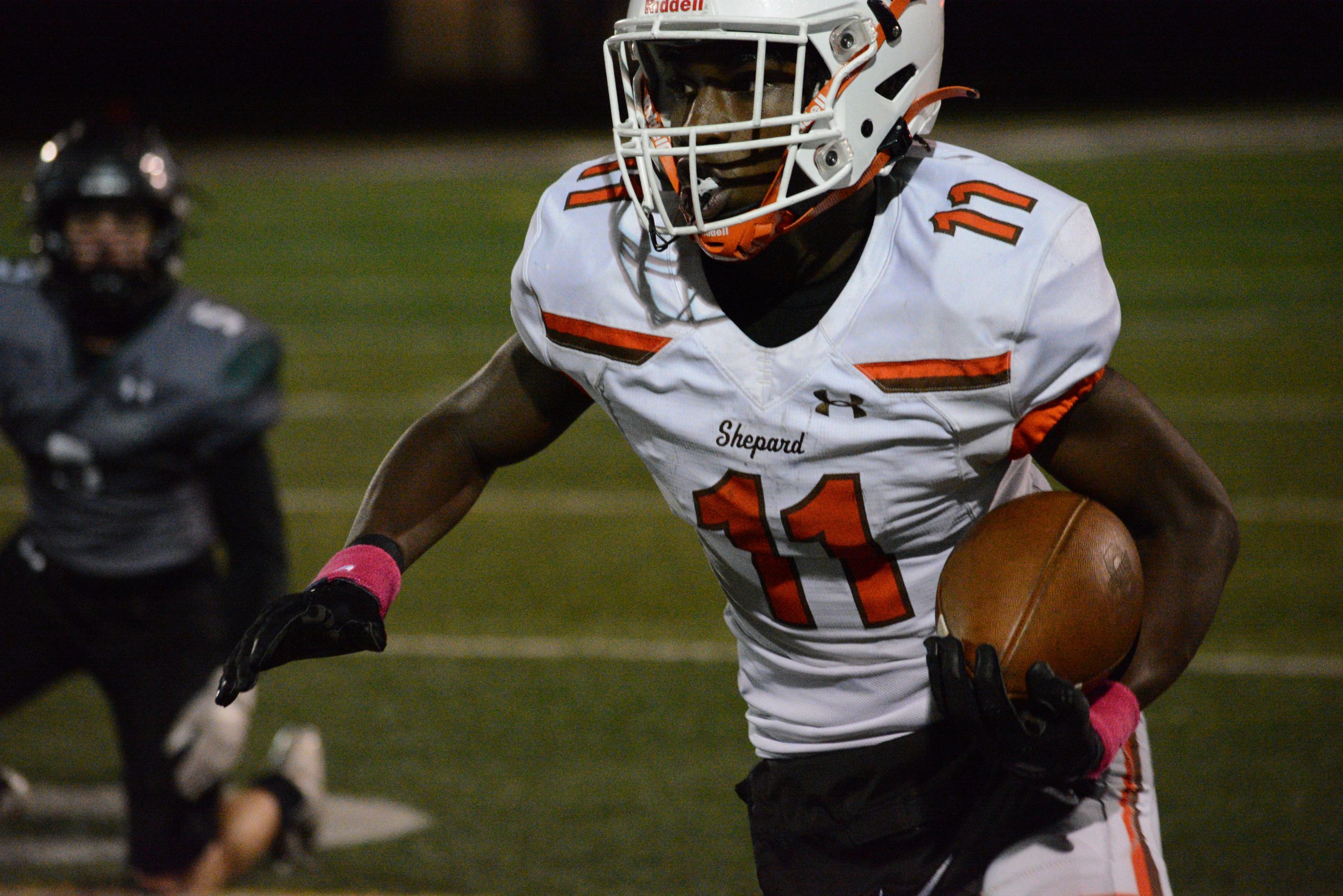 Junior running backs Antonio Clay-Jones and Jedidiah Adjayi had 17 carries for 101 yards one touchdown and 12 carries for 87 yards, respectively, running behind an offensive line that had their way with Shepard’s defensive front.

“This week we really keyed in on practicing really hard, keep working,” Feliciano said. “The offense picked up the intensity. It was one of our best practice weeks in a long time and it showed.”

“We’re workhorses. That’s all we do, just work, work, work. If we win or lose or tie, we keep working. So whatever the outcome may be, that’s what it is, but we’re just going to keep working.”

Feliciano was named the starting quarterback last season as a sophomore and has experienced the predictable growing pains that go with that. He has shown flashes of brilliance but has been inconsistent.

Verde was encouraged about what he saw from his signal-caller, and the team as a whole coming off a disappointing defeat.

“He played tonight,” Verde said of Feliciano. “He got in his own way at T.F. South, overthought things. As a quarterback, if you’re thinking instead of playing you put yourself in bad situations. Tonight he made his reads and he played, and it was evident how comfortable he was and how locked in he was. He was making the right decisions all night long.” 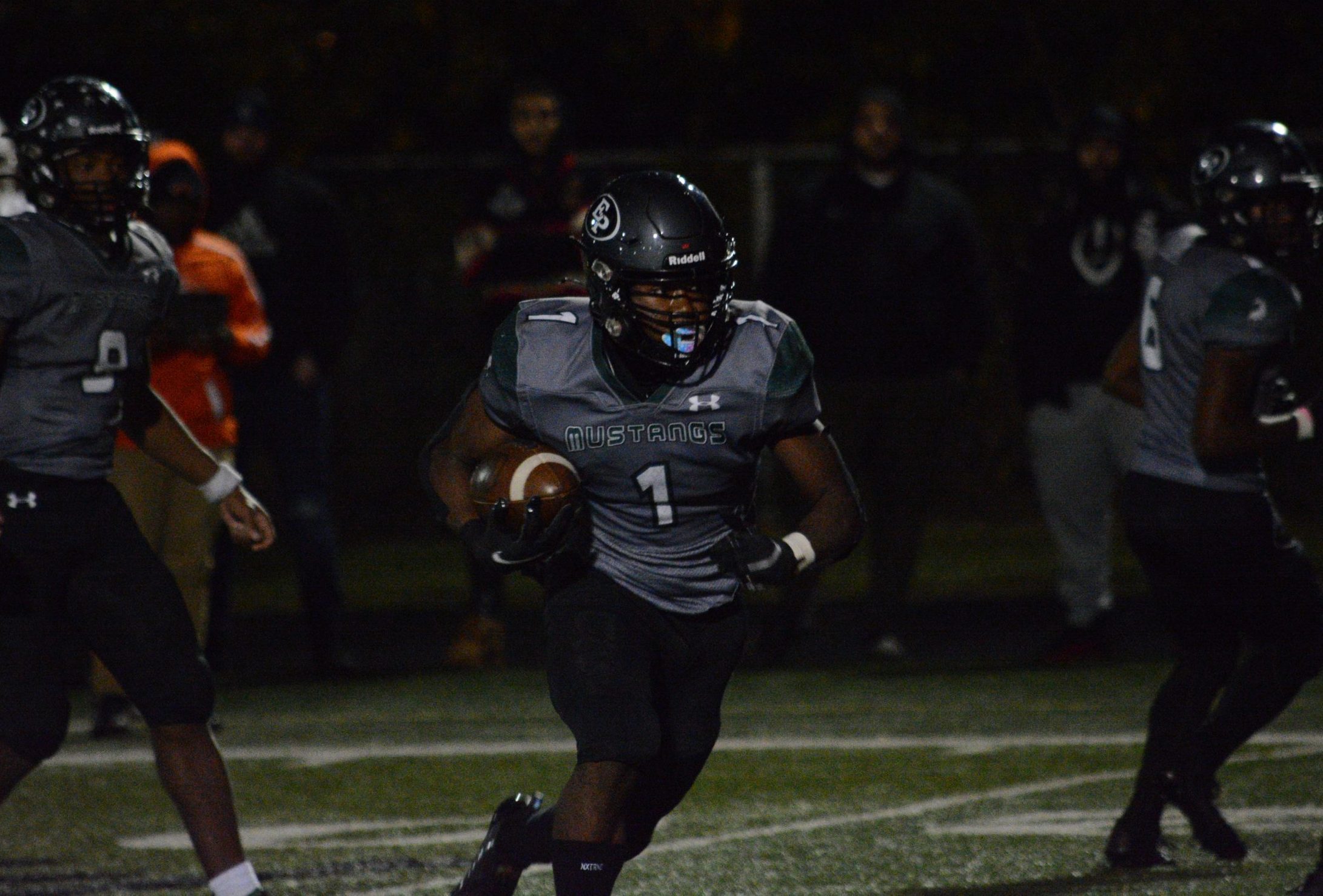 Evergreen Park junior running back Jedediah Adjayi finds room to run for soem of his 87 yards in the Mustangs’ 41-14 win over Shepard.

Verde praised his offensive line, a group that also plays defensive line and which was missing one starter.

“You’ve got to give all the credit in the world to that offensive line, they worked their rear ends off,” he said. “They’re doing it on both sides of the ball and they’re relentless.”

The game was tight in the first half, but the final play of the second quarter proved to be pivotal. After the Mustangs defense stopped the Astros on fourth down and near mid-field with 17 seconds left, Feliciano ran for 18 yards to the Shepard 37-yard line. On the next play he found Measner in the end zone with no time remaining for a touchdown that put Evergreen Park up 20-6 heading into halftime.

Feliciano tossed a touchdown pass to Ke’Shaun Lee on the Evergreen Park’s first possession of the third quarter to extend the lead to 28-6.

Shepard (2-5, 1-3) was with the loss eliminated from playoff contention. The Astros had qualified for the postseason for six consecutive seasons — the past three under coach John Rone — and 10 of the past 12.

Senior wide receiver Elijah Tyson ran for a 37-yard touchdown and scored another on a 43-yard pass from sophomore quarterback James Lascola.

The Astros, who were without starting quarterback Quran McClellan and starting running back Xavier Rogers, turned the ball over three times. McClellan has missed the past two games with a leg injury and Rogers was out for the second time this season.