Skip to content
October 16, 2022/Comments Off on Pigskin Wrap: Brother Rice and Marist ready for Battle of Pulaski 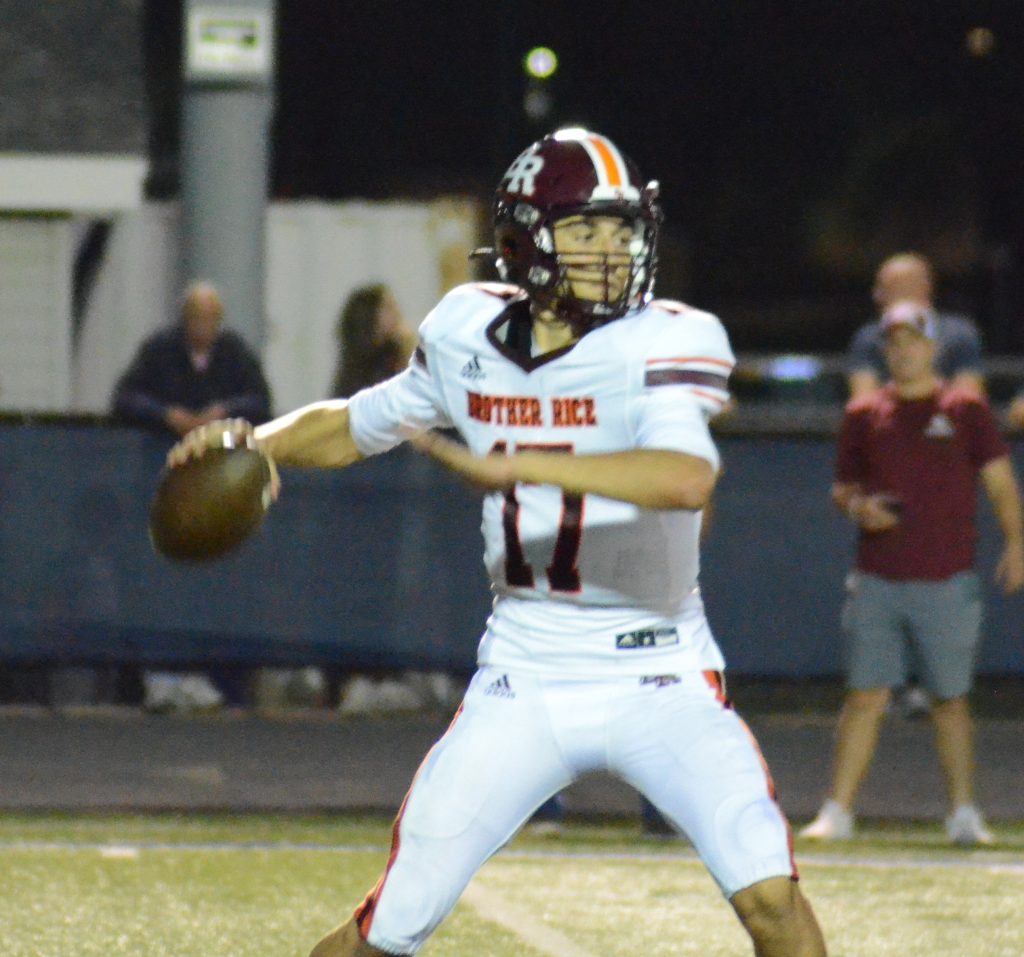 Brother Rice QB Ryan Hartz, shown passing in a game earlier this season, accounted for four touchdowns against Marian Catholic in a game leading up to Friday's showdown with Marist. Photo by Jeff Vorva

The stage is set.

The annual grudge match between neighborhood and conference rivals Marist and Brother Rice takes place at 7 p.m. Friday at Rice.

Both teams are 5-3 overall and 0-2 in the East Suburban Catholic/Chicago Catholic League Blue, with both teams falling to Loyola and Mount Carmel in league pay.

But they are both strong and, judging by the playoff points they have accumulated (opponents’ combined wins) they are almost assured a spot in the postseason, but there is still a lot of meaning to this game. Pride is on the line as well as going into the playoffs with some steam and a higher seed.

Brother Rice, which has a 23-18 lead in the series, comes in with a two-game winning streak including a 42-7 win over Marian Catholic on Oct. 14. Quarterback Ryan Hartz threw for 227 yards and two touchdowns and ran for two scores. Randall Nauden ran for 75 yards in the victory.

Marist also comes in with a two-game winning streak after beating Carmel, 44-30, on Oct. 14. Senior Chris Lofgren ran for 114 yards and two touchdowns. Marc Coy added 42 yards and a pair of scores.

CCL/ESCC
Nazareth dug itself a hole opening the season 1-3, but could climb out of it Friday. The Roadrunners (4-4) beat Montini, 42-7, in a crossover on Oct. 14 and visit Benet (4-4), with the winner earning postseason eligibility and an almost certain playoff berth. With 46 playoff points based on opponents’ wins, the Roadrunners should make the postseason field if they win.

Justin Taylor ran for two touchdowns and caught a pass for another score for in the win over Montini. Sophomore quarterback Logan Malachuk threw for 176 yards and Alexander Angulo ran for 109 yards on 20 carries.

St. Laurence (3-5) lost its chance of making the playoffs after suffering a 28-10 crossover loss to Niles Notre Dame. Harley Rizzs ran for 87 yards, including a 63-yard touchdown run.

De La Salle (1-7) dropped its sixth game in a row, a 40-29 setback to Hope Academy. Kenyonte Louis ran for 110 yards for the Meteors. Angelo Chavarria had a blocked punt return for a touchdown and added a fumble recovery for another score.

High five for SXU
Saint Xavier, ranked 16th in the nation by the NAIA coaches, rung up its fifth straight win on Oct. 15 with a 31-13 victory over Missouri Baptist in the Mid-States Football Association Midwest game at Deaton Field.

Freshman running back Mario Price, who moved from wide receiver after a series of Cougars’ running back injuries, ran for 59 yards and caught four passes for 25 yards including his first college touchdown.

Senior linebacker Joey Markasovic ran an interception back for a touchdown for the Cougars (5-2, 3-0).

South Suburban Red
Richards (5-3, 5-0) clinched at least a share of the league title with a 41-20 victory over crosstown rival Oak Lawn (1-7, 0-6). The Bulldogs have scored 41 or more points in each of their last three Red wins.

Reavis (5-3) is in the playoff picture after a 49-8 crossover victory over winless T.F. North, but needs a win over Richards this week to seal the deal. Should the Rams lose and go 5-4, their criteria of playoff points via opponents wins (currently 30 points) puts them in a currently gray area.

Evergreen Park (6-2, 4-1) sealed a playoff spot with a 33-14 victory over Eisenhower. If the Mustangs can pull off a victory over Argo on Friday, they can put themselves in a good position to host a first-round playoff game.

Metro Suburban Red
The long trip was worth is as Chicago Christian (4-4) kept its playoff hopes alive with a 49-0 non-conference victory over Phelan Leadership Academy (Indianapolis). A win at Ridgewood (5-3) would make the Knights eligible for the playoffs.

Riverside-Brookfield (5-3, 4-1) dropped a 35-14 decision to powerful Wheaton St. Francis, which had beaten Bishop McNamara 83-0 a week before.

West Suburban Conference
Lyons (6-2, 3-2) fell to Glenbard West, 28-20 in the Silver division, while Morton (3-5, 3-2) dropped a 37-14 decision to Downers Grove South in the Gold and has been eliminated from playoff consideration. The Mustangs have never qualified for the IHSA playoffs.

Chicago Public League
Back of the Yards (2-6) closed its shortened eight-game season on a high note, beating DuSable, 26-6, in a crossover game.

Goode (7-1, 6-0) padded its record for a desirable seed in the playoffs with a 38-28 victory over Carver in the Red-Southeast. Goode put itself in a position to host a first-round playoff game.