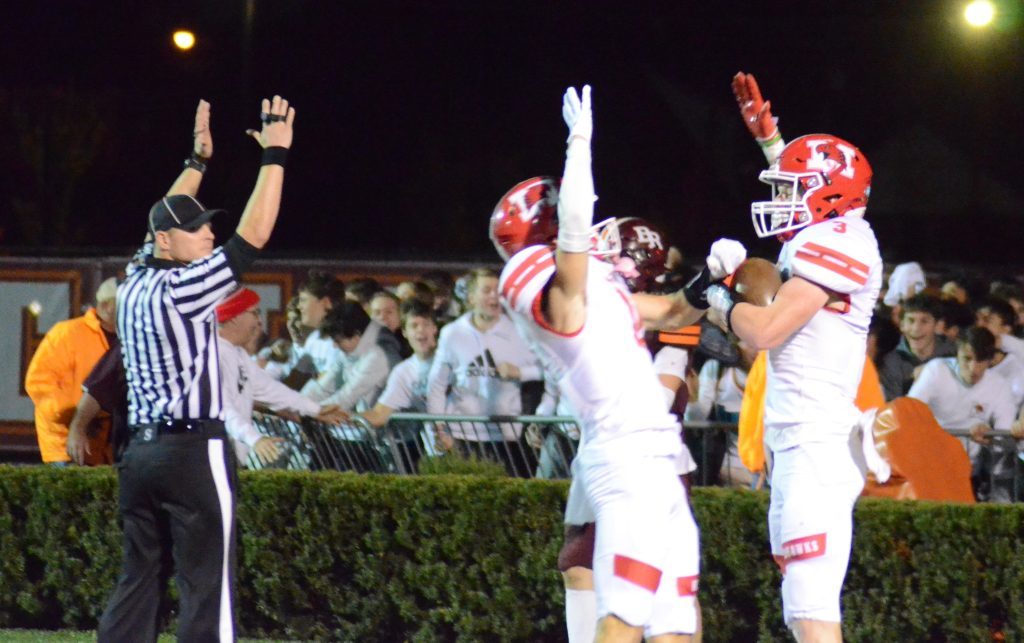 Marist didn’t have too much time to savor its’ come-from-behind rivalry 34-16 win over Brother Rice.

Twenty-fours hours later, the IHSA announced its playoff pairings, with the RedHawks (6-3) drawing the eighth seed and on the road at 15th seeded Naperville North (7-2) at 7 p.m. Friday in the Class 8A bracket.

North finished second in the DuPage Valley Conference and scored a league-high 300 points this season, and has losses to Neuqua Valley and Naperville Central. In an odd wrinkle in the Huskies’ conference schedule, North got a rematch with Central in the final game of the regular season and came up with a 31-3 revenge victory.

Brother Rice (5-4), meanwhile, drew the 24th seed in Class 7A and will visit ninth-seeded Jacobs (8-1) at 7 p.m. Friday in Algonquin. The Crusaders were a semifinalist in the 7A playoffs last year.

Jacobs won the Fox Valley Conference, and its only loss came to Huntley, 37-20. FVC teams do not venture outside their conference.

On Friday at Tom Mitchell Stadium, Brother Rice led 16-7 with 9:37 left in the game, but Marist scored the next 27 points en route to victory in the Chicago Catholic League/East Suburban Catholic Conference Blue matchup. Chris Lofgren scored three times in the second half and finished with 113 yards. Quarterback Dermot Smyth threw for 249 yards and a TD and ran for 33 yards and another score. 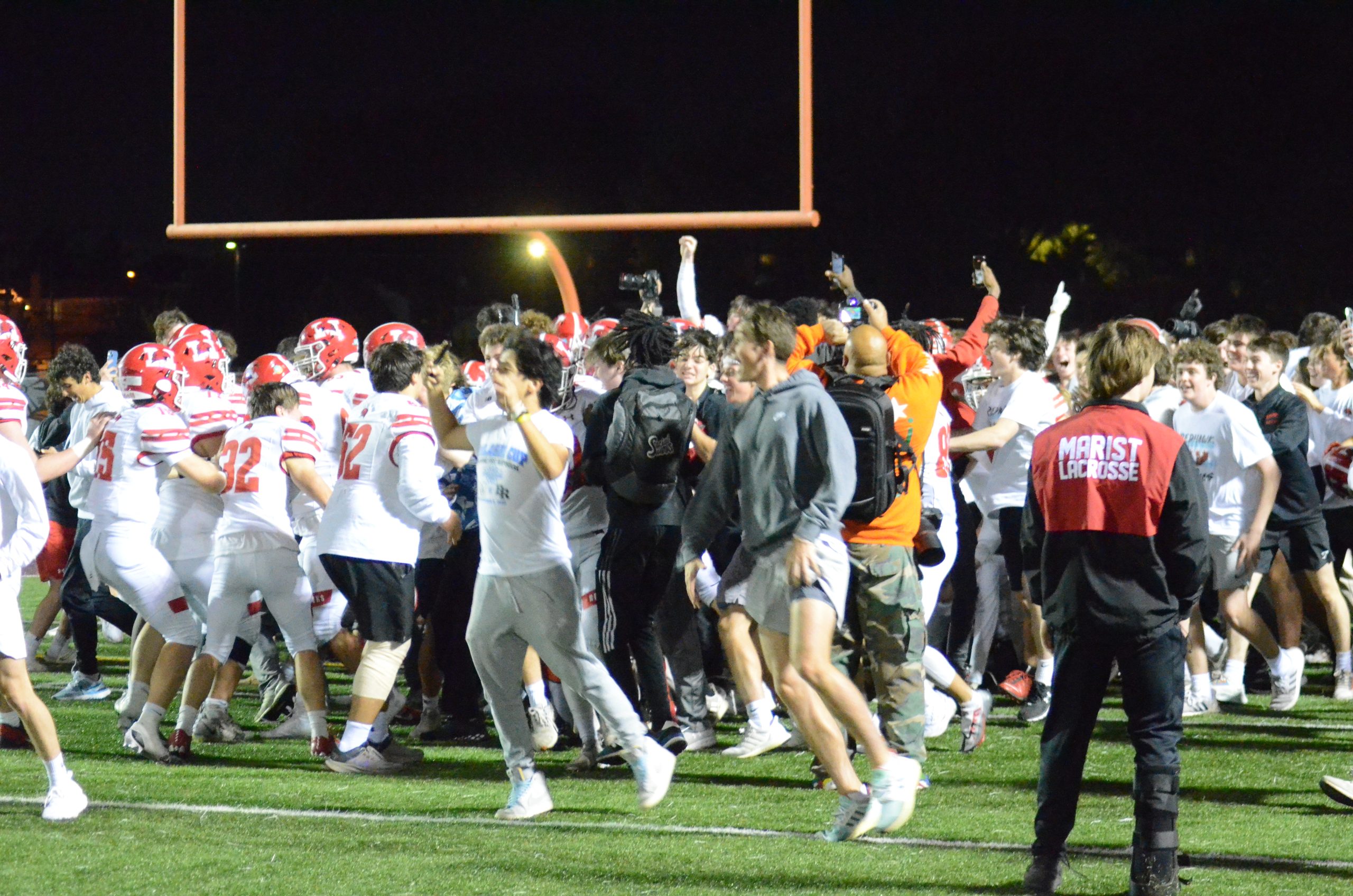 Marist fans celebrate on Brother Rice’s field after the RedHawks beat the Crusaders, 34-16, in the regular-season finale on Oct. 21. Photo by Jeff Vorva

CCL/ESCC
St. Rita (7-2) wrapped up the season with a 30-6 victory over Niles Notre Dame. Mustangs coach Todd Kuska was honored for coaching in his final regular season home game at the school.

The Mustangs, who won their final six games to close the regular season, drew the 12th seed and will host 21st-seed Geneva (6-3) at 7 p.m. Friday.

Geneva finished fourth in the DuKane Conference with losses to St. Charles North, Batavia and defending Class 7A champs Wheaton North. St. Rita finished second in the state in Class 7A last year.

Metro Suburban Red
Riverside-Brookfield (6-3) closed the season by snapping a two-game losing streak with a 42-7 victory at McNamara in Kankakee.

The Bulldogs drew the 10th seed in the North bracket of Class 6A and visit seventh-seeded Kaneland (6-3). The date and time was not determined by this paper’s deadline. Kaneland has a three-game winning streak, outscoring Marengo, Woodstock North and LaSalle Peru by a combined score of 127-16.

Chicago Christian needed a final-week win at Ridgewood and posted its third shutout of the year with a 19-0 victory in Norridge.

The Knights drew the 14th seed in the North Bracket in Class 2A and visits third-seeded Wilmington (8-1) at 6 p.m. Saturday. The Wildcats are the defending Class 2A champs and their only loss was a 50-5 pasting by Reed-Custer, a team that racked up 534 points this season.

West Suburban Conference
Lyons (7-2, 4-2) closed out the Silver season with a 24-13 victory and drew the 14th seed in Class 8A. The Lions will host 19th-seeded Naperville Central (6-3) at 7 p.m. Friday. Central is stinging after a 31-3 regular-season loss to crosstown rival Naperville North. Central’s defense has allowed just 95 points.

Chicago Public League
Catalyst Maria (6-3, 6-1) closed its Red-Central season with a 42-0 win over Noble/Rauner and drew the 10th seed in the North Division of Class 3A and will visit Pecatonica 7-2) at a time and date that were not determined as of deadline.

Goode (8-1) beat Dyett to close the Red-Southeast regular season and drew the fourth seed in the North bracket of Class 5A and hosts 13th-seeded Noble/Pritzker at a time and date not determined by the paper’s deadline. Good has allowed just 89 points this season.

Stagg (2-7) ended the season on a rough note with a 63-6 setback at Bolingbrook. It was the Chargers seventh consecutive loss.

SXU wins sixth straight
In area college football, Saint Xavier, ranked 15th in the nation by NAIA coaches, won its sixth game in a row, a 35-6 triumph over Trinity International in Deerfield on Saturday.

Junior defensive back Ron Carroll returned a pair of interceptions for touchdowns in the rout and is the first Cougar in team history two return two in one game.

On offense, Stuart Ross threw for 249 yards and three touchdowns while Justin Pringle hauled down eight passes for 140 yards.