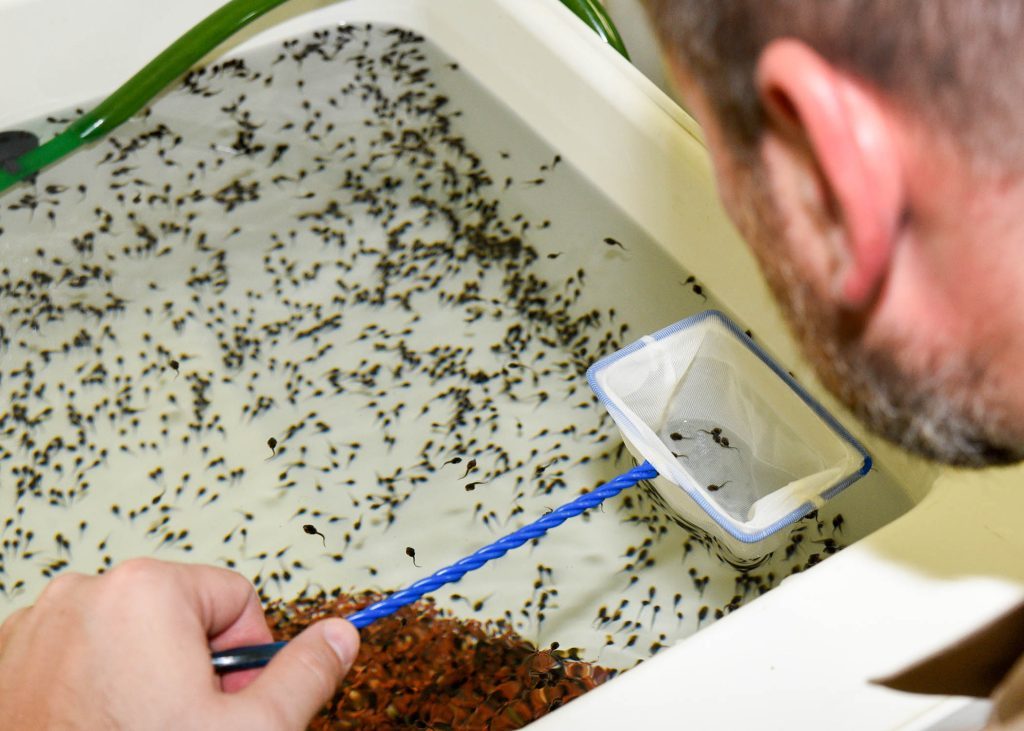 One of several animal care specialists at Brookfield Zoo, painstakingly counts each Puerto Rican crested toad tadpole prior to shipping them to Puerto Rico, where they are being released to the wild as part of a conservation program to repopulate the species in its native habitat. (Photo courtesy of Jim Schulz/CZS-Brookfield Zoo)

In an effort to help increase the wild population of the Puerto Rican crested toad, last week, the Chicago Zoological Society sent just over 8,200 tadpoles that hatched at Brookfield Zoo to be released to the wild in Puerto Rico. The species, which is listed as endangered by the International Union for Conservation of Nature and Natural Resources, is the only toad native to Puerto Rico.

Since 2015, the zoo, which is accredited by the Association of Zoos and Aquariums, has provided nearly 21,000 tadpoles for release to the wild. In 1984, the Puerto Rican crested toad became the first amphibian Species Survival Plan program under the AZA. The program was restructured to the Puerto Rican Crested Toad Conservancy in 2021. The nonprofit is a consortium of zoos, individuals, and organizations working together for the long-term survival of the species in the wild.

Currently, 20 institutions, including Brookfield Zoo, participate in the conservation efforts for the Puerto Rican crested toad, which is the longest-continuously running reintroduction program for any amphibian species. Managed by PRCTC and its partners, the U.S. Fish and Wildlife Service and the Puerto Rico Department of Natural and Environmental Resources, collaborators have collectively released 650,000 tadpoles to Puerto Rico since 1984.

“The time, care, and efforts of our animal care staff to provide the crested toads at Brookfield Zoo a unique habitat suitable to reproduce and help to repopulate the species in its native land is a testament to their dedication,” said Andy Snider, curator of herpetology and aquatics for the Chicago Zoological Society. “We are proud to be able to collaborate in this important conservation effort for a species that was once thought to be extinct.”

Easily identifiable by its distinctive head crest, the toads only breed during cyclonic events, like a hurricane, when major low-pressures systems are present. Brookfield Zoo’s animal care staff created breeding habitats behind the scenes at the Living Coast building to mimic their natural environment, featuring a man-made system that allows for a simulated heavy rain to occur. For several weeks, the temperature in the toads’ habitat is dropped and then raised again over the course of a week to help hormones develop. Female crested toads then lay eggs that appear in long strands, which tadpoles hatch from within a couple of days.

The tadpoles from Brookfield Zoo are being released in Río Encantado, Ciales, located in the central mountain range of Puerto Rico. The species primarily faces threats from rising sea levels, habitat alteration, fragmentation, and the introduction of invasive species in the area.

In Puerto Rico, the tadpoles are acclimated in man-made ponds where they are monitored by the PRDNER, USFWS, and private NGOs until they metamorphose and disperse. Currently, there are six reintroduction sites located in historical habitat and separated from the last remaining wild population in the south. The toads are generally only observed when they congregate during large rain events for breeding, as the species is difficult to monitor due to its fossorial, or burrowing, lifestyle.