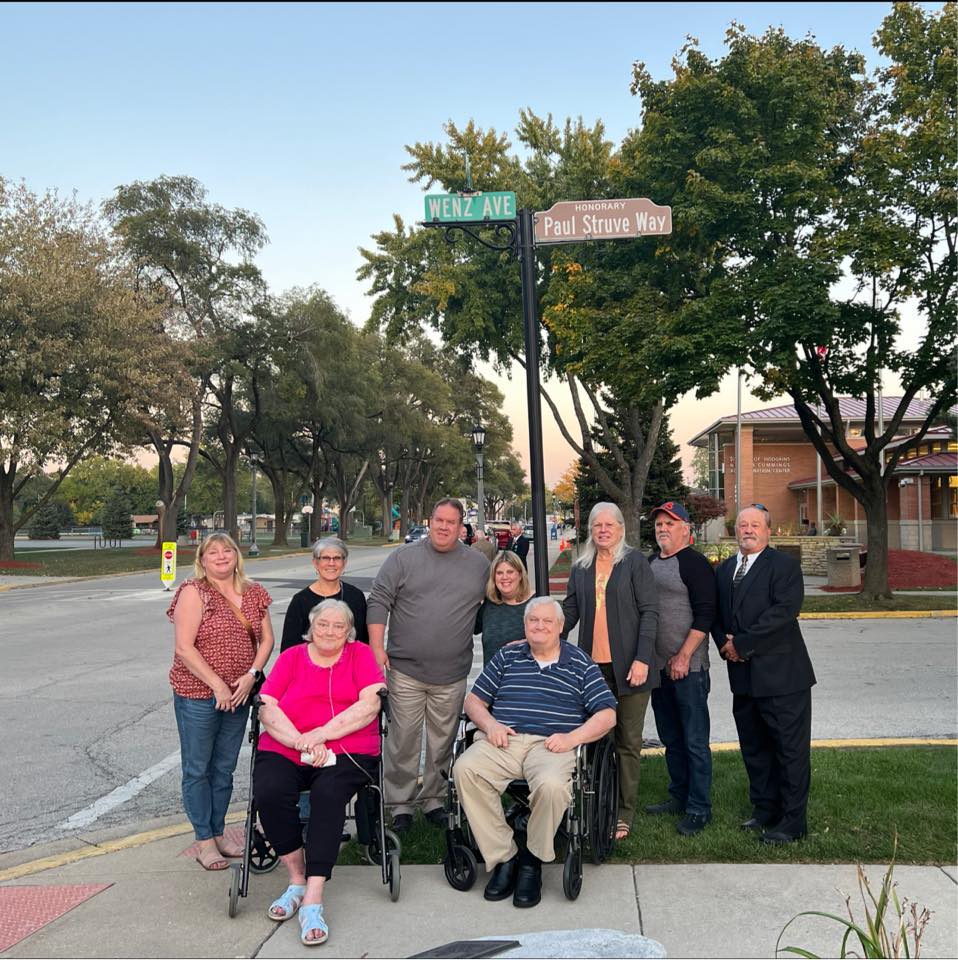 The family of Paul Struve at street dedication on October 10.

Hodgkins village officials gathered last week with friends and family of Paul Struve to dedicate Wenz Avenue in honor of the late trustee who passed away earlier this year.

The dedication ceremony took place October 10 at the corner of Wenz and Lyons Street before the village board’s monthly meeting.

Struve was 73 years old when he passed away in January of this year.

He had been a village trustee for 37 years. 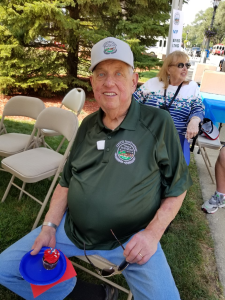 Trustee Paul Struve at the Village of Hodgkins 125th Anniversary Parade and Celebration in August 2021. (Photo by Carol McGowan)

Struve was born on Wenz Avenue in January of 1949. He lived on the street his entire life.

Jacob Wenz was Paul’s great grandfather. His family not only lived in the village, they operated the Village Pantry and the 8 Ball Inn on Wenz Avenue.

In its Communicator newsletter, the village said Struve was instrumental in the transition of Hodgkins into a commercial and industrial powerhouse, and given his impact, found it fitting that they name a street after him.

“I originally thought that people needed a voice. I ran two times in the ‘70s and lost. Since 1985, I have enjoyed being a voice for the people and am very proud of everything coming together over the years.”

Struve always looked to improve the quality of life for those who live in Hodgkins.

“A lot has changed since I was a kid. We check homes for more safety features, can aid with installing a sprinkler in the home in case of fire, etc. We really watch out for each other.”

Members of Struve’s family thanked the village and the community at the dedication.

After the ceremony, village officials and many on hand walked across the street back to the Village Hall for the regularly scheduled board meeting.

Acting Mayor Ernest Millsap was slated to describe his re-appointment plans, which is required for him to do since taking over the position.

He did a “blanket” re-apppointment for all positions. He said everyone appointed by former Mayor Noel Cummings would stay in those positions.

A motion was approved for a final payment to Anthony Roofing Tecta American LLC in the amount of $122,076 for the Frist Student roof replacement and maintenance repairs.

In his report, Code/Life Safety Officer Dan Tholotowsky noted that a meeting of safety plans for manufactured homes went well. He also noted that there is now a fence around the vacant Lonestar Steakhouse property on Joliet Road at the Quarry Shopping Center. This was done to keep anyone from going near or into the property.

He also gave a report about crime being up, mainly at The Quarry Shopping Center.

Klotz reported a situation where an officer patrolling the mall parking lot saw three people going into Ulta that fit a description of subjects that were stealing from other Ulta stores.

He said the trip tried to steal from the store, but were caught by the Hodgkins Police Department.

He said officers are being more vigilant and on the lookout to combat the slight rise in crime.

Health, Safety, & Human Resource Chainman, Trustee Vicky Moxley, noted that flu shots and COVID boosters are available this time of year and urged all to be safe with the fall and winter months ahead.

In other news, the Hodgkins Park District will hold a Halloween Carnival on October 31 from 6-7 p.m. This is for children up to the sixth-grade. It’s free for residents, and $7 for nonresidents.