Skip to content
October 30, 2022/Comments Off on Pigskin Wrap: Catholic League teams power through first round of playoffs 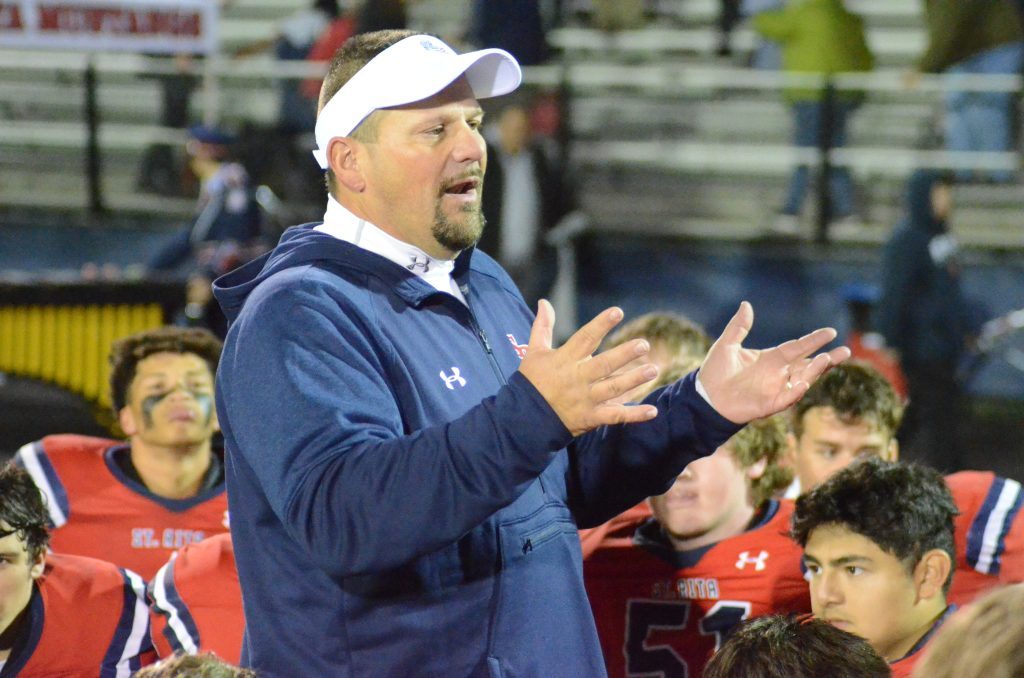 The Todd Kuska Era at St. Rita is coming to a close.

The retiring coach would prefer it would come two days after Thanksgiving, meaning the Mustangs would be playing in the IHSA Class 7A state championship game for a second straight season.

The 12th-seeded Mustangs took the first step in that goal with a 27-14 win over 21st-seeded Geneva in the first round Oct. 28 in Chicago. Junior running back DJ Stewart ran for 153 yards and two touchdowns.

The two teams faced each other in the 7A semifinals last year, with the Mustangs pulling off a 42-20 victory to advance to the state championship game. Wheaton North defeated St. Rita in the title game.

“It’s a good football team that’s been putting up a lot of points and winning a lot of games,” Kuska said of the Falcons. “I know we’re going to have to score some points. We have to be able to execute in all phases of the game.”

Against Geneva, junior Zack Clark had a 63-yard interception for a score and Alabama-bound Conor Talty kicked a pair of field goals. 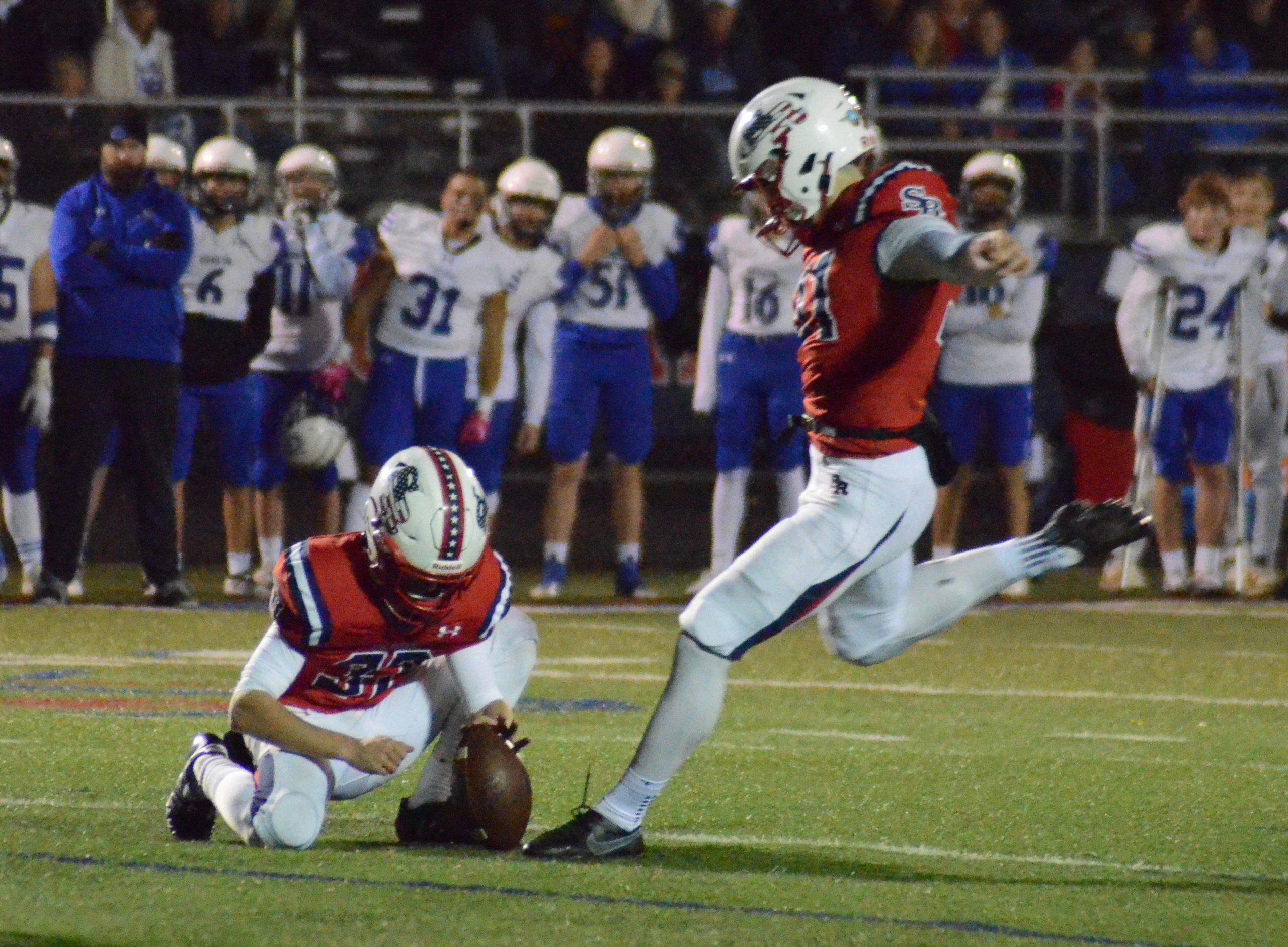 St. Rita’s Conor Talty gets ready to kick his second field goal of the night for St. Rita against Geneva in the first round of the playoffs Friday night. Photo by Jeff Vorva

Early in the season, Kuska announced he would retire after this year. In 25 years at the helm, he has collected more than 200 victories and had more than 50 players go to Division I colleges, and five reach the NFL. Martin Hopkins will take over in 2023.

Kuska said he is trying to focus on football in the waning weeks.

“I just want to keep playing and keep winning,” he said. “Was this my last home game? I hope not. I haven’t really thought much about it. I’m sure as we get deeper, maybe I’ll think a little bit more about it.

CCL/ESCC
It was a banner first round for area teams in the Chicago Catholic League/East Suburban Catholic Conference.

Brother Rice, which was seeded 24th in Class 8A, pulled off a 27-0 victory over ninth-seeded Jacobs in Algonquin. Quarterback Marcus Brown had three rushing touchdowns and Randall Nauden added one. Nauden ran for 122 yards and Brown 86.

Jack Morrison had nine tackles while Henry Ivers and Christian Pierce each had eight in the shutout.

In Class 8A, 18th-seeded Marist knocked off 15th-seeded Naperville North, 42-28. RedHawks running back Chris Lofgren ran for 206 yards and three touchdowns. Quarterback Dermot Smyth threw for 180 yards and a touchdown and ran for 118 yards and two more scores.

Another CCL/ESCC team that knocked off a higher seed was Nazareth in Class 5A, where the 11th-seeded Roadrunners blasted sixth-seeded Glenbard South, 48-22. In a game with some big plays, Nazareth’s Justin Taylor had scoring runs of 41 and 30 yards and quarterback Logan Malachuk had a 56-yard bolt.

Nazareth (6-4) hosts third-seeded Rockford Boylan Catholic (9-1) at a time and date that were not determines by deadline.

Metro Suburban Red
Tenth-seeded Riverside-Brookfield had its season end at 6-4 with a 35-14 loss to seventh-seeded Kaneland in Maple Park.

Chicago Public League
Goode STEM, the fourth seed in the North bracket of Class 5A, enjoyed a 48-0 triumph over 13th-seeded Noble/Pritzker in the opening round.

Venerable win for SXU
Junior running back Amari Venerable returned from a preseason injury and helped lead Saint Xavier to a 52-6 road victory over Judson in a Mid-States Football Association Midwest game on Saturday.

It’s the seventh straight win for SXU, which vaulted up to No. 11 in the NAIA coaches’ rankings.

Venerable ran 11 times for 100 yards and a touchdown and quarterback Stuart Ross threw for 177 yards.

Evergreen Park native and Brother Rice graduate Jessi Plunkett had one carry for a 65-yard touchdown. 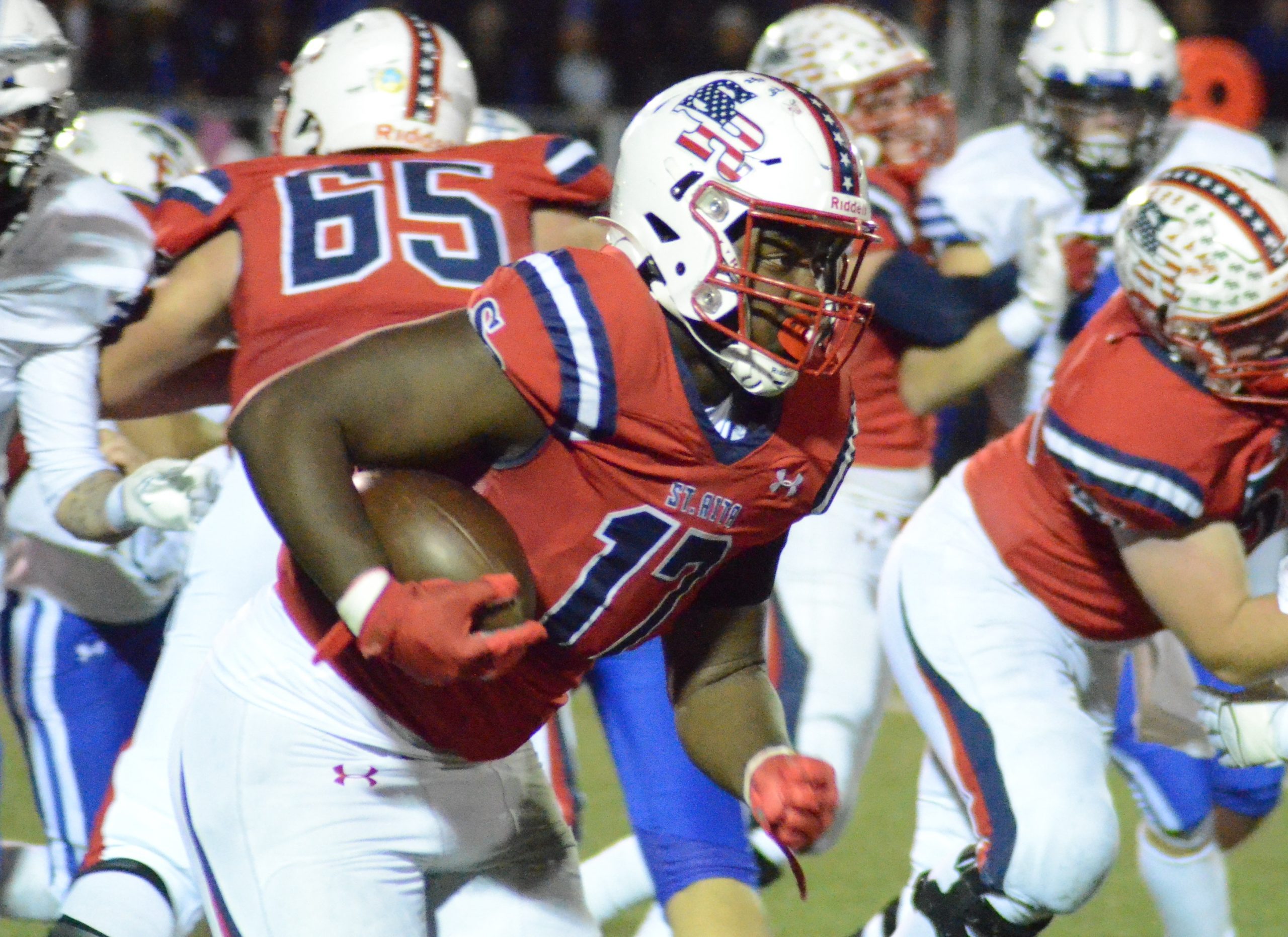 St. Rita’s DJ Stewart, who celebrated his 17th birthday on Friday, carries the ball against Geneva in a 7A playoff opener in Chicago. Photo by Jeff Vorva