But current Evergreen Park Mayor Kelly Burke said that over time, he began to accept the idea.

“We have been talking about this for about six months,” Burke said. “So, we brought it up to him and at first he said, ‘Nah, don’t do it.’ But after a while, he started to think about it and began to accept it.

“He came around,” Burke added. “Time softened him up.” 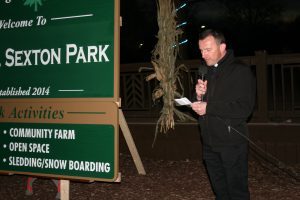 The Rev. Benedykt Pazdan, pastor of St. Bernadette and Queen of Martyrs parishes in Evergreen Park, gave a blessing after 50-Acre Park was renamed in honor of former Mayor James Sexton.

A large crowd of friends, relatives, colleagues and village employees turned out for a special ceremony last Thursday night in which 50-Acre Park was renamed as James J. Sexton Park.

Before the unveiling of the sign that will bear the former mayor’s name, Burke said it was fitting it be named in his honor for all he did to make the park a reality.

Sexton thanked everyone who attended the event and for all the individuals who played a role in the creation of the park at 9100 S. Rockwell. Sexton admitted that he opposed the idea of changing the name of the park.

“A big thank you to all for this,” Sexton said. “I’m not big on renaming parks after public figures. But as long as it’s named after me.”

The last response drew laughter from the crowd who knew that Sexton is known as someone who does not like to make a big fuss about himself.

Sexton served as the Evergreen Park mayor for 20 years, retiring last year. He was a trustee for 14 years and spent five more as village clerk. He began serving Evergreen Park as a public official in April 1987. He has been a resident of the village since 1977.

The former mayor said that Evergreen Park has a lot to offer for families and is like living in a small town.

Sexton said he wanted more retail development but was also looking for additional open space for families and their children to enjoy.

That was the original idea of 50-Acre Park, which replaced the old Evergreen Golf and Country Club that dated back to 1924. The 18-hole golf course and country club was established by the Ahern family. They also opened the Beverly Gardens restaurant and roadhouse along the property.

Sexton entertained the crowd with stories about Beverly Gardens and the long history of the golf course. He mentioned that the roadhouse was the site of a 1933 New Year’s Eve robbery and shootout involving notorious gangster John Dillinger.

One of the scratch golfers who often played at the Evergreen Park course was Machine Gun Jack McGurn, who was noted as Al Capone’s chief hit man, Sexton said.

Sexton said the golf course was successful over the years going into the 1970s but began to hit on hard times in the 1990s. Sexton and other village officials then tried to persuade the current owner, Anna May “Babe” Ahern, to sell the property.

After many years of lengthy negotiations, the golf course was sold for commercial and real estate development in 2010. Anna May Ahern died that same year at the age of 103.

Sexton said the village had a vision when they purchased the old golf course site and later Sterling Bay developed the property.

“Some people were against this but we brought in retail and stores on one end,” Sexton said. “But we also insisted on open space for families and kids. And 50-Acre Park has a dog park, disc golf and a farm.”

Sterling Bay developed the Evergreen Marketplace, which includes a Meijer and Menards on the 450,000-square foot shopping center. But the rest of the acreage was set aside for 50-Acre Park.

The park also has a walking path, a pond, a pergola, a hill for sledding and snowboarding, a driving range for golfers, and a community farm. The Barn has two horses, Jack and Turk, and goats and chickens.

“Students help out at The Barn and many kids with special needs have come here to see the animals,” Sexton said. “This is what we wanted to have for the community.”

While saluting several public officials, including a close friend, Trustee James McQuillan, and Burke, who is also the Democratic state representative from the 36th District, Sexton pointed to his wife of 55 years, Karen, as one of his greatest supporters. He also thanked his son, Jim, and daughters, Kelly and Josie.

The Rev. Benedykt Pazdan, pastor of St. Bernadette and Queen of Martyrs parishes, gave a blessing after the unveiling.

“The most important thing is that we have 50 acres of open space,” Sexton added. “I’m very proud of having my name on this park.”

“Oh definitely, 100%,” Peso said before the ceremony. “He deserves it. He worked hard to get this park here. He is a people person. He always been easy to work with, and he always listened to everybody.”

Burke agreed that that renaming the park for Sexton was the right move.