Skip to content
November 4, 2022/Comments Off on From Brother Rice to the big leagues: Palos Park’s Michael Massey is having a Royal summer 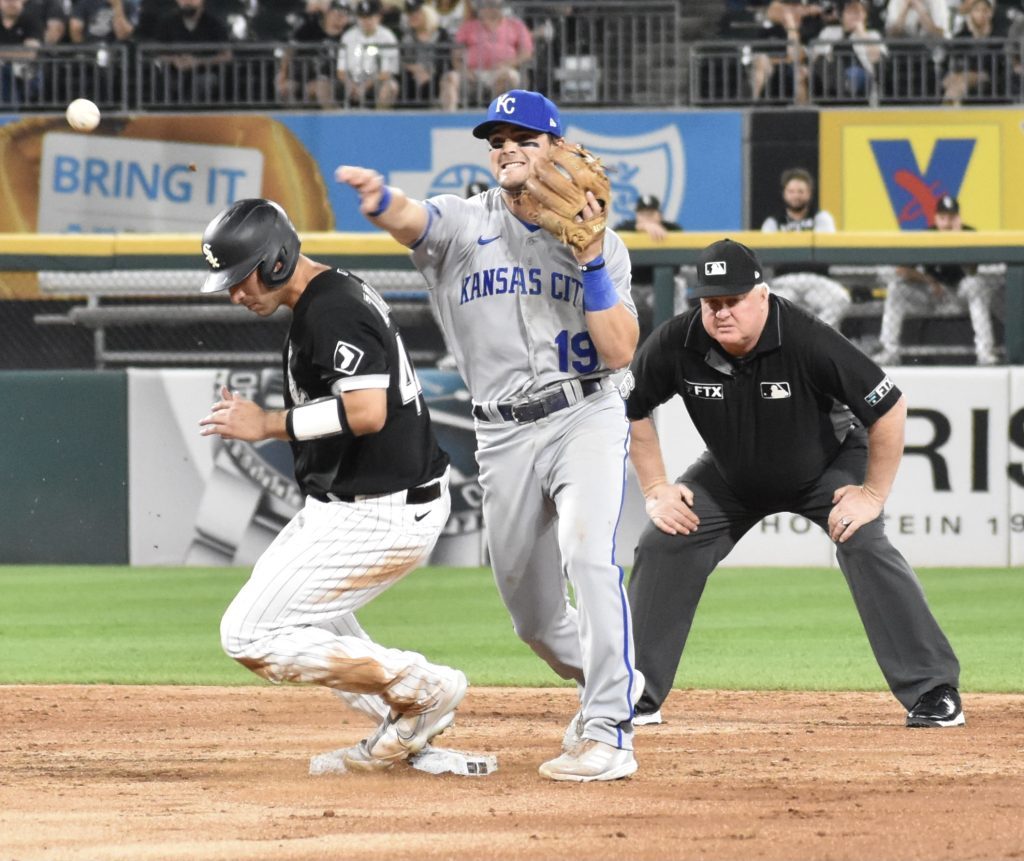 From Brother Rice to the big leagues: Palos Park’s Michael Massey is having a Royal summer 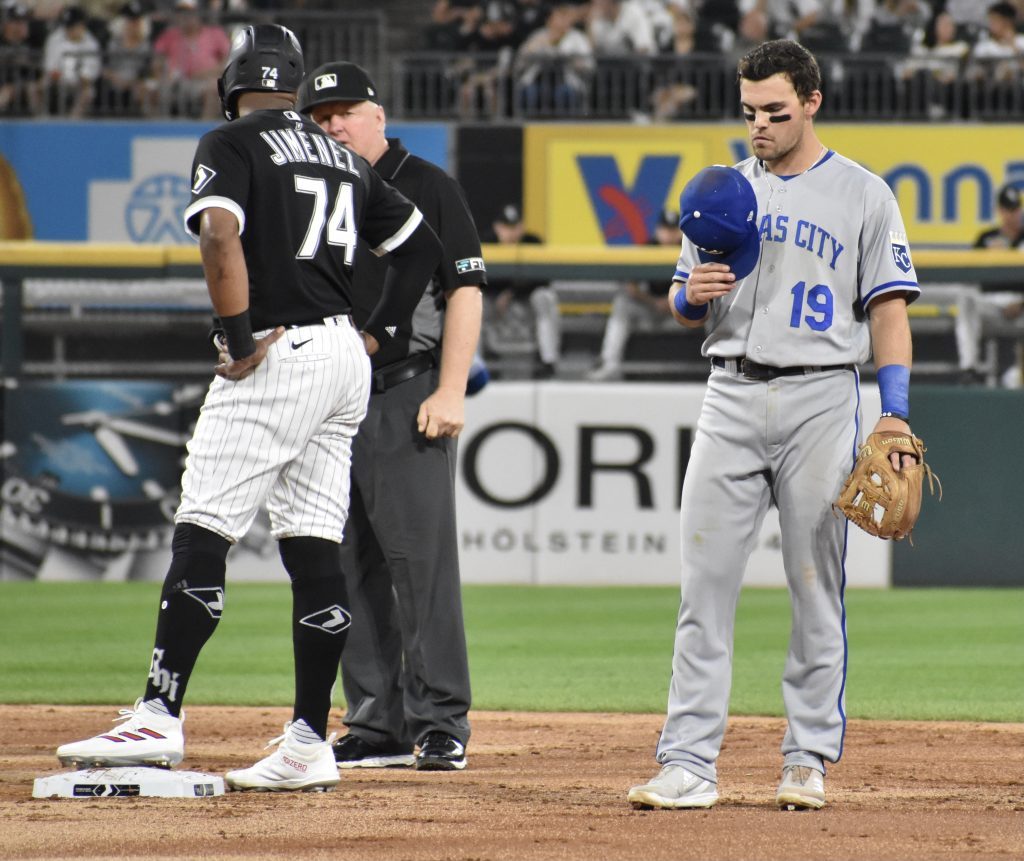 Michael Massey checks notes on defensive strategy in his cap as Eloy Jimenez chats up an umpire.

Whether his career ends tomorrow, next year or in 10 years, Michael Massey is definitely enjoying Major League Baseball.

Massey, 24, grew up in Palos Park where he played Little League. From there it was four years of ball at Brother Rice, and three years at the University of Illinois.

He left college early to start playing minor league baseball after he was the 109th player selected in the 2019 MLB draft.

And on July 15, he made it, joining the Kansas City Royals in Toronto.

Last week, he made his second visit to Chicago’s South Side where he and his teammates played a three-game series against the White Sox.

“It’s definitely an adjustment. Growing up, you’re not playing on TV. Obviously, the pitchers are better, the fielders are better. It’s an adjustment, but the guys have welcomed me,” Massey said before the Royals’ 9-7 win on Aug. 30. 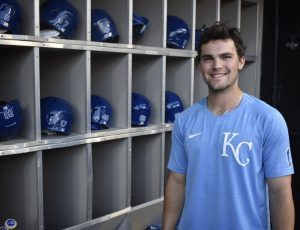 He enjoys the stadium and fans in Kansas City.

“(The stadium) is super cool with the fountains,” he said. “The fans are great. They get into it. They’re really supportive of the young guys.”

Massey is part of a big youth movement. The Royals, far out of contention this season, have called up many promising players.

“It’s what I thought. The pace of the game is really quick. The pitchers are really good,” Massey said.

“When you play a game around the best 750 guys in the world, every single night you see some pretty incredible things. It’s cool to have that opportunity to compete. The challenge keeps me motivated,” he said.

He has answered that challenge.

Massey, who starred at Brother Rice and Illinois, began to believe he had a shot in 2021 when he was playing High A ball for the Quad Cities.

“To be completely honest with you, there’s a lie out there when people talk about confidence. I’ve always been a big believer in you have to create what you think is going to make you successful, and then have the trust and faith to follow that plan. Then you get confidence from doing it,” he said.

After the Quad Cities, Massey moved up to Northwest Arkansas in AA ball and Omaha in Triple A.

“When I got called up it was really cool,” he said.

Massey had taken that day off to rest his legs after playing “40 or 50 straight.” Then he got the news: His next game would be in Toronto.

A large group of family and friends where there. Many showed up for the Royals’ games in Chicago. Massey spent time before and after games visiting with them. Fun fact: Players have to buy the tickets they hand out.

On the field, he’s all business, trying to adjust to pitchers who try to befuddle him.

“Every single night is that elite challenge. You know that guy’s going to have his stuff and you better bring it,” Massey said.

“The mental grind of being locked in every day, that’s been the biggest adjustment,” he added.

That still beats the minors where he once endured a grueling 14-hour bus ride to Midland, Texas. “We got in at 4 in the morning, played that night.”

It’s a thrill for him to play on 35th Street as he grew up a White Sox fan and fondly recalls the 2005 World Series championship.

“I get asked a lot about that when I come back here. My favorite player was Scott Podsednik. That’s why every night I wear the eye black,” he said.

He’s learned to care for his body. He was one of the last Royals off the field after warmups before the game.

“Over time, you begin to learn when you take your chances,” he said, noting it “probably isn’t a good idea to blow out your hamstring” on a grounder to the pitcher.

“You can’t help the team on the injured list,” he said.

“He’s a joy to have around. We’ve seen some really good things from him. … He has a mature approach at the plate. … Michael is able to make adjustments really well,” Matheny said. 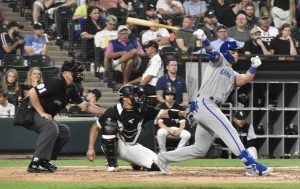 This turned into a ground out for Michael Massey, who was batting .281 through 29 games.

Massey is grateful to Brother Rice and Illinois, where he played three years on each varsity team.

He’s especially thankful coaches at Brother Rice stuck with him despite 25 errors in 35 games his junior year in 2015.

Those were mostly at shortstop, said Brother Rice Head Coach Sean McBride, then an assistant coach.

Struggling in the field, he asked McBride to hit grounders to him at 7 a.m. on a Saturday when the team wasn’t due to report until 9:30.

“The combination of his personality, his work ethic, what kind of family he comes from. … I knew if he caught a couple breaks, stayed healthy, he had a chance,” McBride said.

This season Massey won the Gold Glove as the best fielding second baseman in the minors.

“His turns have gotten better at second. We didn’t know what to expect,” Matheny said. “He hasn’t looked overwhelmed. … Good arm. Good range.”

At 6 feet and 190 pounds, Massey is living proof you don’t have to be a muscle-bound giant to play.

He urges youngsters to stick with the game and not give up when it gets rough: “Show up every day and give your best effort. You never know what’s going to happen.”

He has learned another Mike Massey – no relation – was a big-leaguer. The first played for the Boston Braves in 1917.

“My brother Googled my name and said, ‘Hey, you played for the Boston Braves and you’re dead already’,” he said with a laugh. 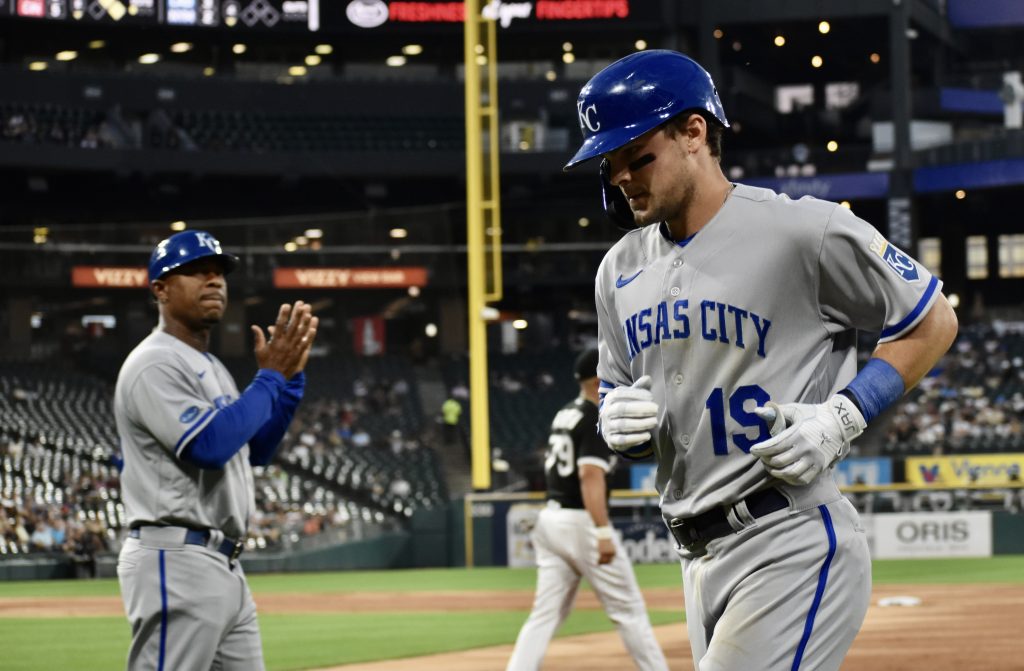 Michael Massey returns to the dugout after grounding out.