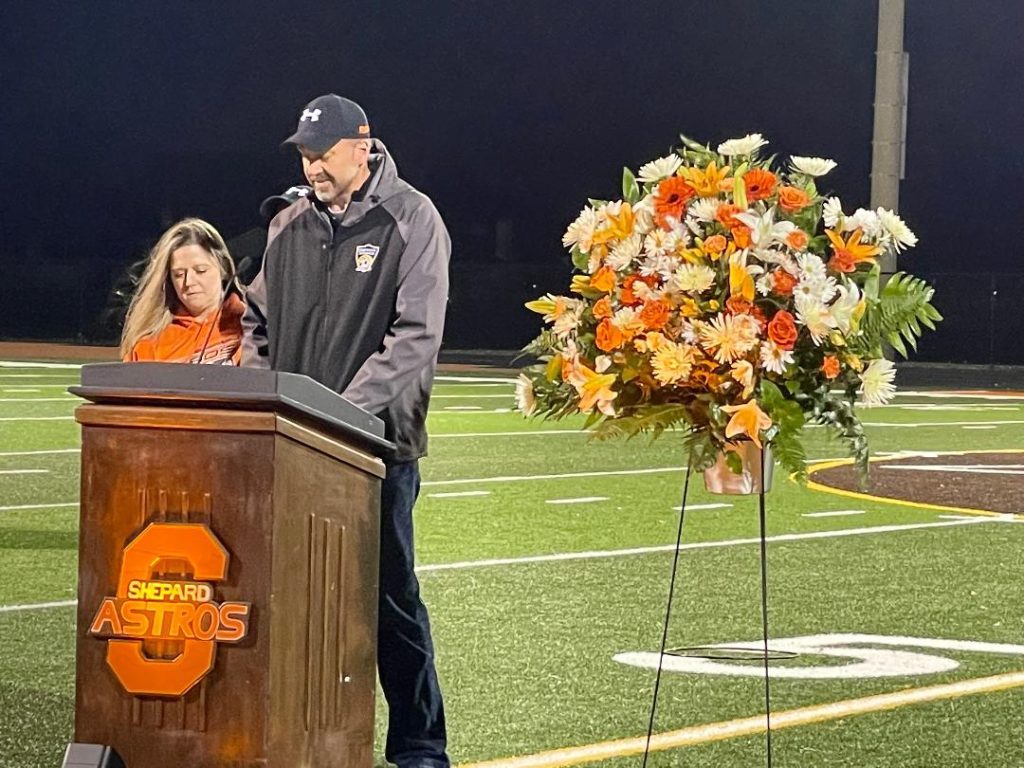 Jen and Dan Plowman talk about their son, Ryan, during a vigil held in his honor on Wednesday night at Shepard High School in Palos Heights. (Photos by Kelly White) 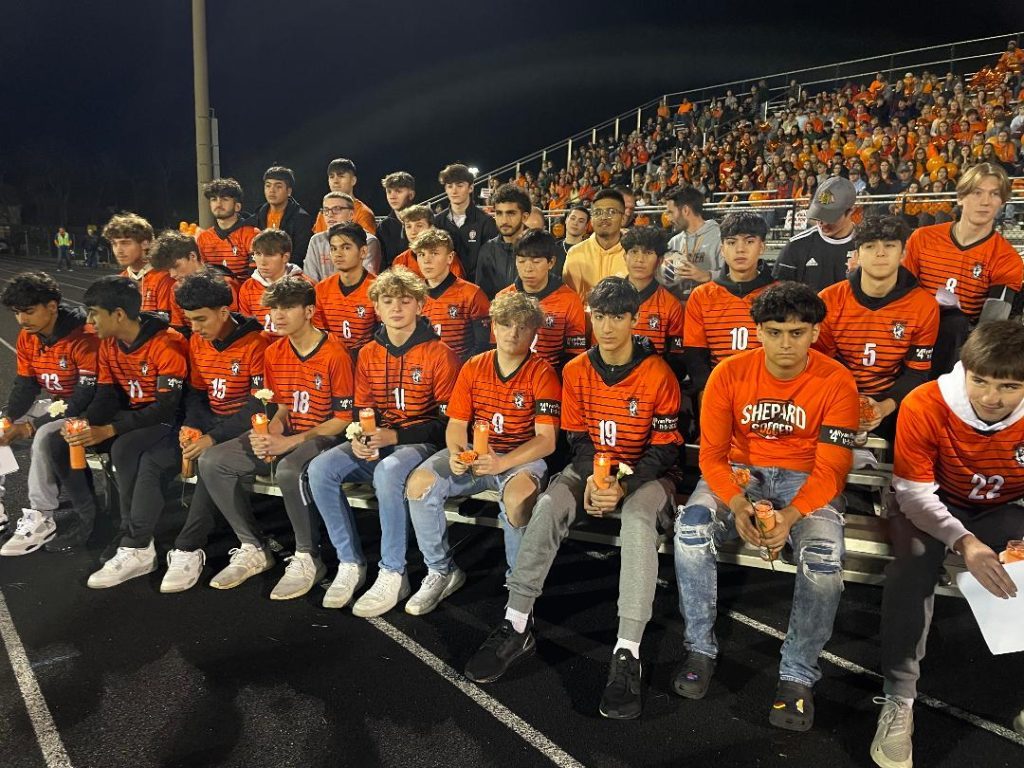 Ryan Plowman’s soccer team at his vigil held on Wednesday night at the high school in Palos Heights.

Ryan Plowman will forever be remembered by his classmates and educators as an All-American kid who always put others above himself.

The 17-year-old Shepard High School student from Crestwood passed away suddenly after a short battle with mononucleosis on November 5.

“Ryan was the epitome of pure heart and soul,” said Renee Belsky, Community High School District 218 special education teacher. “In this life, there are givers and there are takers. Ryan has always been a giver.”

Ryan, a graduate of St. Damian Elementary School, leaves behind his parents, Dan and Jen, along with his brother Drew, a Shepard High School freshman.

Ryan’s passion, aside from excelling in academics, laid on the soccer field, where he played as a defender. 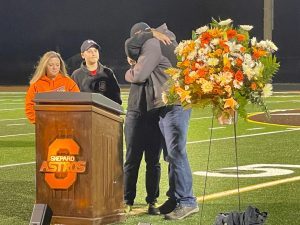 “From the moment he was born on July 16, his inner joy shined,” said Zeno Toscas, Shepard High School soccer coach. “Everyone loved him instantaneously. It was Ryan’s good attitude and likable personality that drew the multitude of family and friends to be by his side at Comer Children’s Hospital for a week as he courageously fought mononucleosis.”

Toscas, a family friend of Dan and Jen Plowman, had not only known Ryan since his birth, but also coached him in soccer for the past six years through Crestwood Youth Soccer and the past three years at Shepard High School.

“He (Ryan) was an absolutely wonderful kid,” Toscas said. “He always worked so hard and even when he wasn’t the best on the field, he was still constantly reaching out to help those in need. He was humble and a great leader, always doing the right thing. Some kids need a title – some kids need to be or know they are the captain – Ryan didn’t need that. He always had a smile on his face and made the field and practices a better place to be.”

Ryan played in Shepard’s last soccer game of the season on October 25 before testing positive for mono on October 30. Due to a compromised immune system related to his diagnosis of Crohn’s Disease, Ryan’s body couldn’t fight off several complications from the virus and he passed away on November 5.

Along with Ryan’s parents, Toscas organized a vigil for Ryan on November 9 at the Shepard High School football stadium. The event was open to the public and Ryan’s family asked anyone who attended the vigil to wear something orange (one of Shepard’s school colors) or Shepard apparel.

“It is incredible to see how many people cared for Ryan,” Ryan’s father, Dan, said. “This has assured us that Ryan will never be forgotten.”

“We also have received an outpour of community support, especially from other schools,” Toscas said.

The support is no surprise for anyone who knew Ryan, however, Toscas said.

“Ryan had an infectious character about him that just made you want to be around him both on and off the field,” Toscas said. “He was taken way too soon.”

Tocas has also started a gofundme campaign for Ryan’s family at https://www.gofundme.com/f/ryan-plowman-memorial.

Toscas wrote, “We are kindly asking for donations for this incredible family. Your donations will be used to cover medical costs, lost wages, upcoming funeral expenses as well as other unexpected needs that may be incurred. If you can find it in your heart to make even a small donation to help with these expenses, it would mean the world to them and would help to lessen that financial burden while they grieve and learn how to cope with the loss of their son.”

The entire Shepard High School community mourned the loss of one of their own, along with Toscas.

“Ryan was kind, gentle, respectful, intelligent, humble, and a pleasure to know,” said Brittany Gray, school counselor at Shepard High School. “I will forever remember his smile. My last interaction with him in October was to help him prepare for college. He was excited about his future and so was I. He was very responsible in getting his tasks done. His passing has touched me deeply and I am so sorry he will not get to experience all the things that he worked so hard for.”

Ryan was planning to attend Butler University in Indiana and to study to become a pharmacist or a physician.

In lieu of flowers, donations to the Crohn’s & Colitis Foundation, www.crohnscolitisfoundation.org (733 Third Avenue, Suite 510, New York, NY 10017) would be appreciated.

“Ryan was one of the best kids to come through Shepard High School,” said Elizabeth Gehrke, an English teacher at Shepard. “He truly embraced the high school experience. Ryan really put himself out there to get the most out of everything. He was smart and athletic and genuine. He will be missed by staff and students and teammates, and anyone else that knew him.” 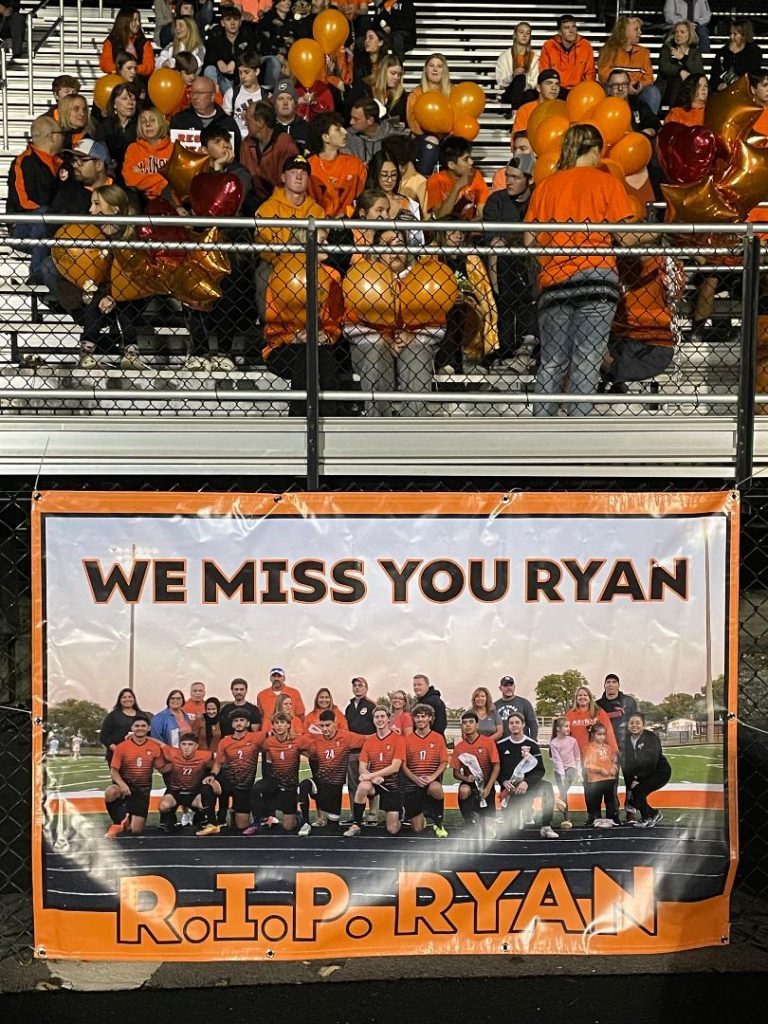 Shepard High School classmates of Ryan Plowman show their love for him during a vigil in his honor Wednesday night.