Skip to content
November 13, 2022/Comments Off on Nazareth blanks Morgan Park, advances to Class 5A semifinals 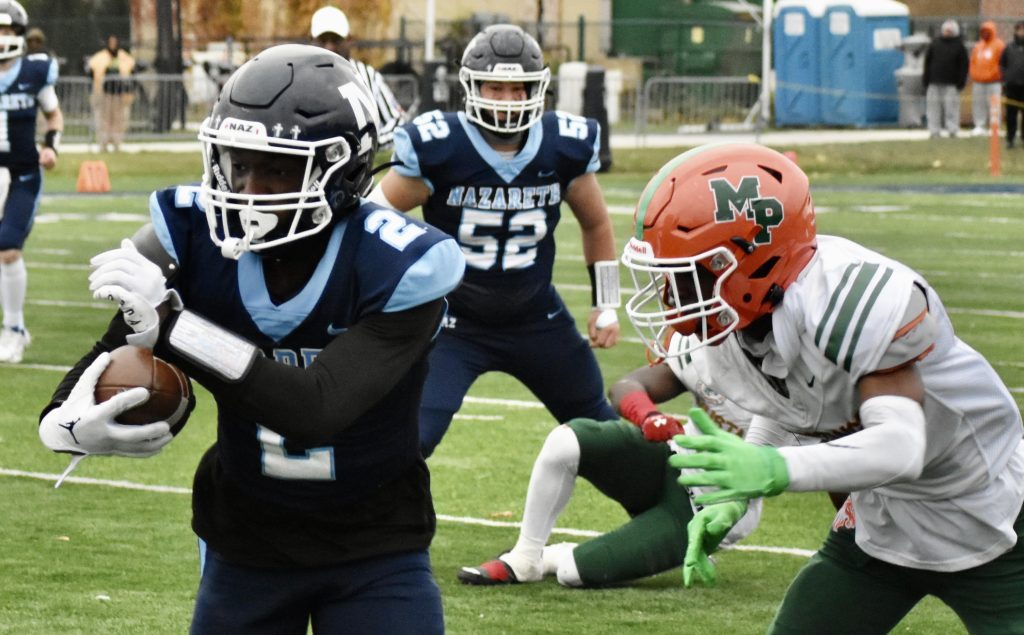 Nazareth senior Justin Taylor scored two touchdowns to help the Roadrunners advance to the IHSA Class 5A semifinals with a 29-0 win over Morgan Park. Photo by Steve Metsch

Justin Taylor has not forgotten the sting he felt watching Fenwick celebrate its IHSA Class 5A quarterfinal victory on Nazareth’s home field roughly one year ago.

Taylor repeatedly reminded his teammates of that scene during practice last week as the Roadrunners prepared for this season’s quarterfinal matchup against Morgan Park.

“That was the juice to get us going in this game,” Taylor said after Nazareth defeated the Mustangs, 29-0, on Nov. 12 to advance to the Class 5A semifinals.

Taylor and sophomore running back Alexander Angulo each scored a pair of rushing touchdowns and the Roadrunners offense outgained that of the Mustangs, 213 yards to 115, as Nazareth (8-4) won for the seventh time in eight games. The Roadrunners will play at Sycamore this week with a trip to the state title game on the line.

This marks their sixth semifinal appearance since 2014, all under coach Tim Racki. They won the previous five.

Morgan Park entered the game 10-1, while Nazareth squeaked into the postseason by finishing 5-4. But the Roadrunners have continually improved as the season progressed, and they have been rolling since a 1-3 start to the season.

“We really don’t look at the record,” Taylor said. “Our mindset is to play the best football that we’ve been playing.”

Freshman defensive lineman Lesroy Tittle hammered Mustangs quarterback Marcus Thaxton to force a fumble on the fourth play of the game, and it was all Nazareth thereafter. It did, however taker them a while to get going. 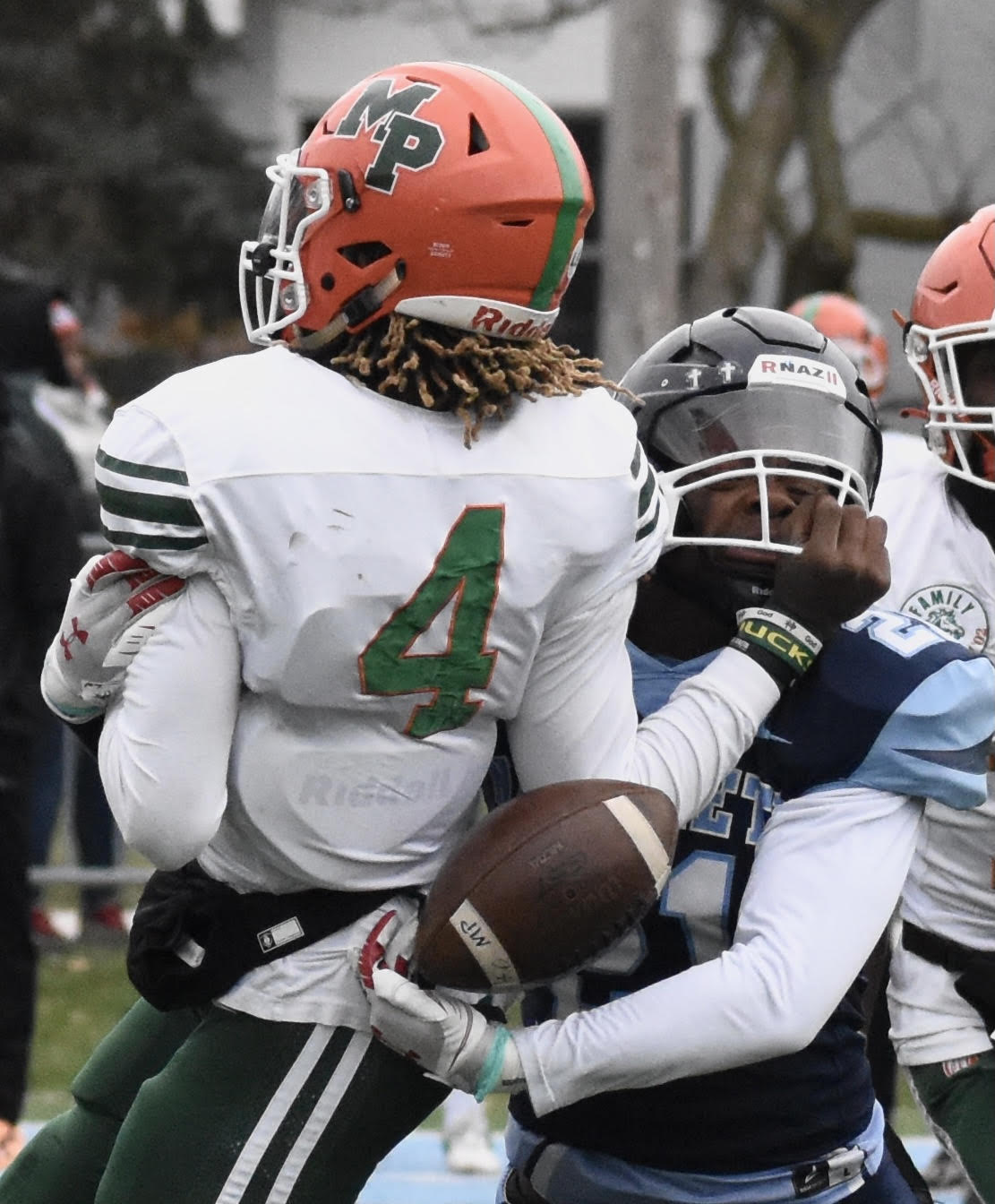 Fewer than 90 seconds later, Taylor bulled into the end zone for his first touchdown and a 9-0 Nazareth lead.

“Once we got comfortable, we started building on that and kept going,” said Taylor, who gained 54 yards on 11 carries.

Nazareth all but put the game on ice with a 10-play drive to start the second half. This time, Taylor finished it by scoring from six yards out.

“It was about Week 7 when you saw the maturity,” he said. “It was like raising a kid. You see them grow up into men. I took the training wheels off, so I’m a proud dad.”

Nazareth’s defense held the Mustangs to 96 yards passing and 19 rushing.

“Our defensive coordinator, Keith Lukes, came up with a tremendous game plan,” Racki said. “I did not think we’d shut them out, so a tip of the cap to Keith.”

“I was on the field here, seeing all the seniors cry,” said Kaminski, who had one sack. “We didn’t want that happening again.”

The game against Sycamore will be fun, Racki said.

“They’ve been coming here for 7-on-7s every summer for years,” he added. (Sycamore coach) Joe Ryan and I are friends. It will be nice seeing him again. 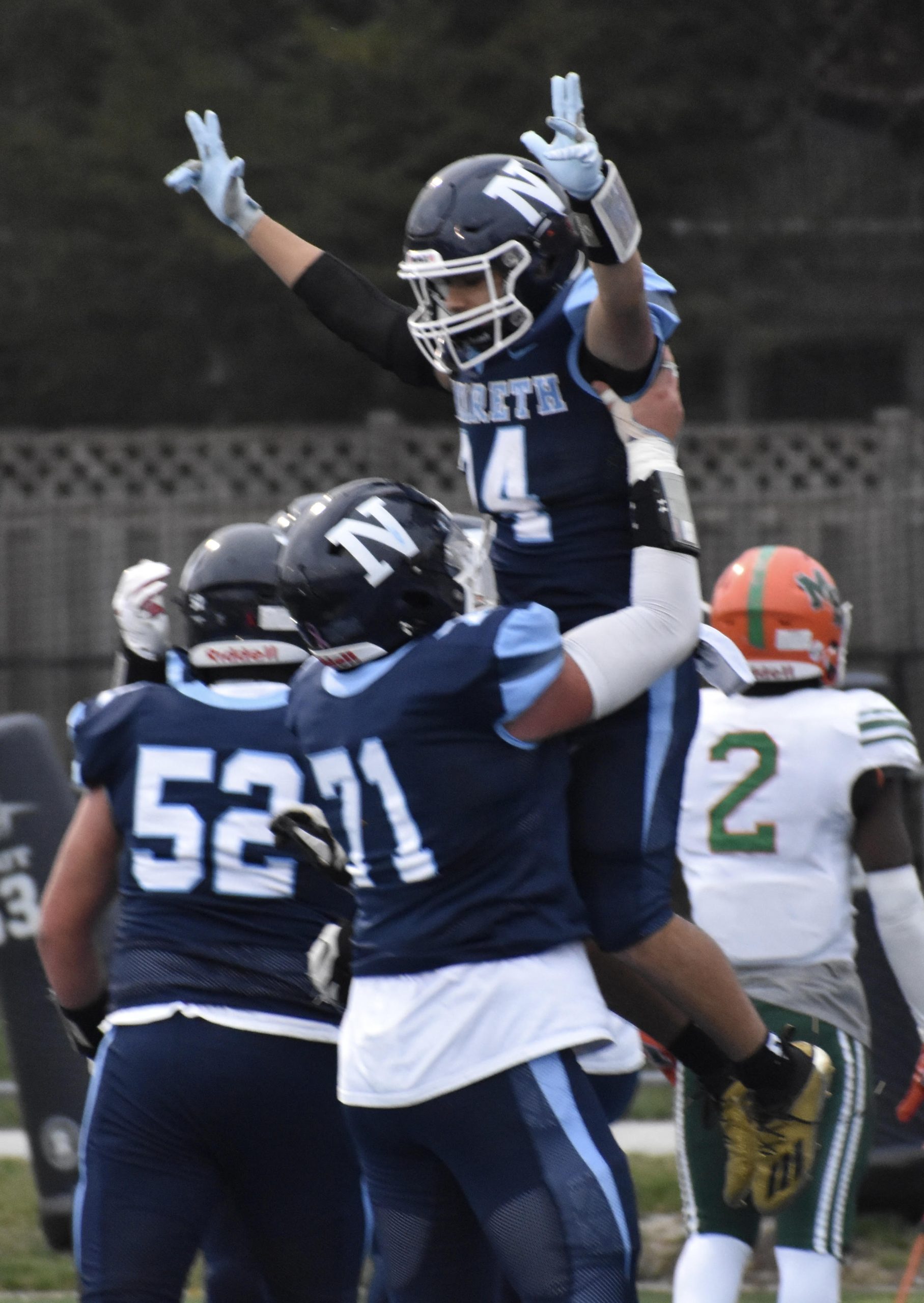 Nazareth sophomore running back Alexander Angulo gets a lift from senior offensive lineman Aaron Bustamante after scoring a touchdown in a Class 5A quarterfinal win over Morgan Park. Photo by Steve Metsch