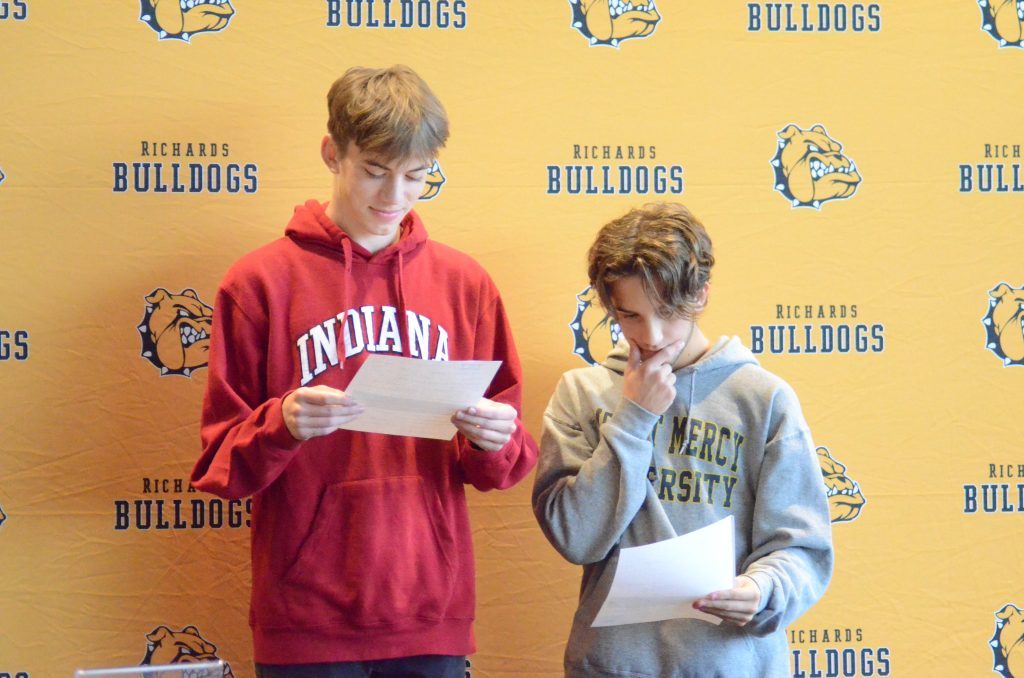 Owen Forberg, left, and Josh Smith of Richards examine their letters-of-intent that they signed on Nov 9. Photo by Jeff Vorva

Back in the early 1970s, Richards had an outstanding distance runner, Ray Giff, who went on to run at Indiana University.

History has repeated itself.

Giff, a retired compliance examiner who lives on Chicago’s southwest side, was on hand for the signings at the Oak Lawn school. He said he has been watching Forberg run for years.

“Owen has been outstanding throughout his career,” Giff said. “I didn’t really run super-fast for Division I quality until later my senior year. I might have gotten a scholarship after what I did my junior year, but it wouldn’t have been Division I.”

Forberg finished 20th in the state in the Class 2A race at Detweiler Park in Peoria with a time of 16:04.56 seconds, the best area finish in Class 2A.

His father, Lawrence, is a former head cross country coach at Riverside-Brookfield, which just won the 2A XC title.

Owen plans to pursue a degree in environmental science and police, with the hope of someday becoming a city manager.

He said he has loved cross country since his early childhood.

“Running is rewarding,” he said. “It’s not necessarily liner growth, but you see the work you put in through the season by the end. The results are there that reflect what you have done.”

Forberg has some business in the spring he wants to take care of. He is taking aim at Giff’s school record in the 800-meter run.

Giff hope he gets it.

“There’s too much dust on the record and too many cobwebs on it; it needs to be cleaned off and freshened up,” Giff said. “He’s the guy to do it.”

Smith is eyeing a pre-law degree at Mount Mercy with the hopes of becoming a lawyer.

He said he loves running to stay active and healthy, and enjoys meeting people.

“I love the running community and all of the different people to get to know,” he said. 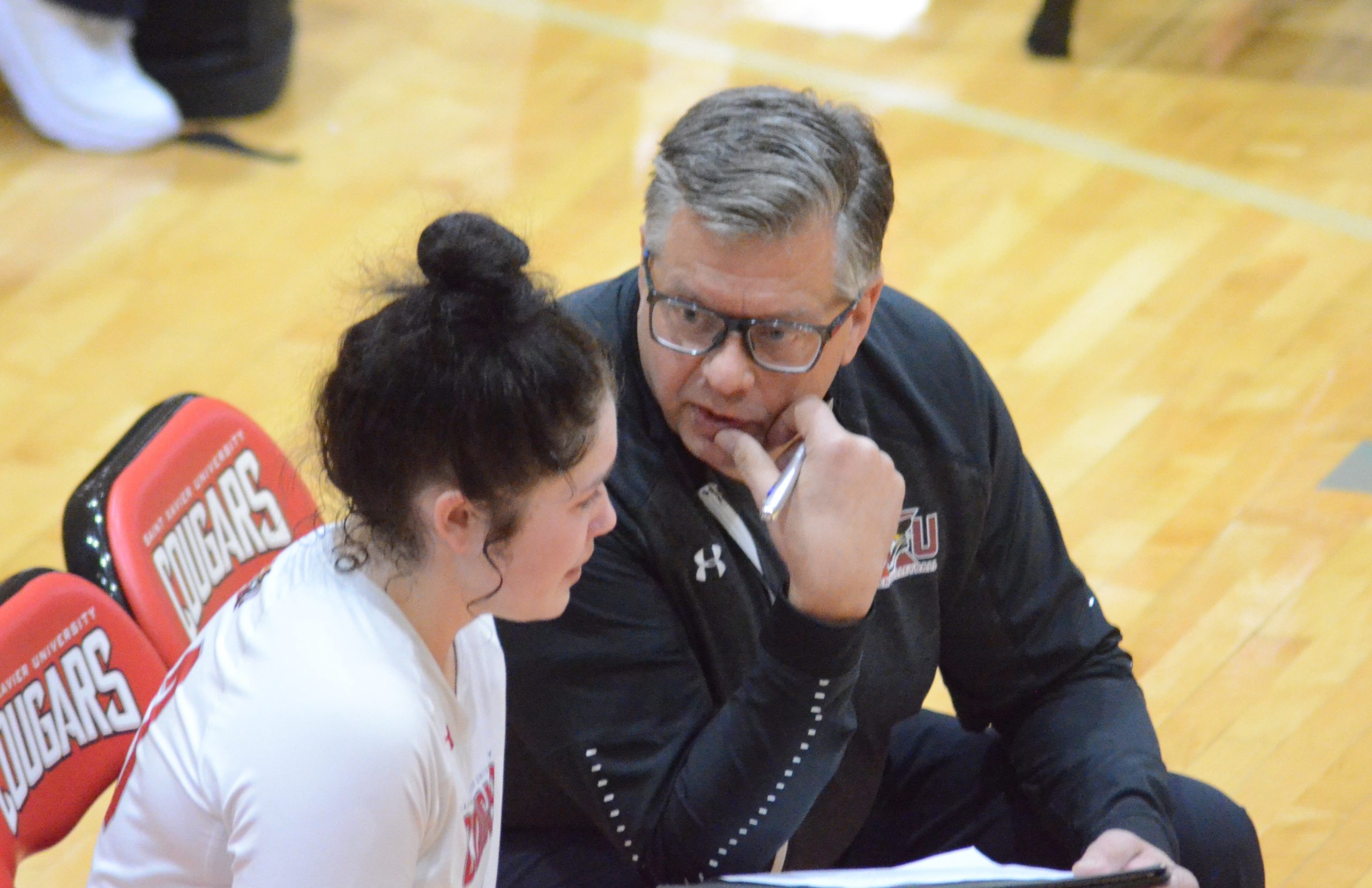 The Cougars head to the NAIA Women’s Volleyball Opening Round, to be played Saturday. The location and time that was not announced until after this newspaper’s deadline.

Sophomore setter Kaleigh Ritter (Lincoln-Way East) recorded her 18th double-double of the year with 38 assists and 10 digs, along with two kills and a block.

Sandburg’s Julia Barry closed her high school career on a big note, finishing ninth in the 100 butterfly with a :56.97.

Yuki is back
The Chicago Red Stars re-signed Yuki Nagasato to a one-year contract on Friday. She scored three goals in 21 games this season, including a pair against Racing Louisville Aug. 27. 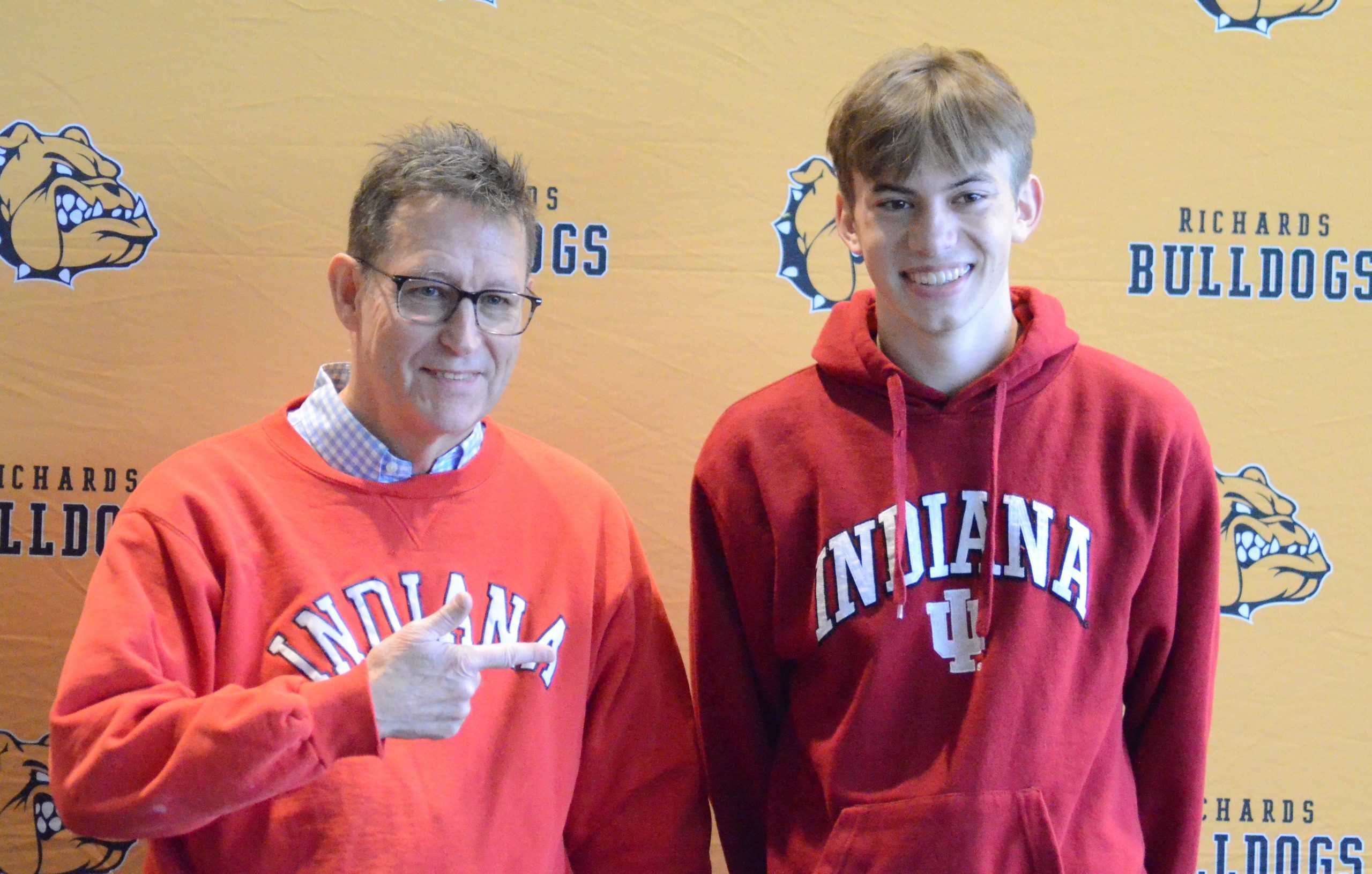 Ray Giff, left, is a former Richards and Indiana standout runner and was on hand to watch Richards’ running star Owen Forberg, right, sign his letter-of-intent to Indiana on Nov. 9 Photo by Jeff Vorva