Skip to content
November 19, 2022/Comments Off on Chuy to run for mayor

Less than 48 hours after he trounced two challengers at the polls, the veteran politician announced his intention to ditch the halls of Congress for the fifth floor of City Hall.

In a 15-minute speech delivered at Navy Pier on Thursday, Nov. 10, García told cheering supporters that he hoped to revive the “black-brown” coalition made famous 40 years ago by U.S. Rep. Harold Washington when he launched his mayoral campaign, which culminated in triumph in 1983. 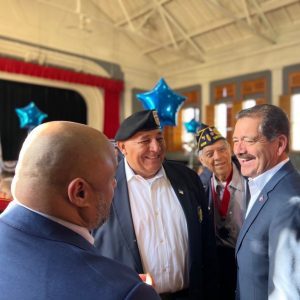 In fact, García invoked the late mayor’s name multiple times in 15 minutes, reminding everyone that he was an early and steady supporter of Washington.

In his remarks, the congressman covered familiar ground, laying out biographical details from his arrival in Chicago with his Mexican immigrant parents through his schooling and start as a political activist. He detailed what he called his fight against racial and ethnic bigotry and other forms of injustice, adding that he would carry those battles to City Hall.

A longtime resident of the Little Village neighborhood on the Lower West Side, García was first elected to public office in the 1980s as 22nd Ward alderman. He also served as a state senator and county commissioner before being elected to Congress.

At his Navy Pier announcement, García spoke only in general terms about his plans for the city, offering no specifics. Curiously, in his 15 minutes of remarks, he offered no criticisms of Mayor Lori Lightfoot and did not even mention her by name.

“Chicago is a crossroads,” García said, without describing exactly what the intersecting roads are. “Chicago needs a leader with a vision of our future and the know-how and the empathy to get us there together. From crime to unemployment to the shortage of affordable housing, there is so much we need to build. As we emerge from a global pandemic and a racial reckoning that exposed the painful history of inequity in our city, people are still living paycheck to paycheck, and folks are living in fear of losing their homes, their livelihood and yes, even their loved ones.”

If the congressman hopes to revive the old Harold Washington coalition, he may have to do it without two of the most powerful unions in the state. The Chicago Teachers Union has made it clear that they are backing Cook County Commissioner Brandon Johnson, a CTU organizer. On top of that, last week the Service Employees International Union Local 73 announced its backing of Johnson.