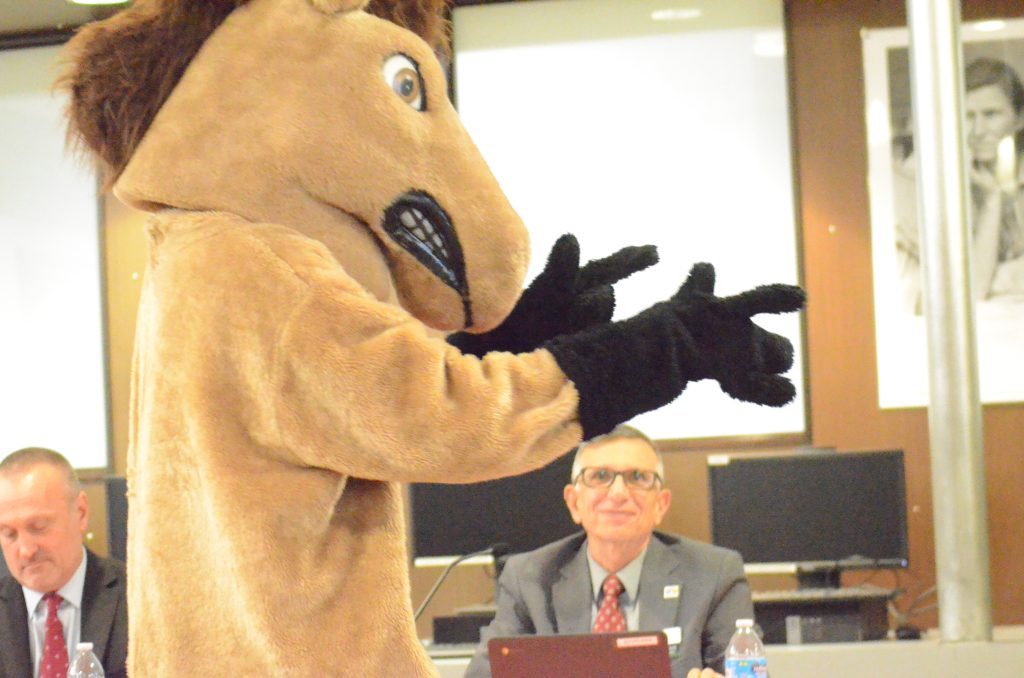 Stagg High School's mascot was at the Oct. 27 board meeting and horsed around a little during a part of it as Board President Tony Serratore looks on. (Photo by Jeff Vorva)

The pandemic may have helped to lower test scores in math and language areas throughout the nation, but Consolidated High School District 230 scores remained level.

Assistant Superintendent of Instructional Services Katie McMillan reported to the board on Oct. 27 that a national report card had the district scores close to 2019 standards.

McMillan said that the Annual Summative Designations were calculated for the first time since 2019 and changed since that time to respond to the impact of the pandemic on schools.

“Our math scores have gone up, but our language arts scores took a little bit of a dip,” she said. “But that calculation has changed. We have to take a little bit of time to dig into how the state is scoring it so that we can see what it is that got us that way.”

Board President Tony Serratore said that given the large national dips among fourth-graders and eighth-graders, this was good news.

“We’re the same or a little better,” he said. “Most scores are going down, but we were able to keep the same or go up.

“I think it’s fantastic and it says a lot about our teachers and students and staff in the face of the adversity they have gone through. It’s remarkable and we should be proud about that.”

One of Consolidated High School District 230’s biggest bashes of the school year is the Legacy Hall celebration, which was held last week at Silver Lake Country Club in Orland Park.

Tickets can be purchased at d230foundation.org/legacy-hall.

The board gave a green light for Sandburg’s band to participate in the London New Year’s Day Parade in 2024. There will be no cost to the district as the cost will all be footed by fundraising.

Sandburg students will also travel to Ann Arbor Mich., on Jan. 12 for a United Nations at the University of Michigan program.

Stagg’s baseball team will travel to Orange Beach, Alabama, March 25 for a tournament.