Nazareth players celebrate winning the fourth football championship in the school's history on Nov. 26 in Champaign. Photo by Jeff Vorva

Nazareth opened the season in August with a 2-0 win over Kankakee.

It closed the season the afternoon of Nov. 26 with a 45-44 win over Peoria at Memorial Stadium in Champaign to take the IHSA Class 5A state championship.

In between was a rollercoaster of wins and losses and a scramble just to make the playoffs.

“This was appropriate for these guys — nothing came easy,” Nazareth coach Tim Racki said after the one-point victory. “If it wasn’t for that [win over Kankakee] with the safety, we wouldn’t be here right now. I was out of my mind after this game because it was an incredible game.”

To win their fourth state title, the Roadrunners (10-4) competed in a game in which the teams combined for 89 points, 140 plays and 846 yards. Nazareth had to deal with Peoria monster running back Malachi Washington, who carried the ball 48 times for 275 yards and six touchdowns.

After Washington’s final score with 5:15 left in the game to pull the Lions (12-2) to within 45-44, he was met by Roadrunners sophomore Gabe Kaminski, senior Braden Ferguson and senior Finn O’Meara inches away from the goal line on the two-point conversion attempt. That turned out to be huge.

“I followed out defensive coordinator [Keith Lukes’] plan, Kaminski said. “He’s an incredible coach and we just followed through on his plan.” 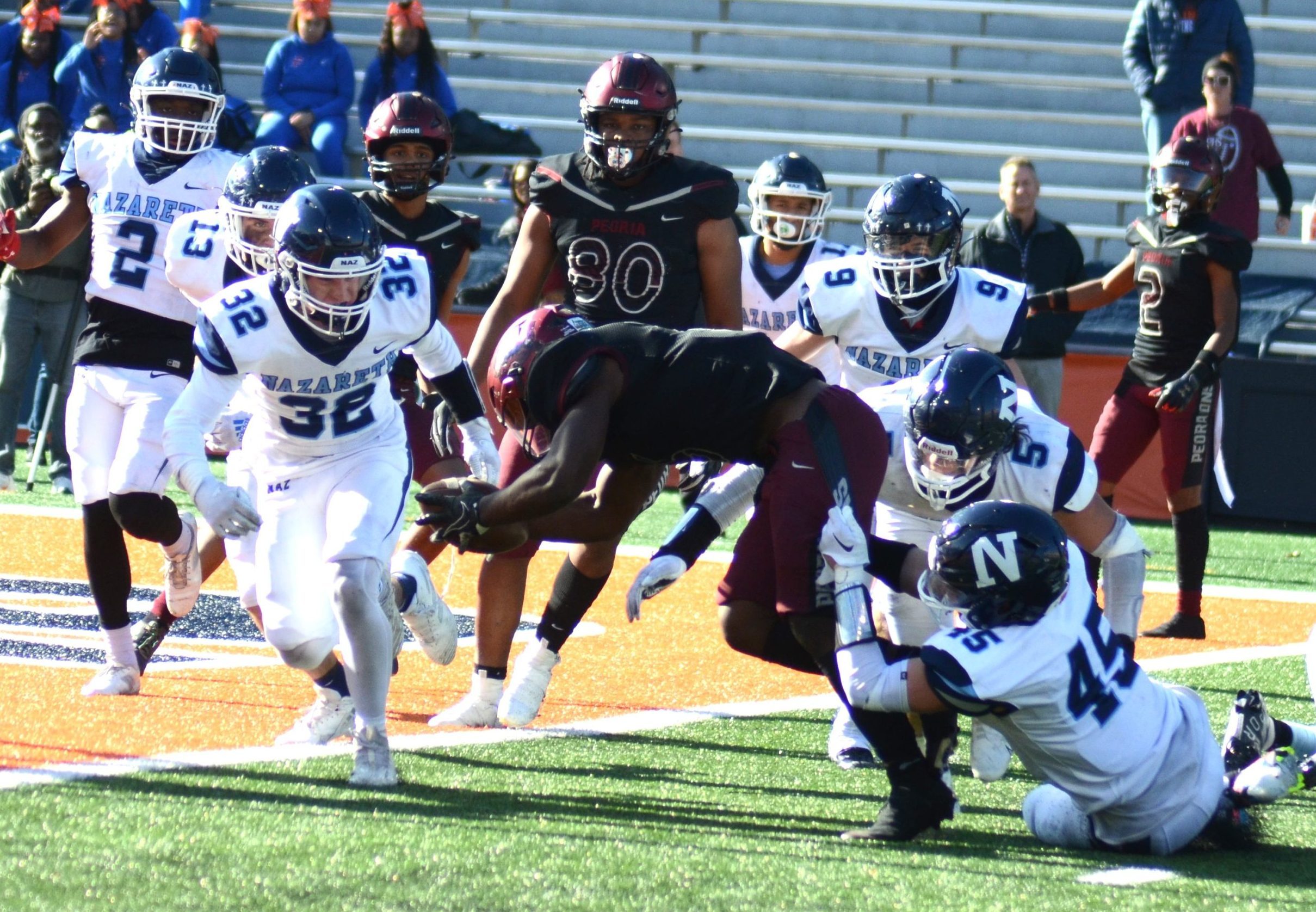 Peoria had one more possession to try to take the lead, but it was dashed with 59 seconds left on a Zach Hayes interception.

“I made a break on the ball, I secured it and the feelings that just rushed through my head…I mean…I can’t believe it,” Hayes said after the game. “I’m still in shock. This is all I have ever wanted. And to make the interception to secure it is surreal.”

Justin Taylor led the Roadrunners with 108 yards on 17 carried and a touchdown. Sophomore quarterback Logan Malachuk threw for 245 yards and touchdown passes to Hayes and Edward McClain, Jr. and ran for two more scores. James Penley had four catches for 102 yards.

Brendan Flanagan added the final touchdown with 6:19 left in the game and Malachuk found Penley for what turned out to be the game-winning two-point conversion.

Peoria came into the game averaging 50 points per game with six games of 62 points or more. That included a 76-56 victory over Morris in the semifinals on Nov. 19.

Nazareth opened the season 2-4 – with losses to Lemont, Marist, Notre Dame, Carmel and St. Rita — and needed to run the table to get to the playoffs. The Roadrunners beat Leo, Montini and Benet to qualify for the postseason.

Once in the playoffs, Nazareth rolled over Glenbard South (48-22), Rockford Boylan (38-13) and Morgan Park (29-0) before surviving a tight 10-7 victory over Sycamore to get to Champaign. 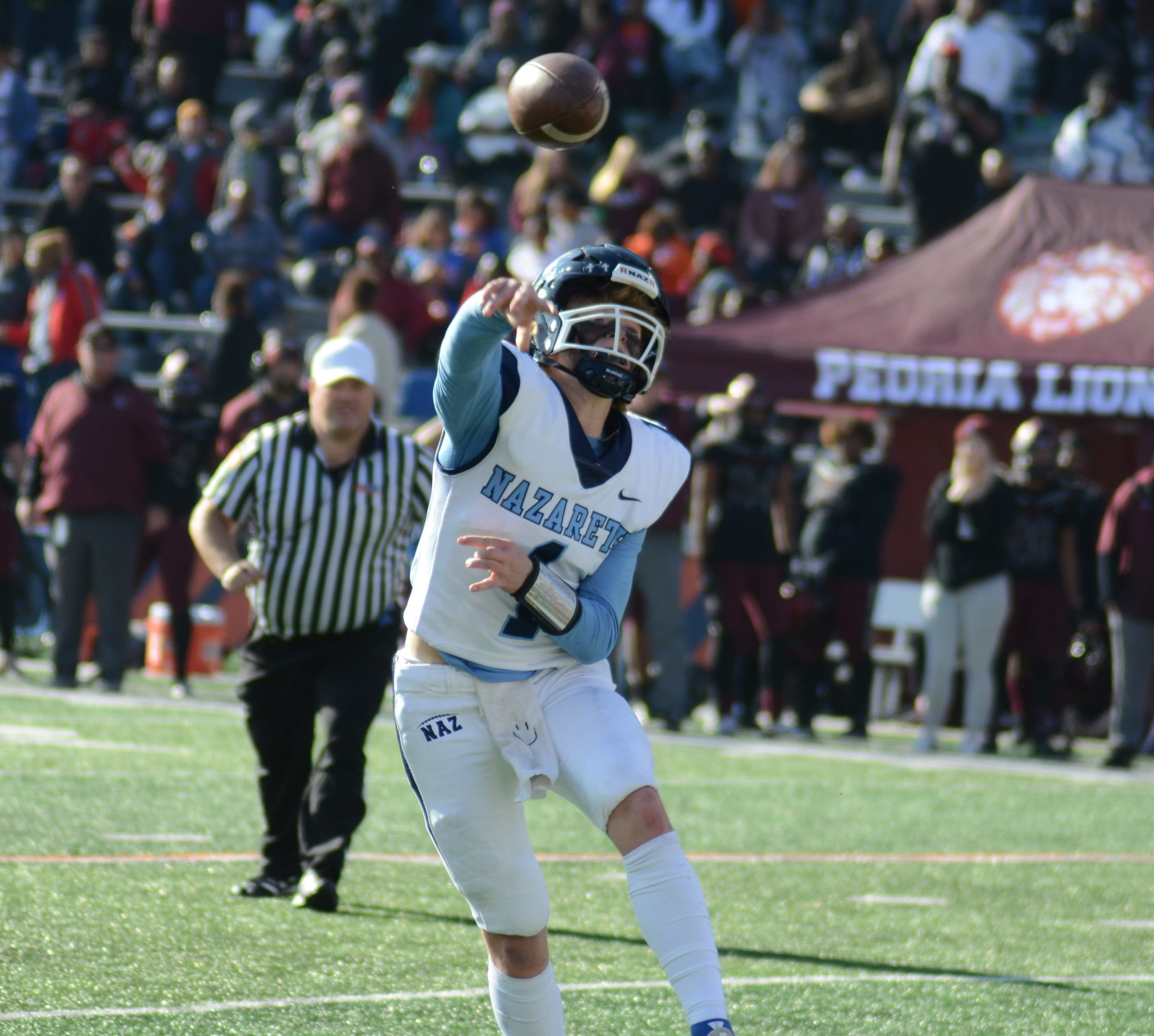 Nazareth sophomore quarterback Logan Malachuk throws for what turned out to be the game-winning two-point conversion in a 45-44 state championship win over Peoria. Photo by Jeff Vorva

“When we were 2-4, it was kind of quiet in the office and one of my assistants mentioned something about playoffs and I gave the best Jim Mora imitation. I just busted out laughing saying ‘Playoffs?!!?’ Everybody kind of got a kick out of it,” Racki said.

“We were just wondering how we were going to get into the playoffs. Let’s just work on win No. 3 first.”

The Roadrunner roster features just 13 seniors, and many underclassmen had their hands in this state championship. But there were growing pains early.

“Overall, we are a young team and it’s hard for kids and college players and even NFL players to go through a losing streak like that,” Racki said. “It’s difficult to maintain your confidence, faith, hope and keeping everything together. I was consistent with pointing out what we were doing well. I didn’t beat them up. They felt bad enough losing.

“Sure enough, once we started growing each day and we got that third win and fourth and fifth, you could see the confidence and the improvement in our play and our execution, and it just took off.”

Racki never imagined early on this team would bring home a championship, but felt pretty good after beating Sycamore in the semifinals.

“I’ve been blessed,” he said. “I was kind of in shock. It was a joy to see the kids after all of the adversity that they went through to be rewarded to a trip to Champaign.”

And a state title. 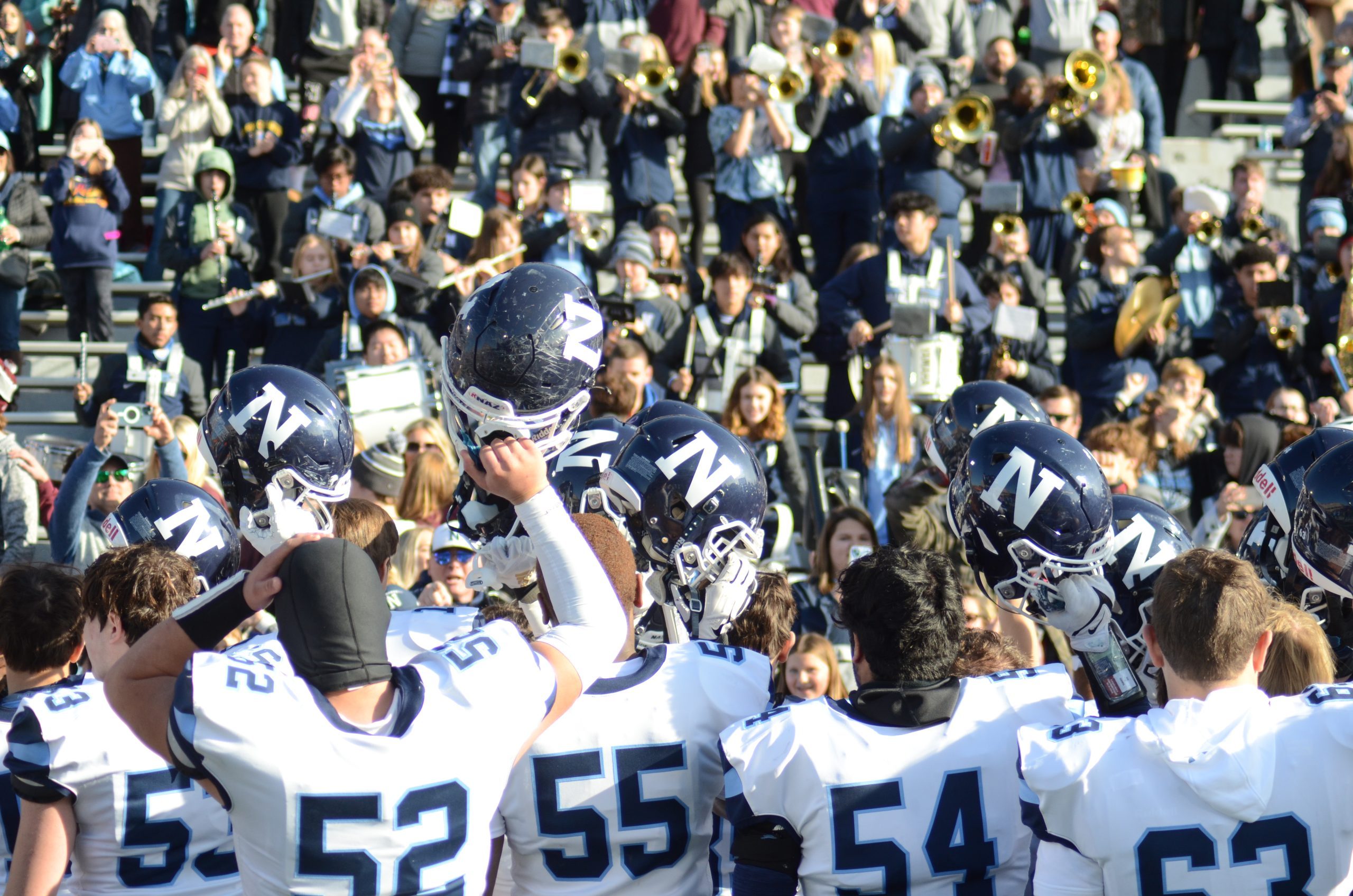 Nazareth players celebrate their Class 5A football title with fans and members of the band on Nov. 26. Photo by Jeff Vorva