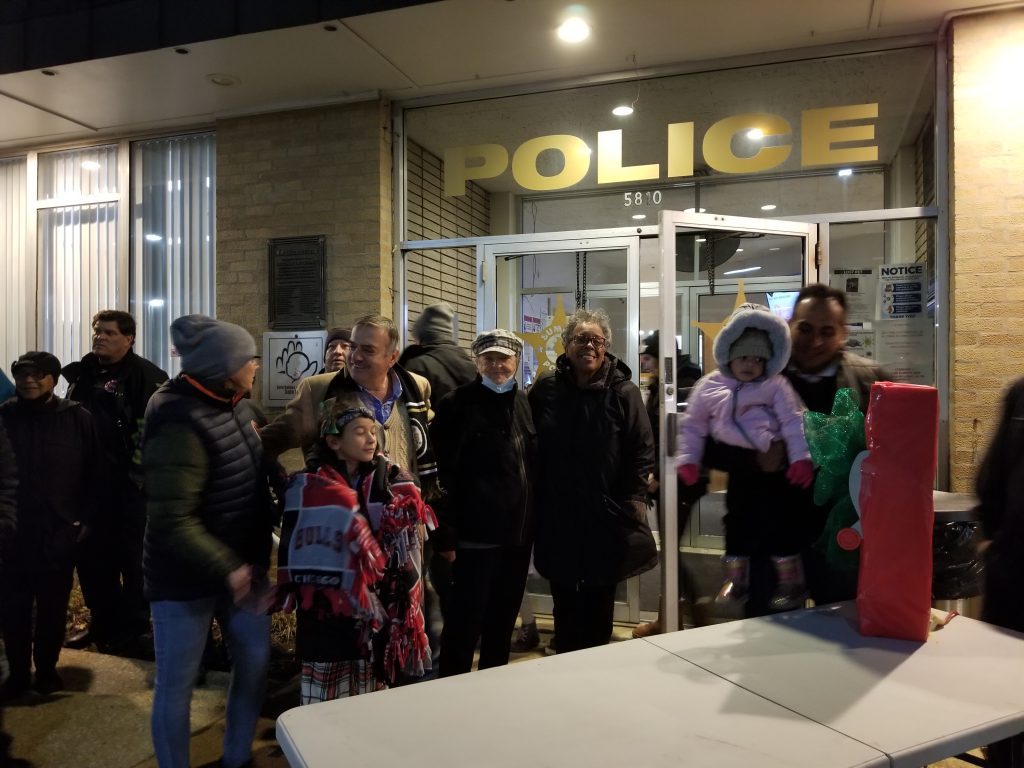 Summit officials and residents were on hand November 17 for the lighting of the village Christmas tree in front of the police station on Archer Road.

In what’s become an annual event the last couple of years, the tree is lit before the last Neighborhood Watch meeting for the year.

There is no Neighborhood Watch meeting in December. The next one will be on January 19 at 6:30 p.m. in the courtroom next to the police station.

The November 17 meeting was a good gathering for one of the first cold nights of the season.

Hot chocolate and coffee, along with doughnuts and cookies were available for those on hand for the tree lighting.

After the tree lighting, those who wanted to take part in the meeting came back inside.

Summit Mayor Sergio Rodriguez gave an update on some projects and things that are going on in the village. He noted that any work on streets and alleys that has started should be wrapped up in a few weeks.

The village is in the process of upgrading the alleys from gravel to cement. Rodriguez explained that it’s an ongoing project, and village officials strive to get at least three alleys done every year.

Rodriguez explained that the village is in good shape despite property taxes being collected late this year. Bills will arrive around December 1 and are due by the end of the year.

“With the tax bills going out late, that also means that the village gets its share late. I’m happy to report that Summit is in good financial shape. We haven’t had to raise taxes, and didn’t need to get any loans that are available to municipalities that may have needed help if they couldn’t get through without receiving tax money when they normally would.”

The mayor said Summit will once again have a holiday house decorating contest. If you, or someone you know has a home that’s decorated nice for the holidays, you’re encouraged to call the village hall and let them know.

The last Coffee with the Mayor for the year will be on December 3 at 10 a.m. at the village hall on 59th Street. They are in the process of setting up a schedule for 2023.

Trustee Aleco Julius mentioned that any tree planting is done for this year, and 50 more trees will be planted in 2023.

Julius said the Summit Santa Parade will take place once again on Saturday, December 10. The route is still being determined. You can check the village website or call village hall for updates on the route.

Trustee Art Sullivan discussed the importance of checking on your neighbors and the elderly who may need help during the colder months.

Sullivan also mentioned that it would be nice to help out neighbors who cannot get out to shovel snow themselves.

Summit Police Chief Mel Ortiz asked if anyone had any specific concerns that haven’t been addressed by the police department. There were no complaints.

Ortiz said it’s a great idea for everyone to be mindful of others during the holidays and cold weather season. He encouraged anyone that needed help to call the police department.

Fire Capt. Anthony Anderson reminded everyone to check the batteries in their carbon monoxide detectors. The village will start its smoke detector program again, when detectors will be available for single-family homes.

Summit Police Lt. Ed Zeman stressed to not leave keys in a vehicle that may be warming up as it’s prime season for car thefts when that’s being done.

Zeman also reminded everyone to not leave a purse or valuables on your front seat while gassing up your car.

Neighborhood Watch President Tula Beene said the Summit Lions Club will be disbanding due to lack of membership and the loss of members over the years.