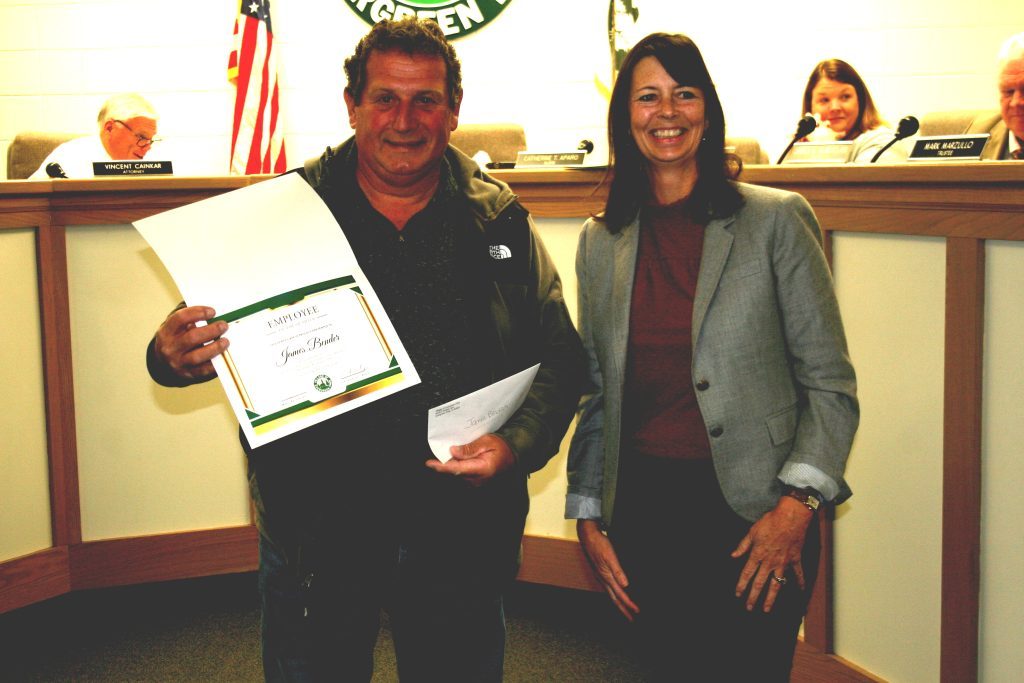 Mayor Kelly Burke presents a citation to James Bender, a 27-year employee of the Evergreen Public Works Department, for being selected as “Employee of the Quarter.”

The Evergreen Park Village Board took care of some local business before Thanksgiving Day meals will be served.

James Bender, a 27-year employee of the Evergreen Park Public Works Department, was selected as the “Employee of the Quarter” and honored at the village board meeting on Monday night.

Mayor Kelly Burke recognized Bender for his long-time service to the department and his ability to solve various problems that occur.

“He is a jack of all trades who can do everything,” said Burke before presenting a citation to Bender. “During a concert where the power went out, he was able to go up there and fix the problem right away.”

Burke received checks from Dorothy Novotney and Virginia Wrobel, members of the Evergreen Park Senior Citizens Council, during the board meeting. The two council members presented the checks to Burke and the village from funds raised from the annual “Memories to Go” village-wide garage sale that was held in September at Yukich Field.

Several Evergreen Park police officers received recommendations in their part for making an arrest of an individual who was part of a ring of thieves attempting to break into vehicles.

“Some of these folks were going around trying to open car doors,” Burke said. “Officers gave chase and apprehended a suspect, who also had a firearm. They made other arrests.”

Burke pointed out that actions of the officers prevented vehicle break-ins while arresting one of the individuals for gun possession.

“We are appreciative of the work of these police officers,” the mayor added.

The Evergreen Park Police Department is also initiating the “Walk and Talk” program for the holiday season. Officers will drop by businesses to prevent any possible crimes and talk to owners and employees.

“They will go throughout the retail area and visit the retail establishment,” Burke said. “It has been successful the past couple of years and we will keep at it.”

Trustee Mark Phelan thanked Beth Novotney, who is the director of the Office of Citizen Services, for her assistance in helping residents in need who are unable to pick up food from the village pantry on Fridays.

Phelan said that Novotney, who also serves as the president of the Evergreen Park Village Pantry Coalition, does so much to assist those who are unable to pick up the food in person.

“She has a bus driver who has a list of people who don’t pick up food Fridays at the food pantry,” Phelan said. “And they deliver the food to these people. I just want to thank Beth for doing that.”

A resolution was passed with unanimous support to accept a donation that will be presented to the Evergreen Park Fire Department. A resident recently died and in her will requested that about $15,000 be provided for the department.

Fire Chief Ron Kleinhaus also requested that a Genesis battery powered hydraulic rescue tool be ordered at a cost of $25,990 for the fire department. Kleinhaus made the request because the amount will rise after Dec. 1 and he wanted to keep it at the current requested rate.

Burke said that as a tribute to the late Evergreen Park resident Howard Selkie, who wanted all men and women who served in the U.S. military to be recognized, flags will be lowered on Wednesday, Dec. 7, in remembrance of Pearl Harbor Day.

A request to block off the east side of 95th and Lawndale to the alley and parking lot entrance of Barraco’s Pizza for the turkey trot fundraiser that will be held on Saturday, Nov. 26, was approved unanimously by the board.

A request by the police department for the annual membership/maintenance assessment to Northeastern Illinois Regional Crime Lab in the amount of $30,554 was approved.

A business certificate was awarded to Baso Tecnica PLLC, 9757 S. Kedzie Ave., a design firm and structural engineering center. Michelle Wood, LCSW, 3450 W. Maple, was approved for a license where she will be the lone psychotherapist.

Burke said that yard waste containers will continue to be picked up through Thursday, Dec. 15, weather permitting. Residents are requested to dispose of leaves and garden waste in the green yard waste containers. Only excess leaves should be raked to the curb or placed in brown paper bags.

The Dickens Christmas Festival and Annual Christmas Tree Lighting Ceremony will be held from 2 to 8 p.m. Saturday, Dec. 3, at the Community Center, 3450 W. 97th St. The tree lighting will occur at 6 p.m.

The free concert by Rich Daniels and the City Lights Orchestra of the “Sounds of the Season” will be held from 7 to 9 p.m. Sunday, Dec. 18, at Most Holy Redeemer Church, 9525 S. Lawndale Ave.

Tickets are available at the Evergreen Park Recreation Department, 3450 W. 97th St., or by calling 708-229-3373. Tickets can also be purchased by sending an email to [email protected]

The Evergreen Park Village Hall, 9418 S. Kedzie Ave., will be closed Thursday, Nov. 24, and Friday, Nov. 25, in observance of Thanksgiving.