Jaeden King of St. Xavier gets ready to score one of his 39 points against Trinity Christian College on Nov. 30. Photo by Jeff Vorva

The transfer portal is turning college athletics upside down, and Saint Xavier men’s basketball coach Robert Ford is enjoying it.

And taking advantage of it.

Jaeden King came to SXU in 2021 after transferring from NCAA Division II Tiffin University. Prior to that he played at Western Illinois.

The top five scorers on the Cougars roster are transfers from either junior colleges or four-year schools.

“This is the trend and the way things are going, and I’ve kind of embraced it,” Ford said. “I’ve had stops as a [junior college] coach and Division II coach. I’ve been recruiting transfers and I’ve had transfers and people recruiting my guys, so I know what to look for with guys coming from good programs and coaches that I respect giving good recommendations.

“You do your due diligence, and you go from there. It’s working out for us so far.”

Through 11 games, the Cougars were 8-3 with a 6-1 mark in the Chicagoland Collegiate Athletic Conference.

King, a 6-foot-6 senior guard with a year of eligibility after this season, went wild against Trinity (3-5, 1-4), hitting four 3-pointers early in the game and closing the game with two slam dunks.

“Last year, he had a rough go with an ankle injury,” Ford said of King. “He had a good summer working on his game, came in focused this season and it’s paying off.”

“[King] had a career night and I give all the credit to him — he played well,” TCC coach Jason Hawkins said. “We have to tighten up our defense. We played hard and our effort was there we just have to play better defensively.” 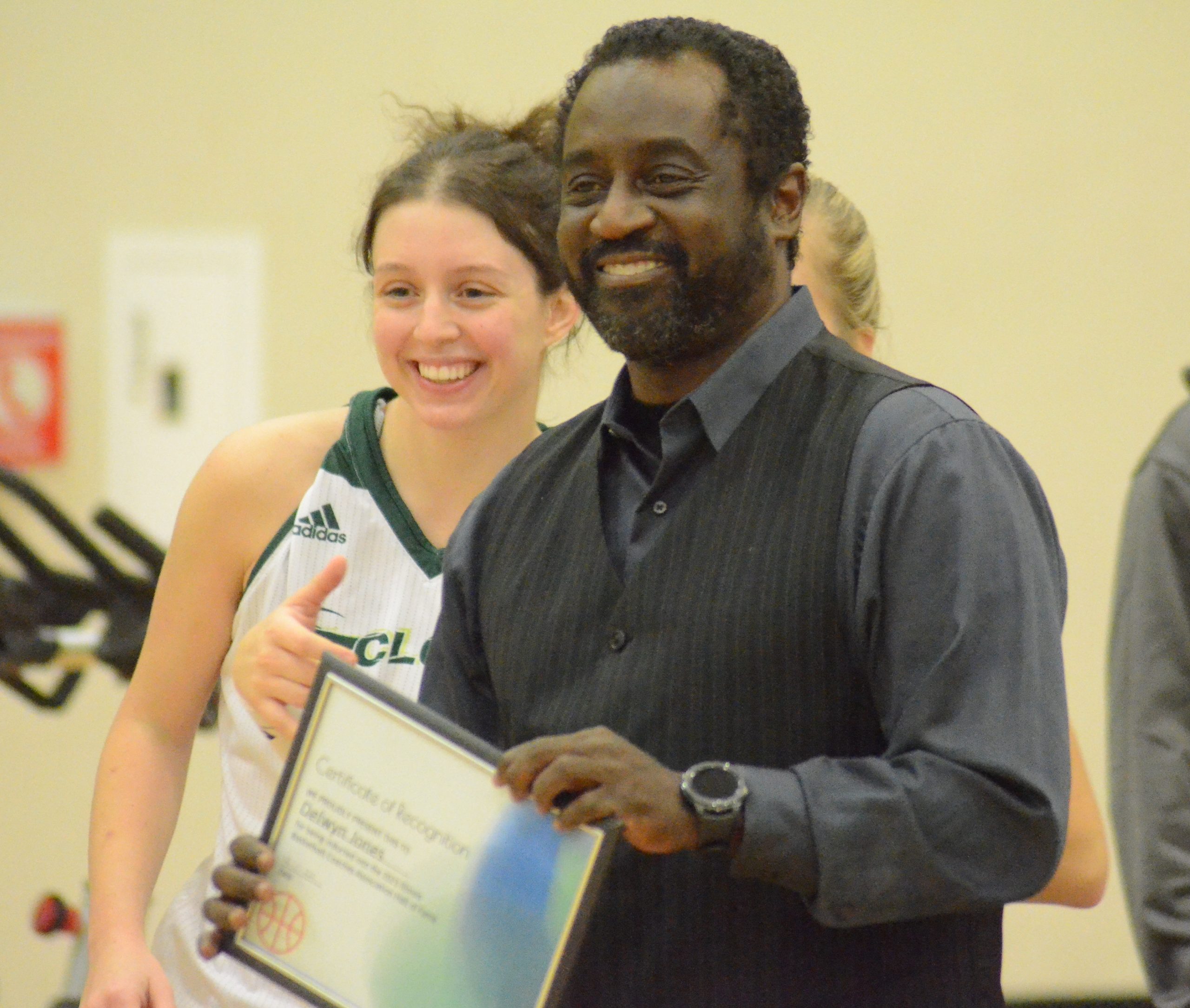 Moraine Valley women’s basketball coach Delwyn Jones was presented with an award on Thursday for earning a spot in the Illinois Basketball Coaches Association Hall of Fame. Photo by Jeff Vorva

“I want to thank the Illinois Basketball Coaches Association for not only honoring me but more importantly for looking at the junior college level,” Jones said. “A lot of times organizations don’t value the juco level and there is a very good basketball here.”

This is Jones’ 23rd season with the Cyclones and has racked up more than 400 victories and led the team to two National Junior College Athletic Association tournament appearances. 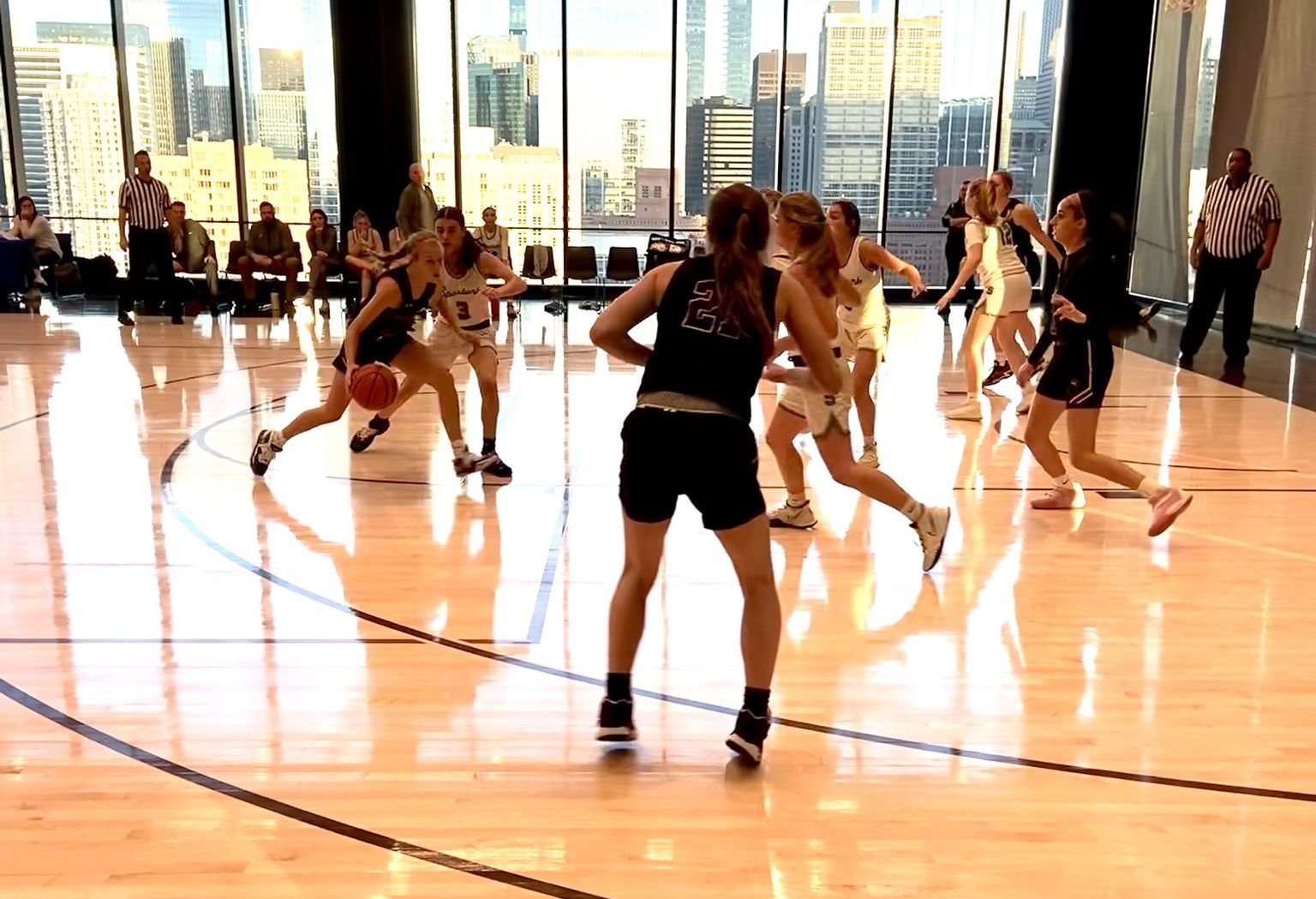 Sandburg and Oak Lawn play with the Chicago skyline in the background on Saturday at the 167 N. Green St. facility in the city. Photo courtesy of Sandburg High School

The Eagles won the non-conference matchup, 47-39. The game was played on a court with one side of the gym enclosed in windows and offering a view of the Chicago skyline.

Climbing steep Hill
Fresh off an impressive victory over Mount Carmel to win the Spartan-Ram Classic, Oak Lawn took on the Association Press’s No. 5 Class 3A team in the state, Hillcrest, in a South Suburban Conference crossover game.

The Spartans (5-1) were within seven points of the Hawks heading into the fourth quarter but fell, 69-53.

Both powerhouses are in the East Suburban Catholic Conference. Their league showdown opens the 2023 portion of the schedule in style with a Jan. 4 meeting in LaGrange Park.

Last year, the Roadrunners finished second in the state in Class 3A.