Skip to content
December 5, 2022/Comments Off on Political sands shifting

Among local candidates filing petitions on the first day of filing was 13th Ward Ald. Marty Quinn, expected to run on a record of economic development, support for public safety and delivery of services to constituents. --File photo

The political sands of mayoral politics shifted last week, leaving many in Clearing and Garfield Ridge asking “What next?” questions.

Garfield Ridge native Lopez worked the neighborhoods hard since he announced his mayoral candidacy back in April.

His law-and-order stance and sharp criticism of Mayor Lori Lightfoot appeared to endear him to many in a part of Chicago angry over what some describe as out-of-control crime.

But with Lopez withdrawing in favor of running for re-election as an alderman, some who supported him have started shopping for like-minded mayoral candidates. 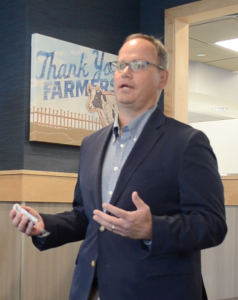 Among local candidates filing petitions on the first day of filing was 13th Ward Ald. Marty Quinn, expected to run on a record of economic development, support for public safety and delivery of services to constituents. –File photo

That may be a tall order with the field of candidates largely populated by political liberals who don’t appear to have crime fighting at the top of their to-do list.

One who may stand out is former Chicago Public Schools CEO Paul Vallas, who has openly courted Lopez supporters in the last week.

“Alderman Raymond Lopez has been voicing two things foremost in the minds of people across the city — fear of the rampant crime plaguing all of our communities, and Lightfoot’s incompetence in addressing them,” Vallas said on social media. “I appreciate his direct approach, especially around the need to support Chicago’s understaffed and overworked first responders.”

That may play well in Clearing and Garfield Ridge, which have relatively high numbers of law enforcement families, as well as a strong number of city workers.

On the other hand, in the mayoral election of 2019, candidate Lori Lightfoot won every precinct in Clearing and Garfield Ridge, in her one-on-one battle with Cook County Board President Toni Preckwinkle. While the mayor’s supporters in the area are not vocal, they will doubtless show up to the polls on Feb. 28 and vote for Lightfoot, who is running for a second term.

Who will be supported by the area’s two aldermen, Marty Quinn (13th) and Silvana Tabares (23rd), remains to be seen. Tabares had thrown her political lot in with Lopez, but has not recently said anything about the race going forward. Quinn, much like his political mentor (former Illinois House Speaker and current 13th Ward Democratic Committeeman Michael J. Madigan), is keeping his views close to his vest, at least for now.

In the 13th Ward, Quinn filed his nominating petitions promptly on Nov. 21, the first day candidates could file.

Also filing on the first day was Garfield Ridge resident Paul Bruton, a former employee of the Chicago Office of the Inspector General.

Two other candidates who have announced but had not yet filed as of last Thursday were Garfield Ridge resident Jason Pullappilly, a CPD detective running as an advocate of public safety; and Clearing resident Paul “Paulino” Villarreal Jr., who lost a head-to-head race to Tabares in 2019, when he lived in the 23rd Ward. Villarreal owns a private security firm headquartered on Archer Avenue.

In the 23rd Ward, as of last Thursday, only Tabares had filed petitions. West Lawn community activist, a member of Madigan’s political organization who had announced his candidacy, had not yet filed.

Exactly who files nominating petitions next month and exactly who survives the nearly inevitable legal challenges remains to be seen. But the next 100 days are certain to bring a flurry of political activity in Clearing and Garfield Ridge.

Also on the ballot are candidates running for police councils created as a result of police reform legislation passed by the City Council last year. There will be a council in each district. Clearing and Garfield Ridge are part of the Chicago Lawn (8th) District.

Filing petitions last week for the council was Garfield Ridge resident Al Cacciottolo, a Streets and Sanitation official who also serves as president of the Garfield Ridge Neighborhood Watch; Scottsdale resident Jason Huff, a city Department of Finance supervisor who also serves as president of the Scottsdale Neighborhood Watch; and Mark Hamberlin, an Ashburn resident who describes himself as a Teamsters Local 781 steward and a referee of youth sports on the Southwest Side.