Skip to content
December 15, 2022/Comments Off on Avis car rental and a day care center are coming to Countryside 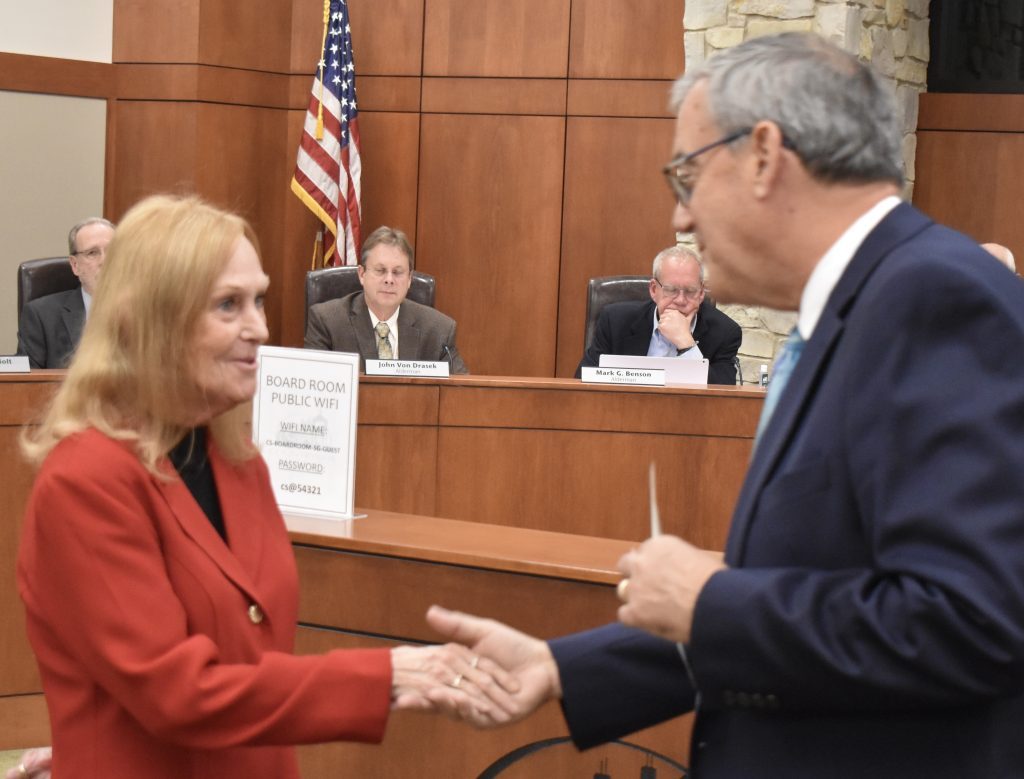 Countryside Mayor Sean McDermott congratulates Karen Melone after she was sworn in as deputy clerk for December. (Photo by Steve Metsch)

A car rental company and a day care center/nursery school are coming to Countryside.

The city council – at its only meeting in November – approved an ordinance that creates the special use variation needed to permit Avis Budget Car Rental at 9665 W. 55th St.

That’s the address of Highline Automotive, which will share about half its current space with Avis, City Attorney Erik Peck said during the council’s meeting of Nov. 9.

The council approved a slight reduction in perimeter landscaping for the site for construction of an access drive.

Peck said there were no objections heard at the zoning board of appeals meeting.

The council also approved a special use variation for Angel Smith Woods to operate a day care center/nursery school at 6525-6535 Joliet Road.

The business will be called Creative Academy, Peck said.

In other business, Karen Melone was sworn in as deputy clerk by Mayor Sean McDermott. Her tenure will only be for the month of December, he said.

Extra help is needed in the clerk’s office in anticipation of petitions being field for the upcoming municipal elections in April, the mayor said.

“Karen does an outstanding job for us in the clerk’s office and has been with for 13 years,” he said.

McDermott congratulated those who won elections on Nov. 8, and planned to invite them to an upcoming “Coffee with the Mayor” event to meet residents.

“We’re looking forward to working with them and addressing our concerns in Springfield,” McDermott said.

The council approved hiring a maintenance worker for the Department of Public Works. Chances are that worker will be busy spreading some salt used by the city this winter.

The council approved a bulk salt purchase from Cargill Inc., for $71.38 per ton through the State of Illinois Joint Purchasing Program.

They are often used to detect stolen license plates, he said, and have proven valuable crime fighters.

“We can go online, look at other plate readers and find where it’s hitting consistently, or (find) stolen cars from our jurisdiction,” Ford said “They’re a vital tool.”