Skip to content
December 17, 2022/Comments Off on Nazareth student athletes commit to colleges 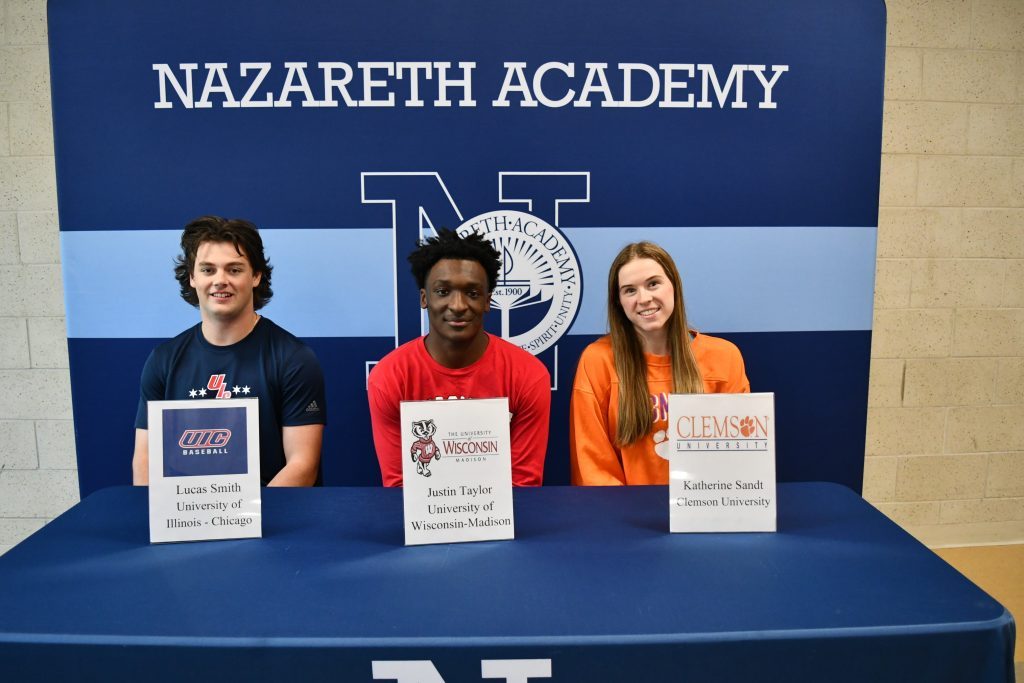 In conjunction with National Letter of Intent Signing Day, Nazareth Academy announced that student-athletes from the Class of 2023 have officially committed to continue their academic and athletic pursuits at the college level with three Division I commitments.

Katherine Sandt (Western Springs) will pursue her academic and Volleyball career at Division 1 Clemson University. A 4-year Varsity starter, Kitty was part of the historic Nazareth State Champion team in 2021 and has earned numerous honors, including recording over 1,000 career assists and ESCC All Conference recognition in 2021 and 2022. Her AVCA honors include the All American Watch List, 2022 Best & Brightest, 2022 All Region, and 2022 All State.

“It’s hard to think of Nazareth volleyball and not think of Kitty,” said Coach Melissa Masterson. “Kitty has had a giant impact on our program’s success. She is the epitome of an athlete who sacrifices and devotes so much of her time to being the best athlete and teammate she can be. Kitty has really stepped up this past season to become a strong leader and even better player.”

Kitty is an honors student and Illinois State Scholar who is actively involved in the fuller life of Nazareth Academy. In committing to Clemson, Kitty said, “The amazing coaching staff welcomed me from day one and I already know many players going in. Clemson volleyball is known for having a great Chicago connection so I knew I would feel at home. When I stepped onto the amazing campus I knew that it was the perfect place to be my home for the next four years. Finally, Clemson has an amazing academic reputation and I am looking forward to continuing my studies there.”

Lucas Smith (Hinsdale) will pursue his academic and Baseball career at Division 1 University of Illinois at Chicago. A 4-year Varsity starter, Lucas tied the school record with 17 doubles in 2022 and was part of the team that claimed Nazareth’s first Baseball State Title that season, when he was also recognized with an All State selection. He earned ESCC All Conference in both 2021 and 2022.

“His work ethic and leadership are apparent in the classroom, weight room, and on the diamond,” said Coach Lee Milano. Lucas is excited to be part of a growing program at UIC. “Its status as an upcoming program, the great coaching staff and the proximity to home all led to my decision to continue my playing career there,” he said.

Justin Taylor (Broadview) will pursue his academic and Football career at Division 1 University of Wisconsin Madison. As a 4-year Varsity letterman, Justin has made a huge impact on the Football program. He is a 2-time All Conference selection CCL/ESCC, was an All Area selection in 2021 and has been a Team Captain for the past two seasons.

“Justin’s talent and work ethic as a football player were obvious to me the first day he practiced with the varsity team as a freshman,” said Coach Tim Racki. “However, I am most proud of the legacy he has created as a leader within the program. Whether at practice, during a game, or in school, Justin is always a positive vocal leader who demonstrates focus, confidence, selflessness and loyalty to his teammates. His energy and leadership are infectious and a key element to our success.” Justin is excited to continue playing in college. “I chose UW-Madison because they exemplify the values that I have learned and have fallen in love with. I learned these values through life experiences and my time at Nazareth Academy. These values are the reason I am successful today.”

Several other members of Nazareth Academy’s Class of 2023 have verbally committed to continue their student-athlete careers at the college level and will be celebrated in conjunction with NLI Signing Days in February and April.