Skip to content
December 23, 2022/Comments Off on Frog gone but Clifford still brings money and cheer to charities 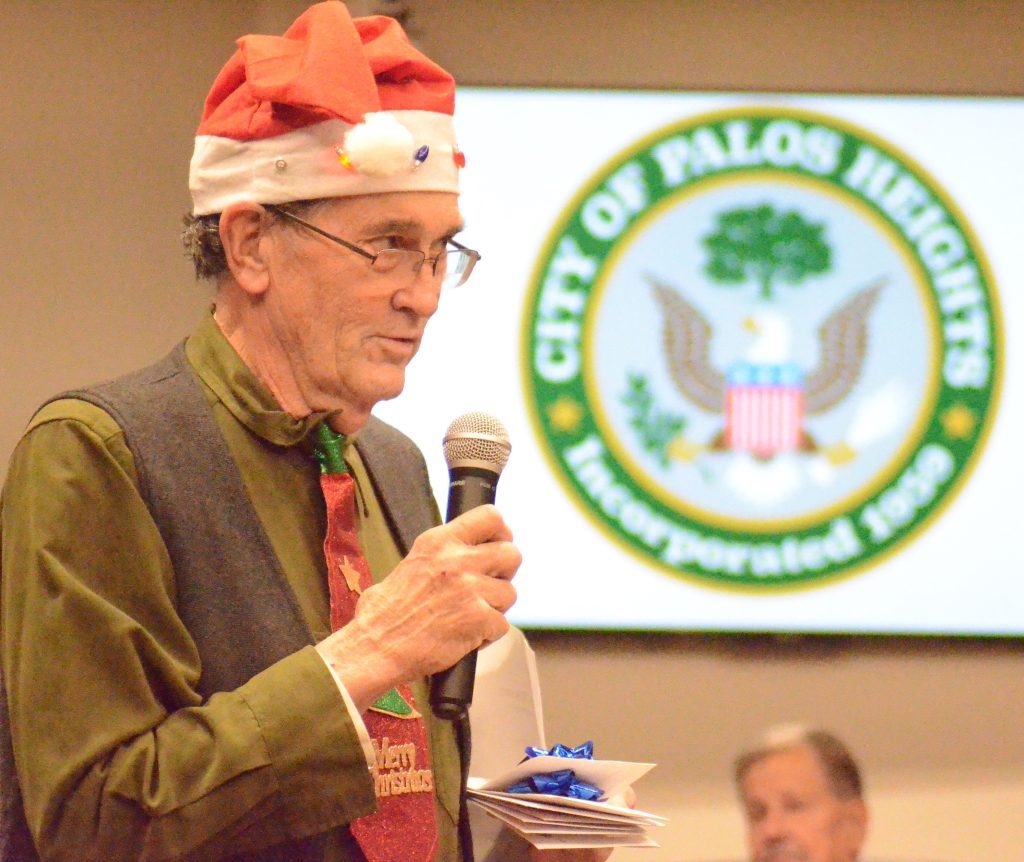 For the second year in a row, Froggy was missing.

Palos Heights Alderman Jack Clifford’s annual presenting of checks to worthwhile organizations during the final meeting of the year used to feature Clifford with a frog puppet to help him out but, alas, this year Froggy was misplaced.

There may not have been a green frog helping him out, however, there was some green to be given away by Clifford at Tuesday night’s city council meeting at City Hall.

Clifford works with several organizations, including the Palos Lions Club, the City Council plus friends to provide the money for charity.

The 2022 bundle featured $200 worth of gift cards for the Sertoma Center in Alsip, a check for $750 for LaRabida Children’s Hospital and $1,100 to the Palos Heights Police Department.

“The police are building a bench for our officers that have served – past and present,” Clifford said. “This is to remember their service to the community. The police are near and dear to our heart.”

Mayor Bob Straz was appreciative of the gift to Sertoma.

“I’ve had the good fortune of serving on the Sertoma board for about 45 years or so and I’ve been president for about 30 of those,” Straz said. “We provide services for developmentally disabled adults and we have nine group homes, which are community integrated living arrangements throughout the south and southwest suburbs.

“That’s in addition to two 16-unit supportive living operations – one in Homewood and one in Orland Park. A couple of weeks ago, we got approved to build a third one in Alsip. We’ll use this money to get some Christmas dinners for these people, many are on a fixed income.”

Straz said that snow, cold and 50 mph winds that are forecast to arrive Thursday will likely be a problem in the coming days.

He wanted residents to keep in mind that there is no parking in the streets during the snow event.

He said the Palos Heights Recreation Center, 6601 W. 127th St., will serve as a warming center.

He also implored that residents pay attention to their neighbors to make sure everything is all right – especially if they are elderly or frail.

“This is the time we all get together as a city and make it work,” Straz said. “You have to be here for everybody else. Keep that in mind going forward. Hopefully it won’t be the event they are talking about but sometimes they [weather forecasters] are right.”

Third Ward Alderman Brent Lewandowski, however, will have some competition to retain his seat. George Popelka, who unsuccessfully challenged incumbent City Treasurer James Daemicke in 2021, is vying for Lewandowski’s spot.