Skip to content
January 2, 2023/Comments Off on McCook Village Hall gets a puppy 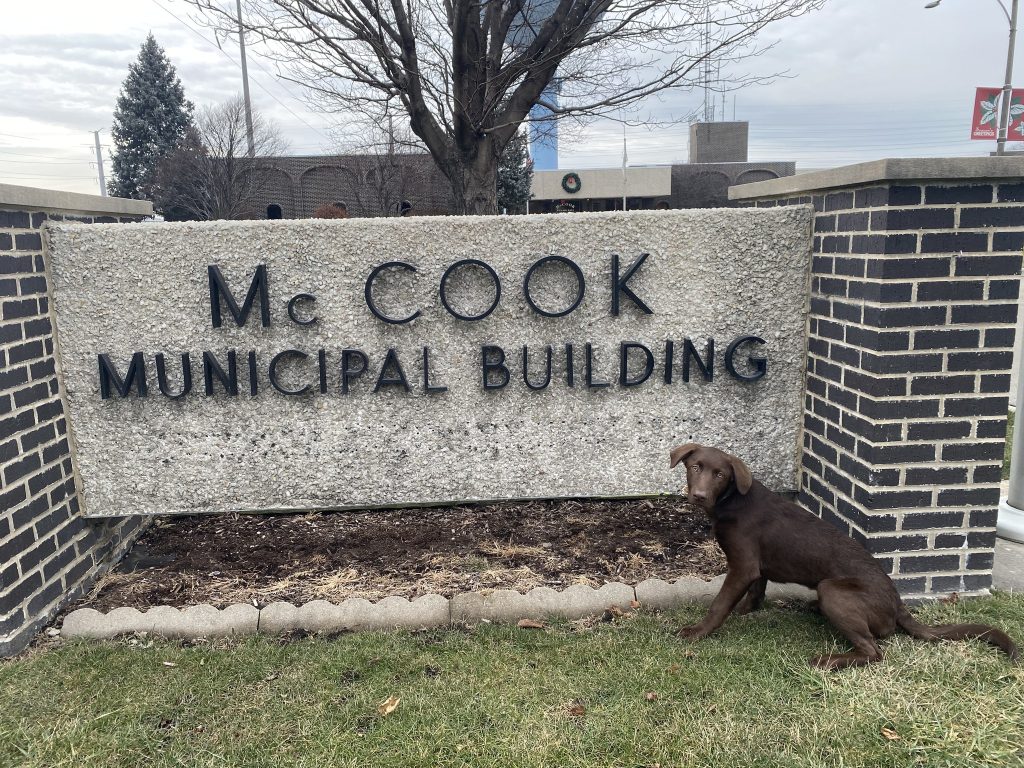 McCook Village Hall gets a puppy

If any residents have a bone to pick at the McCook Village Hall, they will soon have competition.

The village hall is getting a new resident, Coco, a chocolate Lab puppy that’s being billed as the “Village Ambassadog.”

The village board on Dec. 19 voted unanimously to spend $400 to buy a rescue dog from a shelter in Peoria, Mayor Terrance Carr said.

Part of the money will be used to have Coco spayed.

The pooch will live in the village hall, and already has beds waiting in various offices, Carr said after the meeting.

Coco is expected to make its main residence in the fire house that is part of the same building.

Why does McCook need a dog?

“Staff came to us a couple of months ago and asked if they can get a comfort dog for around the village. I said I’d be on board with it as long as we get a rescue dog,” Carr said.

“They’ve been chomping at the bit, asking me for a couple of months,” he said. “So, we ended up rescuing a chocolate Lab out of Peoria. We’ll get her on the 27th (of December).”

The plan is for the dog to have free rein in the village hall “because a dog cheers everybody up,” he said.

“Wherever the dog wants to go, the dog goes. It’s going to be the best rescue dog in the world after we’re done spoiling it,” Carr said.

Her name was selected on Dec. 23 from a list of names submitted by village employees.

Coco will attend village board meetings, he said.

“Maybe it will run the meetings,” Carr quipped.

Coco will be in the village hall for a couple of weeks before being it is sent out for three weeks of training.

A dog lover, Carr said he’s had dogs “all my life.”

“We have a golden doodle named Buddy. He’s my buddy,” the mayor said. Another pet dog recently had to be put down, he said.

The board approved another new addition, hiring Marcelo Perez Jr., as a police officer.

Perez, 31, has worked the past four years as a police officer in Morton Grove.

Moving to McCook gets him closer to home, said Perez, who grew weary of the 40-minute drive to Morton Grove.

His first day with McCook will be Jan. 2.

Asked why law enforcement is his chosen career, he said: “I like different scenarios and serving people. … Nothing is every the same, never routine. … Selfless service.”

Perez spent six years with the Army – stationed three years in Italy – and for the past five years served in the Army Reserve with the rank of sergeant.

Perez said he grew up wanting to be a police officer.

His father, also named Marcelo, is currently a sergeant with the Forest View Police Department.

The board approved increasing the fine from $150 to $750 for anyone found stealing water from the village.

“We’ve been catching a lot of them lately, so we’ll increase the fine on it,” Carr said.

The board usually meets on Monday evening, but the village hall is closed Jan. 2 to observe the New Year’s Day holiday.