Skip to content
January 11, 2023/Comments Off on Paving a path to the pros? 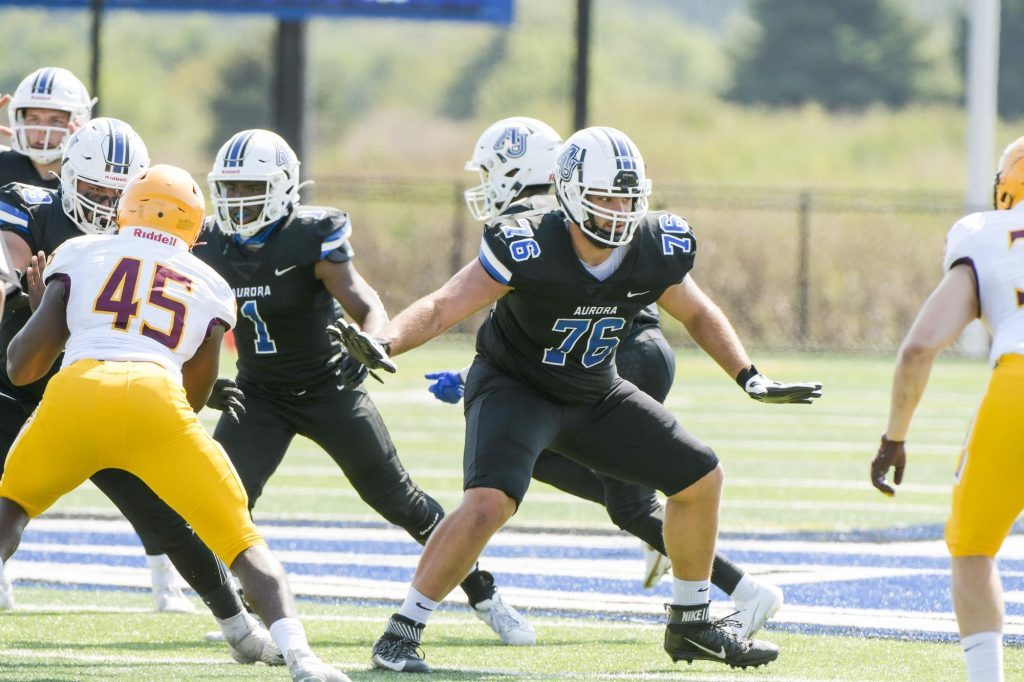 Chris Toth was a two-year starter at Aurora University, where this season he earned Associated Press Division III All-American honors, among other accolades. Photo provided by Aurora University

Paving a path to the pros?

When your father is able to list blocking for Hall of Fame quarterback Dan Marino on his resume, chances are pretty good that football is a strong component of your family’s lineage.

Such is the case for Aurora University offensive tackle Chris Toth.

The 2017 Sandburg graduate in December completed his playing career for the Spartans in memorable fashion.

A two-year starter at left tackle at the NCAA Division III school, the 6-foot-6, 315-pound Toth was one of four Spartans chosen to the 2022 D3football.com All-American Team, with Toth garnering First-Team accolades.

Earlier in the postseason, Toth was named to D3football’s All-Region First Team and the Northern Athletics Collegiate Conference’s All-Conference First Team. He also earned recognition from the American Football Coaches Association and was an Associated Press Division III All-American.

Toth anchored the line for an offense that averaged nearly 472 yards per game (204 rushing and 268 passing) and was second in Division III in scoring at 46.1 points per game. He finishes his collegiate career with four All-American awards — three in 2022 and one in 2021 from D3football.

Aurora was 11-2 overall this season and 8-0 in conference while winning the NACC championship. The Spartans advanced to the quarterfinals of the Division III playoffs before losing to Wartburg on the road 45-17.

“It was a good year,” Toth said. “I felt really good and I had a good offseason. I’m in the best shape of my life and it paid off. We jelled really well and the season was very successful.

“The accolades are very cool, but I wasn’t thinking about them during the season. That was way secondary to winning as a team. We moved the program a few steps ahead and that was most meaningful for me.”

Toth mentioned the Spartans’ 33-28 victory over Wisconsin-Whitewater in the opening round of the playoffs as one of the season’s most memorable moments.

“That was insane,” he said. “I’ll take that over accolades any time, for sure.”

Toth’s dad, Tom — also a Sandburg alum — played college ball at Western Michigan and was selected in the fourth round of the 1985 NFL draft by the New England Patriots. He appeared in 51 NFL games (18 starts), playing from 1986-89 with the Miami Dolphins and 1990 with the San Diego Chargers.

“Oh, yeah,” the younger Toth said. “It’s been a dream of mine my whole life. Football has always been my No. 1 sport even though I played other sports.

“I’m just trying to figure out what my next move is and talk to [Aurora head coach Don Beebe] and my coaches. I thank them for helping make this possible in any way they could. It almost feels surreal because I’m almost right there. I still remember my first practice as a freshman and I’m lucky to have this opportunity to show what I can do and get to that next level.”

Beebe was a wide receiver who played 116 games in the NFL from 1989-97, most notably as a member of the Buffalo Bills teams that lost four consecutive Super Bowls from 1990-1993. He also played for Carolina and Green Bay, winning a Super Bowl ring with the Packers in 1996.

Beebe believes Toth can play on Sundays in the future.

“There’s no question,” he said. “He’ll be on an NFL roster and in (training) camp with someone.

“Chris obviously has the size and he passes the eye test when he walks through the door. He has great length and very long arms, which are vital for a tackle. He’s a professional.

Toth will play in the Hula Bowl on January 14 at the University of Central Florida in Orlando.

Beebe said Toth needed to improve his foot speed — which he did — and “being nasty.”

“It’s like when you’re the younger brother and your older brother wants to fight,” he explained. “Instead of blocking a D-3 guy, imagine you’re blocking (NFL defensive end) Robert Quinn every day in practice.

“The NFL scouts are looking for a guy who finishes. The first block might be great, but what they want to see on film is when a guy finishes a guy and drives him into the turf.”

The Hula Bowl, which will kick off at 11 a.m. and be televised by the CBS Sports Network, will feature many players premier Division I programs. Joining that group will be the young man who played four years of basketball and two years of volleyball, in addition to four years of football at Sandburg, before experiencing a high degree of success in college.

“It’s amazing,” Toth said. “I feel D-3 football maybe doesn’t get the respect it should. People need to respect that level because these are good guys that I’m going against each week.

“I want to help the guys after me to do the same thing. It’s awesome to see this interest in D-3 guys.”