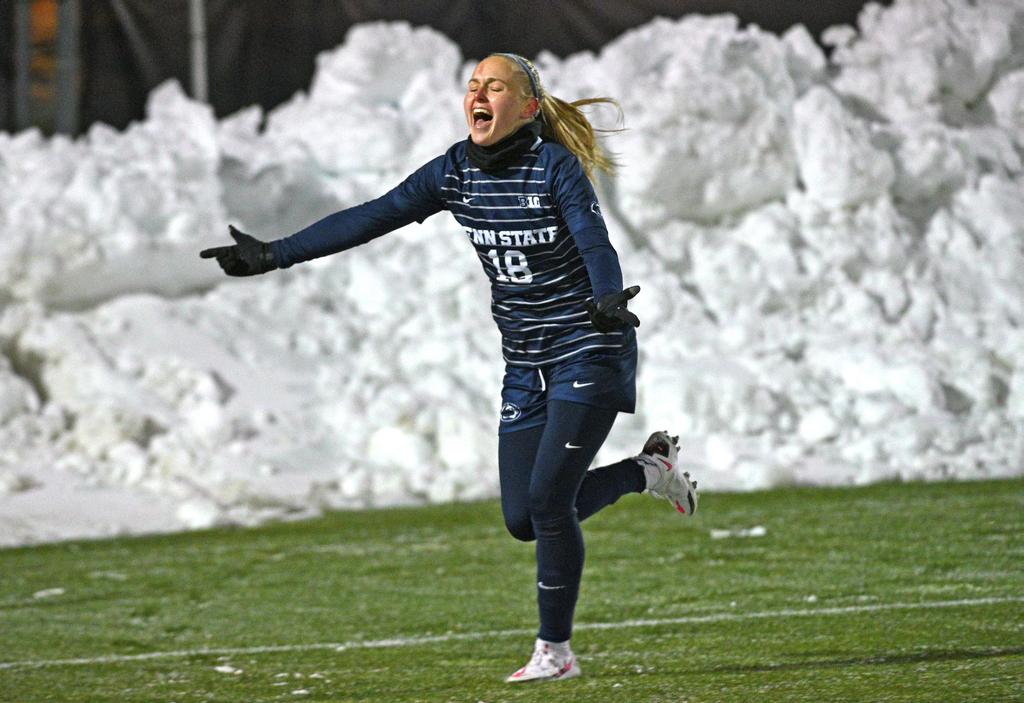 Penelope Hocking of Penn State was taken in the draft in the first round by the Chicago Red Stars. Penn State photo

For the past couple of months, the Chicago Red Stars watched player after player leave without replenishing the roster, which was down to 17 players.

That changed last week, with the team drafting four players (who must still be signed) and adding two waiver-wire pickups.

A look at the new players:

• The team picked Penn State forward Penelope Hocking in the first round (seventh overall) of the NWSL Draft on Jan. 12. Hocking played in 23 matches (22 starts) last season, scored seven goals and recorded 11 assists last season. The California native was a Big Ten Offensive Player of the Week, was named to the Second Team All-Big Ten and awarded All-North Region Honors.

Hocking transferred to Penn State from USC, where she became the Trojans’ all-time leading scorer by scoring 48 goals, breaking a mark which had stood for 21 years.

On the international level, Hocking played for the U-20 U.S. Women’s Youth Team and competed in the U-20 World Cup in France.

• The Stars chose Oklahoma State midfielder Grace Yochum in the second round (14th overall). In her five-year college career, she played in 86 matches (83 starts), scored 41 goals and made nine assists. During that time, Yochum was named to the United Soccer Coaches All-Midwest Region Second Team (2021), was an All-Big 12 First and Second Team choice, and made the Big 12 All-Freshman Team.

• Another Penn State player, forward Ally Schlegel, was the 23rd overall pick. Schlegel played in 85 matches (83 starts), scored 47 goals and assisted on 20 others. The forward was part of the U.S. U-23 Youth National Team that played against Chicago in a 2022 preseason tournament in Portland.

• Duke midfielder Sophie Jones was the No. 43 pick in the draft. In four years at for the Blue Devils, the California native played in 75 matches (all starts), scoring five goals and registering eight assists.

• Midfielder Addie McCain was picked off the waiver wire and inked to a two-year deal with a one-year option.

“Addie is a young and talented player. She has the ability to both score and create goals,” Red Stars coach Chris Petrucelli said.

In 2022, McCain played in 10 matches for the Kansas City Current during the 2022 NWSL regular season, starting three. The midfielder played in seven matches during the 2022 Challenge Cup and scored her first professional goal against Racing Louisville.

• Forward Jenna Bike was also picked up off the wire and signed a two-year deal with a one-year option.

Bike joined Gotham FC last season as a national team replacement player. Following the return of their national team players, Bike was released and re-signed to a contract through the end of the 2022 season.

As a member of Gotham, Bike played in nine matches. She made her NWSL debut July 2 at Red Bull Arena in a match against the Red Stars.

“Promoting Michelle to general manager was an easy decision,” said Red Stars chairwoman Kim Vender Moffat. “Her professionalism, work ethic and experience as both a former Red Star player and in the corporate sector make her uniquely qualified to lead soccer operations for the club.”

“I’m grateful for the opportunity to head up the soccer operations for the Chicago Red Stars,” Lomnicki said. “For over 14 years, this organization, the players, the staff and the fans have been home to me.

“It’s where I started and ended my professional playing career, it’s where I met my husband and started our family. While I’m not originally from here, half of my life has been spent living as a Chicagoan and knowing how championship-hungry fans are in this great city.”

Ella Masar was named as an assistant coach. Masar is an Illinois native and former Red Star player who played in 20 games for the team in 2013, scoring three goals with two assists.

“Ella has spent over a decade in professional soccer, both as a player and a coach,” Lomnicki said. “She is incredibly detailed in her approach, and passionate about player growth. We are excited to welcome her back home.”

“You know, they say, there is nothing quite like coming ‘home’ and, after leaving Chicago … just over 10 years later, I can’t wait to do just that,” Masar said.

Penalties
The NWSL issued penalties and bans to players and individuals who were a part of investigations into verbal and sexual abuse of players.

Former Red Stars coach Rory Dames and three other ex-coaches have been banned by the league.

The league also fined the Red Stars $1.5 million and will work with owner Arnim Whisler to sell the team “in an expeditious and appropriate manner.”