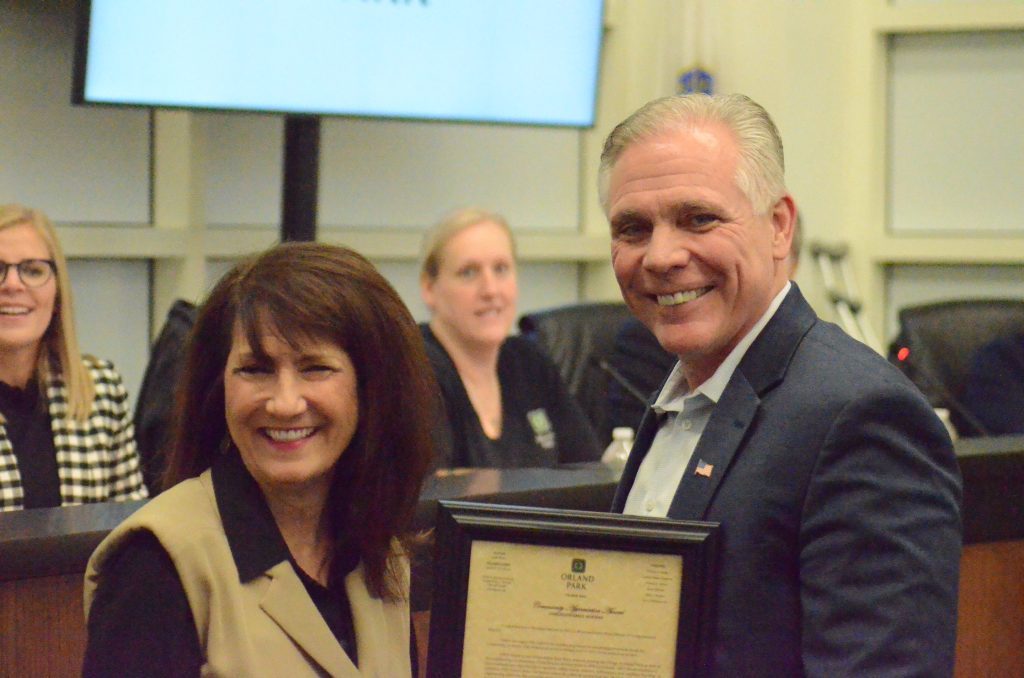 When Pekau, a Republican, announced he was running for Congress in November 2021, he lumped the Democratic Newman in with Sean Casten and Nancy Pelosi and said they “put special interests, party politics and extreme far-left agenda ahead of doing what’s best for the people they represent.”

Occasionally, however, he had praise for Newman when she represented the 3rd District the past two years. When she helped come through with allocating millions for the final phase of the 143rd Street project in June 2021, Pekau was thankful for her role.

“Everyone knows we have had our issues,” Pekau said. “I want to thank Congressman Newman for going to bat for her constituents, which includes us.”

After redistricting, Orland Park was a part of the 6th District, where Casten beat out Newman in the Democratic primary and Pekau in the general election.

At Monday night’s village board meeting, Newman and Pekau were all smiles after she was given a community appreciation award.

“I’m sure that a lot of you here are surprised tonight because the congresswoman and I certainly have disagreed on a lot of things,” Pekau said. “But there are things we do agree on – and I’m not talking that we would both do a better job than the current congressman.”

Joking aside, Pekau said that the two agree that infrastructure of the roads and organizations such as the Orland Park-based Bridge Teen Center are important and worthy of federal funding. He said she was key in securing $7 million to fund the widening of 143rd Street, which he said is important not only to Orland Park, but to the southwest suburbs in general.

He said it’s been a project 20 years in the making and a top priority since he took over as mayor in 2017. He said the state was not interested in funding the project, even though it is a state road.

“It shows what can happen when you can solve problems without politics,” Pekau said. “You don’t have to agree on everything to get a lot of good things done. I’m thankful for Congresswoman Newman’s help and support as well as her personal call informing me of the grant.”

In the mid-1980s, Orland Park passed a referendum for a managerial form of government that gives power to the village manager on key decisions.

The board voted Monday night to put a referendum on the April 4 ballot to change that. Since the village manager is an appointed position, not an elected official, Pekau and members of the board say they should be the representatives accountable for big decisions.

The referendum will read: “Shall the Village of Orland Park retain the managerial form of government?”

Pekau and board members said this is not a reflection on current Village Manager George Koczwara, rather it’s to correct some mistakes made in the past and prevent them from happening in the future.

“When I was elected mayor, I thought the responsibilities belonged to the mayor, who is elected and accountable to the people,” Pekau said. “One trustee actually said to me ‘you have no authority here – you are only here to cut ribbons.’

At the time, Joe La Margo was the village manager and he and Pekau disagreed on many issues. Pekau said he was locked out of some village offices.